Israelis were caught in a storm of emotions this week, with many rejoicing the relocation of the US Embassy to Jerusalem and other wins while others are sickened by celebrations while Gazan protesters are killed. 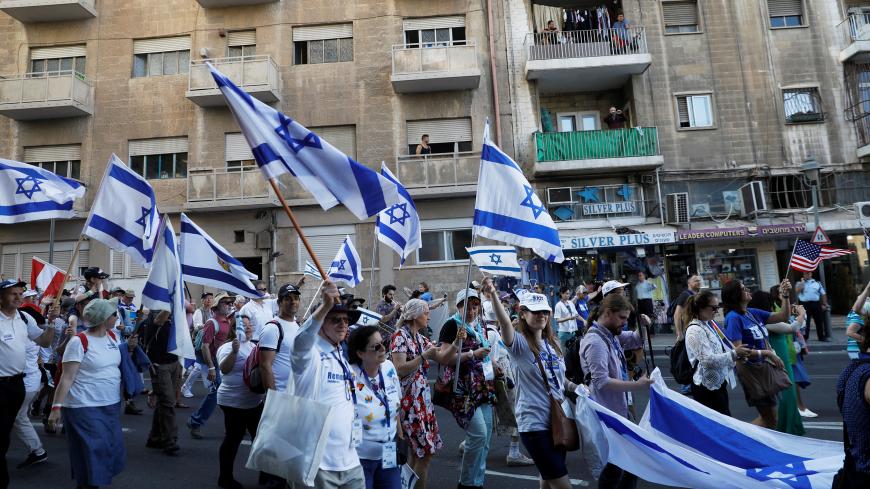 People take part in the March of the Nations in which Christians from around the world and Israelis protest against anti-Semitism and in support of Israel, Jerusalem, May 15, 2018. - REUTERS/Ronen Zvulun

This week's events have thrown Israelis into emotional turmoil. The American decision to relocate its embassy to Jerusalem on May 14 triggered large-scale demonstrations on the Israeli-Gaza border. Over the past few days, live media broadcasts kept switching from the Jerusalem ceremony to the riots in Gaza, with breaks to focus on Israel winning the Eurovision Song Contest.

Tens of thousands of people celebrated Israel’s Eurovision win at Rabin Square in Tel Aviv May 14. But while the winning singer Netta Barzilai appeared on stage, some Israelis saw the celebration as inappropriate given the tensions in the south, where the Israel Defense Forces (IDF) were busy fending off the attempts of thousands of Palestinians to breach the border fence, killing over 60 of them.

“I’m not sure that a day in which people were killed on the Gaza border is appropriate for Eurovision celebrations. For your consideration, Netta Barzilai,” tweeted television personality Amnon Levi, angering many. Prominent among the many furious online responses were refrains of the national narrative defending IDF soldiers and assertions that those trying to break through the fence were asking for it and that Hamas is responsible for their deaths. Many commenters wrote that Israel should celebrate its victory, showing that life goes on despite the events at the Gaza border.

A wish for normalcy and escapism enable Israelis to persist in a country rife with terror attacks, wars and tension. Aya-Lev Hashilo of Tel Aviv, who participated in the event at Rabin Square, admits to escapism. “I don’t watch the news out of principle,” she told Al-Monitor. “The news only shows what’s wrong here and thus I didn’t really know about the events [in Gaza]; a friend just updated me here at the square. It made me feel bad, but I don’t see the connection between the celebration at the square and events in Gaza. We should be happy about winning the Eurovision and we can process the other things separately. Netta Barzilai as a personality represents a positive spirit and I prefer to focus on this and not on the bad things.”

Regarding the ceremony marking the transfer of the American embassy to Jerusalem, she added, “I’m a patriotic lefty. On the one hand, I was excited that the embassy was moved to Jerusalem, where I was born, but the joy isn’t complete because of the dirty politics and the uncertainty about [President Donald] Trump’s interest in this issue. I don’t see a reason to rock the regional boat right now, which is not exactly calm as it is.”

“I’m really happy and proud about the Eurovision,” said Ela Harel of Tel Aviv, “but the events in Gaza cast a shadow on it, and so I’m a little less proud. As I see it, the opening of the embassy is an unimportant event compared to the loss of life, perhaps even cynical and unnecessary given what’s happening. Netta Barzilai the singer made us feel connected to the message that Israel is sending through her — a message of equality and accepting diversity, a message that contradicts what the world sees in Gaza. The situation here is very complicated and very complex; there are a lot of contradictions. The events now truly reflect this complexity.”

Former Knesset member Mohammed Baraka, an Arab-Israeli, was incredulous in a radio interview, asking, “How could the public in Israel not protest an army that massacres civilians?” Nevertheless, many in Israel are not at all convinced that those killed were innocent civilians.

“True, many were killed there, dozens, but any other Western army would have killed hundreds if people tried to break through its border, shoot at it and set off bombs,” Illon Shalev of Shoham told Al-Monitor. “I trust the IDF’s efforts not to hurt the innocent and its ability to investigate a shooting if there are soldiers who don’t obey commands and try them, like in the case of Elor Azaria. Also, as a native Jerusalemite, I was very excited to see the transfer of the embassy to Jerusalem.”

Oren, a student from Rishon LeZion who asked that his full name not be published, explained in a conversation with Al-Monitor that he identifies with the soldiers serving at the front line in Gaza. “Like most Israelis, I too was a soldier in the IDF, and so I fully identify with the army. Some of the journalists just don’t understand how things work, how the army works and how many authorizations you need to start shooting.”

Tzvia, a mother of combat soldiers from Jerusalem, told Al-Monitor that she “commanded” her sons to oppose terrorists and not to endanger themselves. “I wish we could clarify to the Palestinians that our problem is not with them, but only with Hamas and with terrorism.”

Many social media users expressed approval at the high number of Palestinian casualties, who they broadly defined as terrorists. Rina Korah Sagir of Jerusalem is angry about this attitude. “Where does this crazy joy at the death of human beings come from?” she commented to Al-Monitor. “They are creations of God, who created us all. Even in the book of Proverbs, there’s a command that says, ‘Do not delight at the fall of your enemy, do not rejoice at his failure.’ Enough with this hatred.”

Much like the Gaza crisis, the US Embassy move has also evoked deep feelings on the Israeli street. Eli Avraham, a former resident of Jerusalem, claims that the location of the new embassy at the southern Jerusalem Arnona neighborhood is symbolic and special. The Americans, he said, will be able to observe both parts of the city and take in the complexity of the situation. Ali Dabash of the nearby Sur Baher village on the outskirts of Jerusalem agrees. This specific location will show the Americans all the difficulties and gaps between the rich, well-developed Israeli part of the city and the neglected Palestinian part, he believes. "This might in fact make the Americans a bit more objective in their approach to the conflict," he said. "We are certainly not celebrating the embassy relocation, but some of us are just tired of protesting things we are unable to change."

The Eurovision win came as yet another triumph for Israel, which was already in a state of euphoria over the military and diplomatic successes against Iran. The transfer of the American embassy to Jerusalem is seen by the full political spectrum as a correction of a historic wrong. The terrible events at the Gaza Strip have soured the celebration, reminding Israelis that even though it withdrew from Gaza in 2005, the problem hasn’t been resolved there. Hundreds of thousands live in poverty there with no hope, controlled by a terrorist organization armed with missiles.

Nevertheless, Israelis, long accustomed to international criticism they consider unfair, will continue to argue among themselves but back the IDF and look for more reasons to celebrate.