What's next in Israel-Palestinian conflict?

With Israel riding high after a series of political and military victories, and the Palestinians having suffered 60 deaths on the Gaza border at the hands of the IDF, observers wonder what's next for the leaderships on both sides. 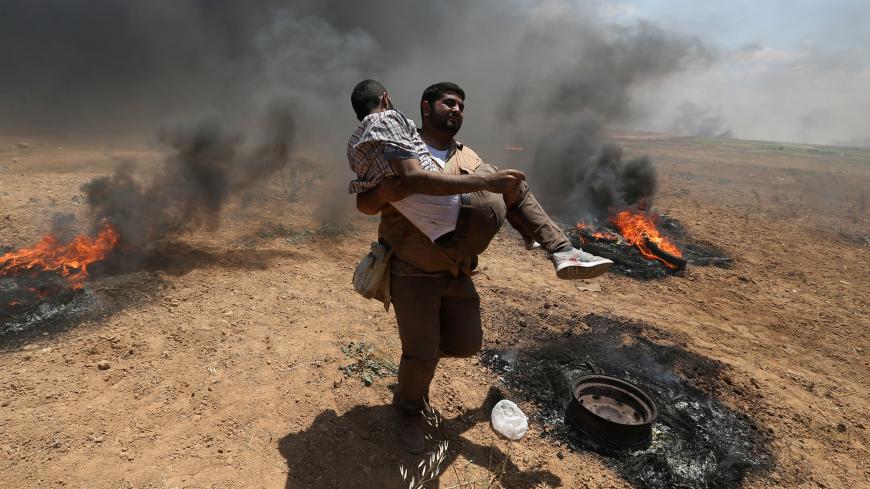 A wounded Palestinian demonstrator is evacuated during a protest against the move of the US Embassy to Jerusalem and ahead of the 70th anniversary of the Nakba, at the Israel-Gaza border in the southern Gaza Strip, May 14, 2018. - REUTERS/Ibraheem Abu Mustafa

The distances from Tel Aviv and Jerusalem to Gaza have never seemed so great, although they are only a few dozen kilometers. Less than an hour’s drive separates the three locales. On May 14, three events, from seemingly distant planets, took place in them almost simultaneously.

In Jerusalem, the US Embassy was inaugurated with much fanfare, national pride and religious ritual, both Jewish and Christian. In Tel Aviv, secular liberal Israel celebrated Netta Barzilai’s win at the eminently popular Eurovision song contest. Meanwhile, Gaza counted at least 60 Palestinian deaths at the border, after the Israel Defense Forces (IDF) spent the day fighting tens of thousands of Palestinians attempting to reach or break through the fence at what has been billed as the Great Return March. Thus, the national capital was filled with hymns, flags, prayers and festive speeches; the cultural, secular and free-thinking capital was replete with pop, trash and colorful costumes; and besieged Gaza was filled with fire and blood.

The IDF is now conducting two active, open military conflicts, albeit at relatively low intensities. In the north, the conflict with Iran turned into a day of real warfare May 10 and was crowned with a decisive Israeli victory. In the south, however, seven successive weeks of Palestinian marches to and assaults on the Gaza border fence were blocked by an “iron wall” of snipers that the IDF erected.

“Yesterday’s activity [at the border fence] was completely different than the earlier weeks,” a senior Israeli officer told Al-Monitor on May 15, speaking on condition of anonymity. “We expected the 100,000 people that Hamas promised to bring, and only around 40,000 were there. But the violence level was still much higher than we had become accustomed to in the previous weeks.”

According to the officer, the demonstrators were dispersed at 13 different locations along the length of the fence. “Among them were several cells from Hamas’ elite Nukhba unit, breakthrough cells,” he said. “Three of these units were halted at the fence itself in battles against the IDF. As far as we know, they incurred about 10 casualties, but not a single Palestinian crossed the fence. Our guiding principle — that the Gaza border fence will not be harmed and not a single Palestinian will cross it to the Israeli side — has been meticulously safeguarded.”

This article is being written the morning of May 15, as both sides gear up for another day of battle. It is Nakba Day, the day on which the Palestinians memorialize the tragedy they suffered in 1948 — a resounding defeat in what for Israelis is their War of Independence. The IDF’s current assessment is that the height of the struggle is behind them and that Hamas is recalculating its approach.

According to a highly placed Israeli military source speaking on the condition of anonymity, “They understand that they have reached a dead end. They were not successful in setting the West Bank on fire, it was almost completely quiet there yesterday. They were not successful in awakening the world but only convinced such already convinced people as Turkish President [Recep Tayyip] Erdogan. They were not able to cross the fence, they were not able to resolve their problem and the futility of their situation. It is clear to us that they are searching for an alternative.”

On the morning of May 12, Ismail Haniyeh, head of Hamas' political bureau, flew to Cairo for talks via Egyptian helicopter. On the morning of May 15, the Egyptians opened the Rafah border crossing in coordination with Israel. In a surprising decision, the Israelis on the night of May 14, close to midnight, authorized the opening of the Kerem Shalom crossing the following day, through which merchandise and supplies can reach Gaza.

“We will enable the transfer of medical equipment, fuel and lots of supplies, to help them recover,” a senior Israeli officer told Al-Monitor, speaking on the condition of anonymity. “It also might help them climb down from the tree [of continued demonstrations].”

The question of questions is where do both sides go from here. If, indeed, the scope of the demonstrations and the number of injuries declines on Nakba Day, both the Israelis and Palestinians will have to decide where they are headed. The two leaderships will have to make hard decisions. Since the end of the 2014 Israel-Gaza war, there has not been such a clear watershed as now, with the sides perhaps prepared to change their strategic positions. It is doubtful, however, that the leaderships of both sides are prepared to climb down from the tree simultaneously.

Despite the intense demonstrations and large number of victims, euphoria has swept Prime Minister Benjamin Netanyahu’s Israel in recent days. Netanyahu has never enjoyed such a positive week in his entire career, not even when he scored his greatest political victories. It began with the now-famous presentation in which he showed the world the Iranian nuclear archives stolen by Mossad in the heart of Tehran and brought to Tel Aviv. It continued with President Donald Trump’s announcement that he was abandoning the nuclear agreement with Iran, a proclamation that aroused immense joy in Israel. That was followed by the day of warfare between Israel and Iran, in which the Iranians were unable to inflict any damage on Israel but instead absorbed a strong blow to the infrastructures it had built over the last months on Syrian territory. On the night of May 12, a young Israeli singer won the Eurovision song contest. After conquering Europe, Netta Barzilai drew tens of thousands of Israeli celebrants to Rabin Square in Tel Aviv for a giant celebration May 14. Meanwhile, the US Embassy moved from Tel Aviv to Jerusalem on May 14 in a ceremony described as “messianic” by some on Israel’s secular, liberal left. Netanyahu rose to heights he had never before attained. The criminal investigations against him have been almost totally forgotten, and he seems more unbeatable than ever.

Netanyahu could have envisioned two sorts of moves concerning Gaza. He could have encouraged the Palestinian Authority to come down from its tree and grasp the reins of civil administration in Gaza, or, alternately, he could have championed indirect negotiations with Hamas over a long-term cease-fire. Given the current state of affairs, however, it is difficult to imagine Netanyahu leading any sort of meaningful reconciliation-process vis-a-vis Hamas, which over the last few months had dispatched several proposals in this vein in Israel’s direction but did not receive an answer.

Before agreeing to any kind of negotiations, Israel is demanding that Hamas return the bodies of two Israeli soldiers, Hadar Goldin and Oron Shaul, and release three Israel civilians it is holding in Gaza. This is where the two sides are stuck. Will the eruption of the border-fence violence and high number of casualties on the Palestinian side help both sides free themselves from their shared cul-de-sac? The answer will come in the following weeks. Probably not.