Senior Fatah leaders have suggested that Prime Minister Rami Hamdallah temporarily fill the role of Palestinian president as a compromise to prevent succession battles between the movement's various factions. 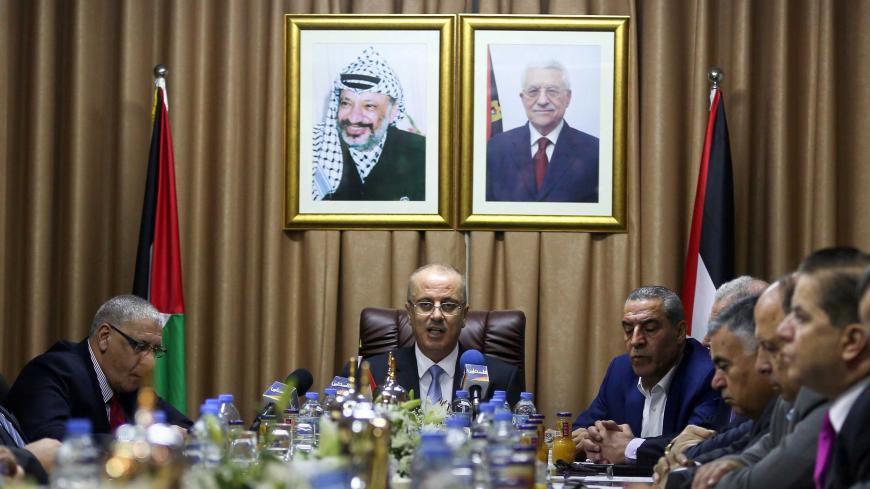 Palestinian President Mahmoud Abbas' speech to the Palestinian National Council April 30 drew harsh criticism from Israel, Europe and the United States. He was criticized and accused of making anti-Semitic statements at home as well. But even before Abbas delivered his embarrassing and scandalous speech, some in the Fatah movement had started to speak about the need to replace him. After the speech, what had been limited to private conversations suddenly became public in the Palestinian Authority (PA) and throughout the world. It was not his anti-Semitic remarks that tipped the scale and led many Fatah activists to the conclusion that it was his time to go, but rather the state of the PA and his inadequate functioning, which can no longer be concealed. The international condemnations, including a blistering editorial in The New York Times that declared it was time for him to vacate his seat, reinforced the sense that Abbas is no longer functioning and that in addition to the issues brought about by his advanced age and deteriorating health, he doesn’t truly perceive the reality of the PA under his leadership.

The problem is that during the long years of his rule, since he succeeded PLO leader Yasser Arafat in November 2004, Abbas made sure to sideline any prominent Palestinian figure in his movement out of fear for his exclusive leadership. He expelled Mohammed Dahlan from the movement, exiled him from the West Bank and pursued his loyalists, who went underground. A few of them preferred to move to the Gaza Strip and live under Hamas rule, such as Sufian Abu Zaida, a former minister of prisoner affairs, so as not to live in constant fear that Abbas’ people would come knocking.

Abbas also made sure to limit the power of Jibril Rajoub, who had claim to the throne. He demoted him from national security adviser to chairman of a sports association, so that he would not deal with the really big issues.

Even Yasser Abed Rabbo, not a Fatah man but a loyal associate who was considered Abbas’ close adviser until three years ago, was humiliatingly dismissed from his role as the secretary general of the PLO Executive Committee.

When pressure mounted on Abbas within his movement to appoint a successor, he lobbied for Mahmoud al-Aloul — a controversial figure — as his deputy. Aloul was responsible for Fatah's militant faction Tanzim and is not the man to unify Fatah, shake up the PA or ensure a realistic diplomatic vision for West Bank residents. He could give in to factionalism and turn the succession battle between Dahlan and Rajoub and their people into a bloody struggle. His opponents in Fatah argue that even now there are militant groups under his command, mostly young people who served under him and are still loyal.

Senior Fatah leaders, wishing to prevent succession battles between the camps, have already started to seek a compromise candidate who could fill the role of chairman temporarily until Fatah decides on a mechanism for choosing a new chairman that would be acceptable to everyone.

A compromise proposal being considered is Prime Minister Rami Hamdallah, a former university president who has served in his position for the five years since his predecessor Salem Fayyad was ousted by Abbas. Fayyad, who fought corruption in the PA and succeeded in eradicating a large part of it, said in an interview with The New York Times after his firing: “It is incredible that the fate of the Palestinian people has been in the hands of leaders so entirely casual, so guided by spur-of-the-moment decisions, without seriousness.” These remarks have rung all the more true as Abbas has led the PA.

Fayyad found the way to fix PA institutions and manage its budgets with transparency, refraining from funneling money or granting jobs to associates and central activists in Fatah. Hamdallah, his successor, continued in this direction.

Two weeks after his appointment to the job, Hamdallah submitted his resignation to Abbas because he thought that Abbas and senior leaders of the Fatah movement (of which Hamdallah is not a member) were trying to rein him in and to prevent the proper conduct of the government, especially control over the PA’s budget. The threat worked. Abbas promised not to interfere and Hamdallah stabilized a Palestinian government comprised of technocrats that survived despite all the difficulties and obstacles placed in its way.

From an Israeli perspective, Hamdallah is remarkable for establishing good relations with Israeli Finance Minister Moshe Kahlon. In the last year, the two met in Ramallah and Tel Aviv at least four times to advance joint economic projects.

His quiet character, his professionalism and the seriousness with which he takes his job give the sense to most of the Palestinian public in the West Bank that he holds the position with responsibility and devotion and is driven by national patriotic motivations. It's all earned him great popularity, much more than Abbas, who according to all the polls the public wants to see vacate his seat. Still, it seems that most of his potential opponents still fear to challenge Abbas, who was re-elected as chairman of the PLO's Executive Committee on Friday. He was the only candidate.

Hamdallah is not a Fatah man. He doesn’t have his own corps or a group of supporters to get him appointed. But he will prevent fratricide. Hamdallah has not been asked whether he wants the job, but the middle generation of Fatah leaders believes that if he is asked to take it to help his people, he will answer the call — on the condition, of course, that Fatah leaders who see themselves as also suited to the job don’t make his work bitter.

But Hamdallah survived an assassination attempt two months ago in Gaza. We can assume that he would not want to risk his life for a task that on paper, at least, seems impossible: leading the PA and somehow pleasing the whole world.