How Israel’s ongoing violation of Oslo Accord threatens security

Under the pretext of security interests, the IDF violates the Oslo Accord nearly every night by entering West Bank areas nominally under Palestinian control, humiliating Palestinian police and threatening ongoing security cooperation. 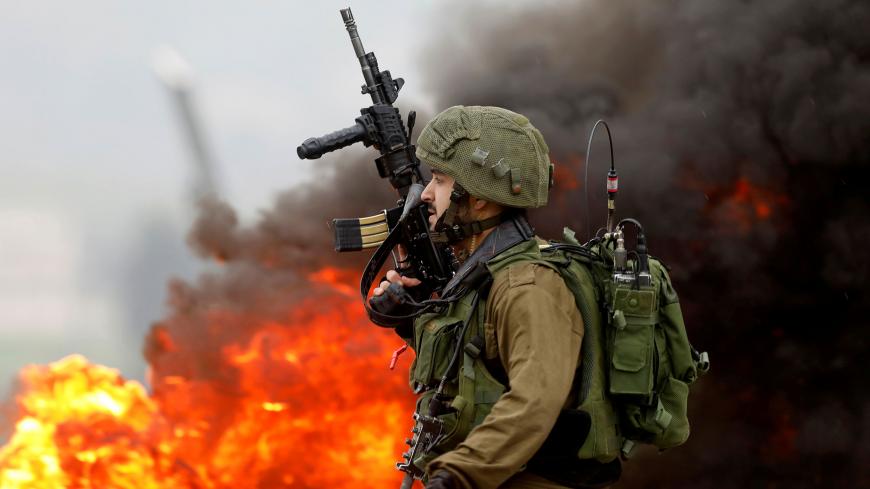 Staff Sergeant Ronen Lubarsky was the first soldier from the elite Duvdevan unit to be killed in conflict with the Palestinians since the unit was established 32 years ago. The other 17 casualties were killed by friendly fire and accidents. On May 24, in the course of arresting wanted men in a refugee camp near Ramallah, in Area A, where the Palestinian Authority (PA) holds security responsibility, a heavy marble slab was dropped on Lubarsky, and he was fatally injured.

Minister of Defense Avigdor Liberman said in his eulogy, “Duvdevan, one of our elite units, makes many arrests every night in an incessant war, which has no glory and no publicity.” Other government representatives spoke of how essential these operations are for defending Israel’s security.

Is that so? The Israel Defense Forces (IDF) seems to have a long list of wanted men, and it routinely sends this unit into Area A, which makes up about 18% of the West Bank, to find these people to take their testimony or to arrest them for trial or hold them in administrative detention. Despite the 1995 interim accord between Israel and the PLO, under which the Palestinians are to be responsible for their internal security, the IDF conducts itself in Ramallah and elsewhere as it does in its own territory.

Israel honored the agreement and left their internal security in the hands of the Palestinians for less than six years after signing it. With the election of Ariel Sharon as prime minister in 2001, and the second intifada and Operation Defensive Shield in 2002, it was decided that Israel would no longer honor its signature on the interim agreement, since the Palestinians violated their commitment outlined in the document.

Sixteen years have passed since then. The security cooperation between Israel and Palestinian security forces has greatly increased. The level of security in the West Bank has improved beyond recognition. Every so often there’s tension and a spate of violence, but usually the situation is under the Palestinians’ control. Nevertheless, Israel violates the second Oslo Accord by sending its security forces into the Palestinian territories. And though the second intifada ended with the Cairo Agreement between Hamas and Fatah and cooperation with the Palestinian security services, the IDF has not stopped its arrests in Area A.

Israel’s wanted list includes young Palestinians suspected of carrying out terror attacks or planning them. When the Israeli security establishment believes that an arrest could prevent violence, it acts on its own accord, not trusting the PA to hand wanted persons over and unwilling to share the grounds for its suspicions. Israel finds many aspects of the interim agreement convenient, but permits itself to act on the ground as if the agreement doesn’t exist, making it impossible for the security establishment to return security responsibility to the PA.

Former PA Prime Minister Salam Fayyad told me that the “two bones in the Palestinian throat” are the continued construction in the settlements and the nightly incursions of the IDF into Palestinian cities. According to him, from the moment Israel withdrew from the Gaza Strip in 2005, it stopped arresting people there, even though it still has lists of wanted men in Gaza, and it should apply the same approach in the West Bank. “You don’t understand the situation in which you put the Palestinian Authority when you act in Area A as in your own territory, and our policemen stand on the side, helpless and humiliated. These arrests damage the success of security coordination, which is important to you and important to us, and you must stop them,” he warned.

The most right-wing government in Israel’s history has not announced the nullification of the Oslo Accords or the laws stemming from these agreements. As long as it is interested in their continued existence — and it must be, allowing the funding of the PA’s budget by donor nations, continuing security coordination and enabling settlement construction by not explicitly prohibiting it — it’s best not to violate it almost every night.

It’s hard for the public to know the scope of these activities. Are these wanted men really people whose arrest would save lives? Is the IDF operating on suspicions? How many of those arrested are later released without any legal proceedings, and how many of them are ultimately prosecuted for minor offenses? Most of the public tends to think that if Israel bothers to send its army in the middle of the night to arrest sleepy people in the West Bank and endanger its soldiers, the targets must be dangerous. No one's telling us for the sake of whose capture the soldier was killed last week, what he was suspected of, and we don’t ask for the justification of the price for Israel's constant violation of the accord.

Fayyad no longer serves as Palestinian prime minister, but what he had to say was worthy of hearing then and is still today: These routine nightly raids must stop. Letting go of control of the refugee camps in the West Bank is painful, but just as Israel got used to giving up control of those in Gaza, it can manage to let these ones go as well.