Can Israeli-Turkish rift be mended?

With the latest mudslinging between Israeli and Turkish leaders following the killing of at least 62 Palestinians by Israeli forces in Gaza, some in Israel are calling for a tougher approach toward Ankara instead of holding back in an effort to maintain proper relations. 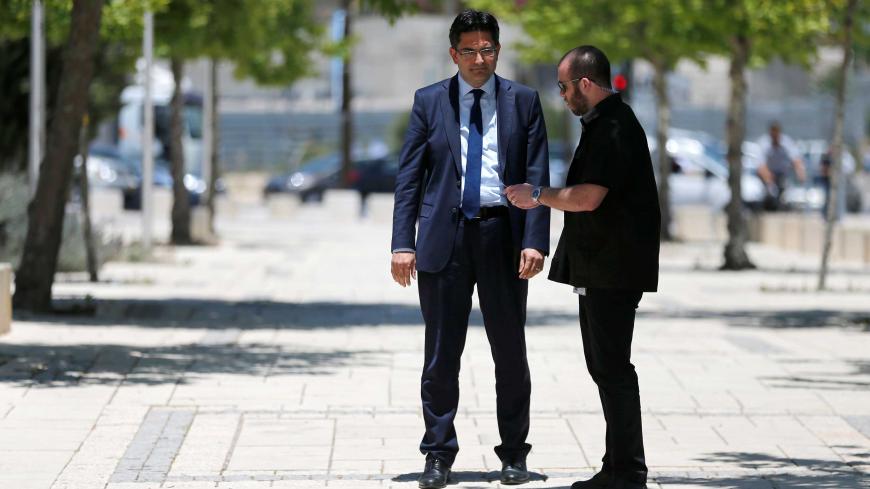 A security officer speaks with Turkey's charge d'affaires, Umut Deniz, as he arrives at the Israeli Foreign Ministry in Jerusalem, May 16, 2018. - REUTERS/Ammar Awad

It looks like the current squabbling between Turkey and Israel is more serious than previous rounds of tensions. The violence along the Gaza border fence has brought out the best of Turkish President Recep Tayyip Erdogan. This time, however, he faces a Prime Minister Benjamin Netanyahu who is far more belligerent than in the past.

After learning of Israeli soldiers having killed dozens of Palestinians in Gaza on May 14, Ankara recalled its ambassador to Israel for consultations. Later in the day, Erdogan publicy declared Israel “a terror state.” Netanyahu tweeted in response, “Erdogan is among Hamas’s biggest supporters and there is no doubt that he well understands terrorism and slaughter. I suggest that he not preach morality to us.”

Erdogan then took the rhetoric up a notch, tweeting, “Netanyahu is the PM of an apartheid state.” Netanyahu shot back, “A man whose hands are stained with the blood of countless Kurdish citizens in Turkey and Syria is the last one who can preach to us about combat ethics.” Erdogan tweeted, “Hamas is not a terrorist organization, and the Palestinians are not terrorists.” Here, at least, Erdogan had some problems with the facts, as most Western nations consider Hamas a terrorist group.

The dustup was not relegated to verbal sparring. After Netanyahu’s first response, Ankara ordered the Israeli ambassador to Turkey, Eitan Na’eh, to leave within 24 hours. Israel then expelled the Turkish consul in East Jerusalem, who is responsible for relations with the Palestinians. Erdogan countered by expelling the Israeli consul in Istanbul.

Next came the humiliation of Na'eh being body searched at Istanbul Airport in front of local media on May 16. A few hours later, Turkey’s charge d'affaires, Umut Deniz, was summoned to the Foreign Ministry in Jerusalem and asked to show his ID before being allowed to enter.

As all this unfolded, almost every major political figure in Israel, including Yesh Atid’s Yair Lapid and the Zionist Camp’s Avi Gabbay, added fuel to the fire. Lapid called the 2016 Israeli-Turkish reconciliation agreement a “diplomatic mistake.” Meanwhile in Turkey, opposition parties demanded that Erdogan sever diplomatic relations. It was just another day in the turbulent history of tattered relations between the Muslim Brotherhood’s Turkey and the right wing's Israel. The alliance between the two countries belongs to a bygone era, back when Turkey was a secular nation and its army's purpose was to “defend the constitution and democracy.” No more.

A complicated dilemma is currently unfolding for Israel behind the scenes. The crisis with Turkey publicly erupted with the 2010 Mavi Marmara incident. It took six years and enormous effort, including the intervention of President Barack Obama, before the two sides signed the reconciliation agreement, in June 2016. Israel paid $20 million in reparations to the families of the Turkish citizens killed aboard the ship, while Turkey agreed not to take legal action against the Israeli officers and troops involved in commandeering the boat, which was headed to Gaza on a humanitarian mission. Both countries' ambassadors then returned to their respective posts.

Now there are calls in Israel to stop clinging so desperately to Turkey and to go “head to head” with Erdogan. The Israeli right openly claims that Erdogan only understands force, while the center left shares this assumption, if only more tacitly. Lapid has called on Israel to recognize the Armenian genocide, something that Israel has never done because of pressure from Ankara and a desire to maintain correct relations. Furthermore, people like former Likud Minister Gideon Saar and Netanyahu’s former Cabinet Secretary Zvi Hauser have been calling on Israel to recognize the Kurdish enclave in northern Syria and provide it with support against Erdogan. In other words, they want Israel to be more proactive on behalf of its own interests in the region while striking a blow to Erdogan’s soft underbelly.

Thus, Netanyahu faces a dilemma. As someone who has spent the last year operating according to the dictates of his electoral base, and who has followed every whim of Education Minister Naftali Bennett in particular and the right in general, Netanyahu has tended to take a more extreme position in his dealings with Erdogan. Netanyahu has never been so comfortable internationally as now, with massive and absolute support from the United States, assistance behind the scenes from many of the Arab states in the Sunni alliance and almost no political alternative to his government at home. It is not at all clear, however, that severing relations with Turkey is the right thing for Israel to do at the moment. To illustrate why, take the case of Saleh al-Arouri, the Hamas figure presumably managing the group’s military wing on the West Bank.

Qatar expelled Arouri, so he moved to Jordan, spent time in Lebanon and finally found refuge in Istanbul. Israel has been pressuring Turkey to limit his movement and even expel him, with Israeli intelligence providing evidence of his directing terrorist activities from Turkish territory. According to various intelligence sources, the Turks dragged their feet for a while, but ultimately cooperated. Netanyahu does not want to give Erdogan a reason to turn Turkey into the newest sanctuary state for senior Hamas officials, who have been forced over the past few years from one country to another by Israeli and international pressure.

On the other hand, Turkey has been intensifying its involvement in East Jerusalem affairs and on the Temple Mount, or Haram al-Sharif. While Jordan is supposedly responsible for the activity of the Islamic Waqf, the religious custodian of the Haram al-Sharif, Erdogan is well aware that the Hashemite kingdom’s influence has been in steady decline. In other words, he saw a vacuum being created there and began taking advantage of it. The expulsion of the Turkish consul was, therefore, a blow to the Turks and their growing interests in the city and in general.

According to Israeli intelligence, over the past few years Turkey has been pouring millions of dollars into various Islamic organizations active on the Haram al-Sharif in an effort to replace those that Israel declared illegal, like the Murabitoun and the Murabitat. These two groups, allegedly responsible for protecting the Muslim holy sites, organized patrols of men and women to keep Jews from wandering around the area. Once Israel shut them down and removed them from the compound, alternative groups were created to take their place. Some of these groups were initiated and funded by Turkey.

The current assessment is that Netanyahu will not stir the pot but will let the crisis with Turkey die down on its own, until the next time. Even as they expelled Na’eh, the Turks quietly insinuated that they were not downgrading relations, but that the ambassador was being asked to leave “for a while.” Israel is fully aware that Erdogan faces a tough election on June 24. He needs an external villain to help him regain his standing domestically, following the collapse of the Turkish currency and other problems. Given this, it is not clear why Netanyahu is allowing Erdogan to benefit so publicly from the crisis, and at such a low cost, by responding to his provocations. It could be because Netanyahu is also anticipating a new round of elections. This is what it looks like when the highest interests are personal political considerations.