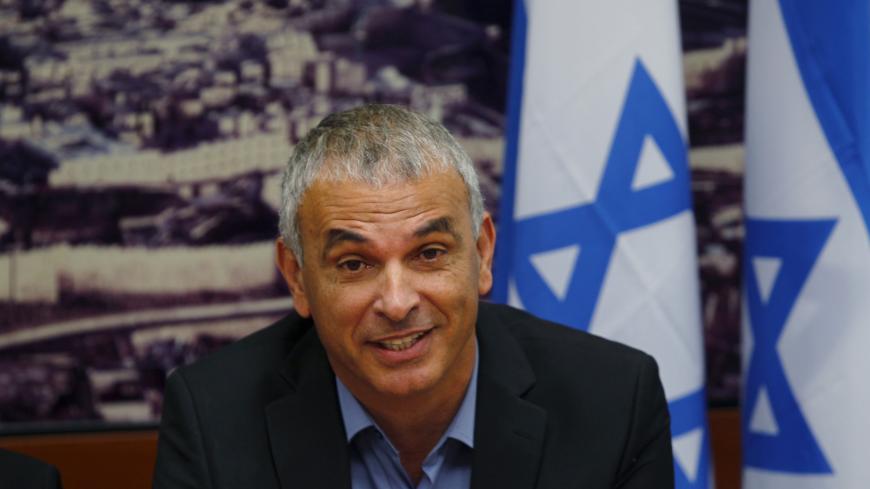 It took three years and a day from Moshe Kahlon's swearing in as Israel’s finance minister to his finally being able to breathe easily. The latter occurred on May 15, when the Central Bureau of Statistics (CBS) reported the first drop in housing prices in a decade.

According to the data, there has been a steady decline in housing prices over the past year, totaling 0.1%. This is hardly a revolution — the cost of apartments in Israel remains high — but it could be cause for optimism as far as many young couples are concerned.

For Kahlon, also chair of Kulanu, the decline is especially good news at this time, as it is obvious that the current government has started counting down to the next election. It would have been a major problem for the man who demanded the Finance Ministry, and gained unprecedented powers so he could fulfill his campaign promise to lower the cost of housing, if the real estate bubble continued to expand out of control. In fact, during Kahlon's first two years in office, housing prices steadily rose, causing him considerable damage in the polls. In some polls, Kulanu lost as many as half of the 10 seats it won in the 2015 election.

That is why the new data is not only good financial news for those looking to buy a home, it is also important political news. In fact, the decline in housing prices is Kahlon’s entry ticket to the next election cycle as an important player. If Kahlon knows how to turn this into an effective election campaign issue — and he has proven in the past that he knows how to operate in that manner — Kulanu is here to stay, at least for another term.

It was impossible to ignore Kahlon’s declarations of victory, whether through social networks or traditional media. While the finance minister tried to show restraint, it was hard not to hear the relief that accompanied his statements. In one press release from his office, Kahlon said, “This is not a victory for me or anyone else. It is a victory for young couples who can finally get an apartment of their own after so many years. At first, everyone said it was impossible. The market was on fire, and there was no chance of impacting the cost of housing, but we did it. … To all the skeptics who attacked us and said that it is impossible, it is time to come to terms with the new reality.” This statement was directed at everyone who had mocked Kahlon, including economic pundits and political rivals, who were waiting behind the corner hoping to see him crash.

Speaking to Al-Monitor on May 17, Kahlon said that he always knew he would be able to lower housing costs, with the same strategy he used to lower cellphone costs when serving as telecommunications minister (2009-11), by introducing an organized plan right after the election. “I did it for young couples,” he said.

The good news that the CBS provided Kahlon came during a week in which diplomatic and security issues dominated the news cycle: Gaza, Turkey, the US Embassy's move to Jerusalem and the ongoing conflict with Iran. Despite all that, the finance minister made his way onto the media agenda and celebrated his victory with a series of happy interviews.

When Kahlon gets stronger, it usually means that Prime Minister Benjamin Netanyahu is on the lookout, watching carefully. Because a politically weak Kahlon would not be interested in early elections, as long as he trudged in place publicly and politically, Netanyahu considered him the strongest link in his government whenever a coalition crisis led to talk of early elections. That's what happened during the Israel Broadcasting Corporation crisis in spring 2017. One year later, in April, it was Kahlon’s tenacious insistence on the government remaining in power that prevented Netanyahu from breaking the coalition apart and holding elections at a time convenient for him.

Given the current state of affairs — with Netanyahu at the height of his political and public power and before the criminal investigations of him have come to an end — Kahlon will no longer be the one to prevent early elections. On May 15, Kahlon became ready for the next election no matter when it happens. The predominant assessment in the political arena and in the finance minister’s immediate circle is that the election will be moved up to early 2019. In other words, the Knesset will go on recess in about two months and then call for elections as soon as it returns.

There are some people who think that under certain circumstances, Kahlon could lead the country, or that's what a very flattering article in Bloomberg’s Businessweek concluded in March. The headline read, “The Arabic-Speaker Who Might One Day Lead Israel.”

This particular angle is based on the excellent relationship that Kahlon has with senior officials in the Palestinian Authority (PA), including Prime Minister Rami Hamdallah, with whom he has met at least twice in the last year. Kahlon grew up speaking Arabic, and he makes use of his language skills whenever he meets with Palestinians. This is an important icebreaker and helps to foster a personal relationship between the parties. Add to this Kahlon's personal charm and his direct contact with people, without intermediaries, and one has the most popular Israeli minister among PA members during a complicated and tense period, in which the Palestinians are boycotting the Americans. The many meetings that Kahlon has had with senior Palestinian officials are his own achievement and evidence that they regard him as a major player in Israeli politics.

In addition to all this, Kahlon has also been developing a warm relationship with US Treasury Secretary Steven Mnuchin, with whom he met in his office May 14, after the embassy ceremony. It was their third meeting since President Donald Trump took office.

The Bloomberg article appeared at a time when Netanyahu was up to his neck in criminal investigations. Kahlon was mentioned as one of the possible candidates to succeed Netanyahu as prime minister because of the government’s instability and all the corruption scandals swirling around Netanyahu. Two months later, Netanyahu is still caught up in a series of corruption scandals, but his public, political and diplomatic standing is stronger than ever.

It now looks like Kahlon will be a fascinating major player in every potential scenario. For now, he has a good working relationship with Netanyahu, even if that relationship is based on mutual distrust. Each man knows how politically adroit the other can be. The higher Kahlon rises in the polls, the more likely he is to become a key player in the next government, with or without Netanyahu.