Will Israel's finance minister be able to lower housing prices?

During his election campaign, Finance Minister Moshe Kahlon promised to lower housing prices, but is now finding it hard to fulfill his promise and working to lower the expectations of his disappointed public. 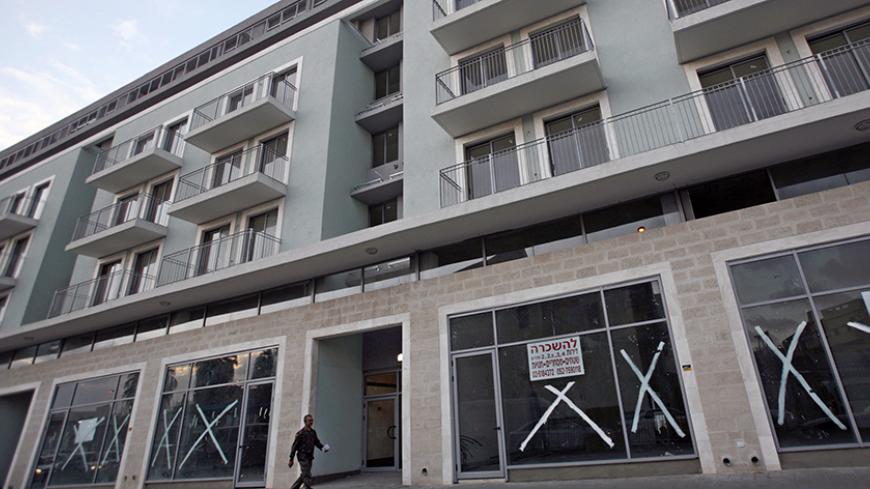 A man walks near a For Rent sign posted on a newly-built residential building in Jaffa, just south of central Tel Aviv, Jan. 4, 2010. - REUTERS/Gil Cohen Magen

“Nothing is going to be like it was 10 years ago,” admitted Finance Minister Moshe Kahlon when he was asked on Army Radio whether he agrees with economists who hold that a moderate reduction in housing prices will be enough to avoid creating an economic crisis. Kahlon said, “I think that’s right. We don’t want to create crises in any area. We want a normal economy.”

The March 3 interview with Kahlon, a year after the March 2015 elections, took place amid reports of a continuing rise in housing prices. Only last month, the government appraiser reported an 8% increase in housing prices in 2015, when the Israeli public still hoped that the real estate bubble had reached its breaking point and was about to burst.

Thus, the finance minister’s statement in this interview, lost in the slurry of political summations marking a year since the election, was a crucial step in setting expectations between him and the public and should have been discussed further.

Kahlon — who marketed himself in his last electoral campaign as a Robin Hood who would significantly reduce housing prices, and possibly believed it himself — is now lowering expectations. It may be that he understands that unlike the cellular communications reform that made him a political star and beloved by the masses, the real estate market depends on many variables and components over which the finance minister has no control.

The anger and frustration of the Israeli public over the increasing cost of housing first exploded during the p rotests of the summer of 2011, and became Israel's most troubling socioeconomic concern. Indeed, housing is the biggest expense for most households, whether in mortgage or rent payments. The previous finance minister, Yair Lapid, who promised to decrease housing prices with the controversial zero-VAT plan, paid for his failure in the last election cycle. Indeed, precious time has been wasted since the summer of 2011 with a variety of promises to reform the housing market, including from the prime minister himself. Last November, the chairman of the Economic Affairs Committee, Knesset member Eitan Cabel, sought to demonstrate at a committee meeting how long the road to a home is getting for young Israelis. He presented data showing that in 2009 one needed the equivalent of 109 monthly salaries to afford a home, whereas today, a similar purchase would take the equivalent of 142 monthly salaries.

This is an increase of more than 31% in the cost of a home. Cabel turned to Kahlon, who participated in the meeting, and asked how this gap could be closed. In response, the finance minister outlined the various plans in the pipeline, including increasing the purchase tax for a second apartment, subsidizing homes for young couples and decreasing the price of land.

You can’t say Kahlon isn’t working on it. He sees decreasing the cost of housing as the most important goal of his term as finance minister, and he’s attacking the problem on all fronts, including opening the local market to foreign construction companies and importing foreign construction workers, lowering the price of land and a real attempt to flood the market with new housing units. He knows that if he fails here, this will be the end of his political career. The problem is that when it comes to plans and reforms in the realm of housing, time is needed for the market to respond to the increase in supply, and prices at the moment are still sky-high.

But the Israeli public has no time. What's more, Kahlon himself made promises galore for an immediate and dramatic change in the unruly real estate market. These promises, combined with his successful record with cellular communications reform, created unrealistic expectations for the finance minister. The public — which listened to Lapid and held off on buying and believed the new finance minister that at any moment the price of housing will drop and everything will be under control — is exhausted and justifiably disappointed at the real estate monster spinning out of control. In the radio interview, Kahlon implored Israelis to “give it a year, two years. You can’t stand next to me with a stopwatch,” and explained that there is cumulative damage that takes time to fix. It’s hard to blame the public, those young couples for staying on the fence because they were promised that prices are on their way down.

This disappointment is reflected in the polls. According to a Channel 2 poll published March 5, Kulanu's approval ratings went down under Kahlon's leadership. The poll showed Kulanu sinking from 10 Knesset seats to seven if elections were held today. The truth is that for Kahlon, the results could be worse, considering that the price of housing continued to rise last year.

What surely frustrates Kahlon is the upswing in his predecessor's ratings, according to the same poll. Yesh Atid climbed to 19 seats, compared to the 11 it got in the last election. What’s amazing is that Lapid was considered an unsuccessful finance minister who inspired much hope but made no significant achievements, and here the public is running back into his arms and giving in to his promises once again. It’s clear that this dynamic — the renewed faith in Lapid and Kahlon’s efforts to get to the next election with a record of success — impacts the stability of the government. Kahlon needs more time, and he is determined not to rock the coalition’s boat in the near future. In the meantime, he’s doing the right thing when it comes to the public: lowering expectations so tiny downward trends in housing prices won't come as a shock.