Both Israeli Prime Minister Benjamin Netanyahu and Finance Minister Moshe Kahlon had no business promising to lower housing prices and there is no solution in sight. 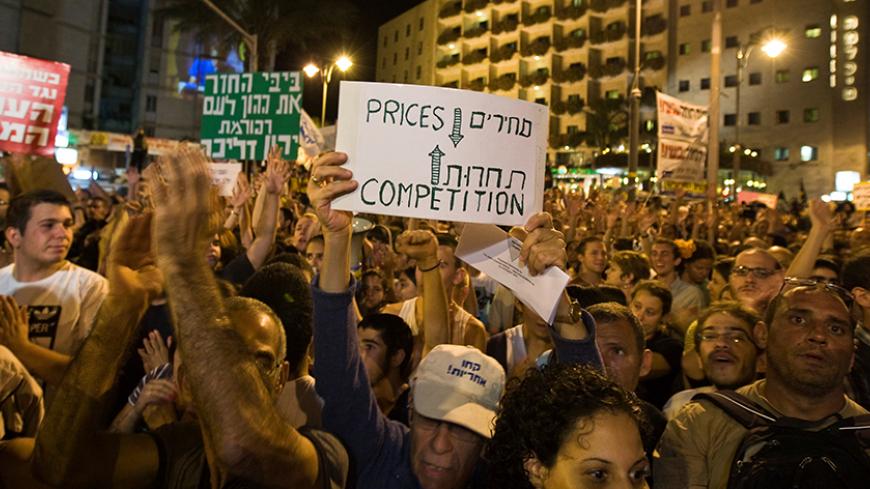 In the summer of 2011, Israeli Prime Minister Benjamin Netanyahu felt the ground under him shake: Hundreds of thousands of Israelis filled the streets in protest over the cost of living and the housing crisis. The number of demonstrators from all walks of life grew with each week, in what became the largest popular protest in the history of the State of Israel.

In his efforts to stop the protest, which threatened to unseat him, in July Netanyahu convened a press conference with Minister of Housing Ariel Atias (Shas) and Minister of Finance Yuval Steinitz (Likud) at his sides.

One could spend a week recalling all the promises and big schemes formulated ad hoc for the emergency plan to lower housing prices, such as authorizing the construction of 50,000 new housing units or ensuring the availability of rent-controlled apartments. At the press conference, Netanyahu flattered himself in saying that he recognized the problem even before he became prime minister for the second time (2009), and blamed previous governments for mistakes and attempts to implement wrongheaded solutions. But the plan he presented turned out to be no more than spin meant to calm the waters. Netanyahu survived, and was elected two more times as prime minister.

More than five years have passed since then, and by all measures, the cost of housing has stubbornly continued to rise. In the past year alone, prices rose by 9%, according to the report published in late November by the public land appraiser summing up the third quarter of 2016.

Finance ministers have come and gone, but Netanyahu has remained the captain on whose watch the failure to address the housing crisis has persisted. This week, he cast the blame on the public, reproaching Israeli citizens for not listening to his calls several years ago to buy apartments in the south. “I said down south, 'Buy apartments — not just in Beersheba. Buy apartments in Dimona, in Yeruham. Buy apartments.' Some heeded the call and did so, and some did not,” said Netanyahu, as if he were an economic pundit and not the prime minister or finance minister almost continuously since 2003. As if it weren't his problem.

If anyone in Israel should be blamed for the housing crisis it is first and foremost Netanyahu. The prime minister, who once said of himself “When I want something, I get it,” has failed spectacularly on the issue most painful to young people in Israel. But just as great as his failure is his political skill, with which he’s escaped responsibility.

The man who has been at the front lines of the fight to solve the housing crisis for the past two years is Finance Minister Moshe Kahlon, who committed himself to lowering prices. Kahlon, one of the most brilliant politicians in Israel today, is devoting most of his efforts in the Finance Ministry to solving the housing crisis. Success on this issue would make him a senior and significant player in the next election. Failure could ruin his political career.

Contrary to Netanyahu, who only makes promises, Kahlon is committed to finding concrete solutions for the housing crisis, but like the prime minister, he also sins in making declarations to the media that erode his integrity. In a comprehensive interview with Ynet, he declared in July, “By the end of the year you’ll see real momentum here. There’s a bubble — people who invest everything today in this [housing], one day they’ll regret it.”

As opposed to the cellular communications reform Kahlon led as communications minister that brought about a significant drop in prices and made him a social welfare icon, housing reform is a much more complicated issue, and clearly much more difficult to predict. Any Israeli who wondered over the past decade whether to buy an apartment knows the dilemma. The ministers of finance and housing and of course the prime minister have tried to propagate the idea that it would be better to wait to acquire real estate because prices are about to drop. In the meantime, those who bought apartments have benefited from the continued rise in prices.

Housing prices didn’t stop rising even in 2014, when the previous finance minister, Yesh Atid Chairman Yair Lapid, put all his chips on a zero-VAT plan for young couples and recently discharged soldiers when buying a first home. Lapid was so convinced he had the magic formula that he missed no opportunity to ask young people not to buy an apartment and to wait for the program to be implemented. Many listened to him and waited. But the controversial law was delayed until it evaporated with the previous government. Those who waited too long to buy paid a heavy price.

Kahlon, as opposed to Lapid, came with a better reasoned plan, with greater ministerial and political experience and with a greater capacity to influence Netanyahu. He can’t argue that his demands (for larger responsibilities in order to reform the market) weren’t met. One of his flagship programs, the bill to tax a third apartment, which is supposed to fight the proliferation of apartments owned by the rich, is on the verge of passing in a second and third reading. Every week or month or so the finance minister announces the removal of further barriers, new construction, an increase in public housing options and lotteries for reduced-price apartments for young couples. But with all this action, the good intentions and the constant activity, the real estate bubble hasn’t stopped growing. Kahlon’s declarations that the housing crisis is about to end are not in line with what the public feels.

On Dec. 28, the numbers brought the minister of finance back to reality and continued to crack the public's faith in its leaders on this issue. According to data published by the Central Bureau for Statistics, in the last decade there was an increase of 7% in the number of Israelis who own two or more apartments, and between 1997 and 2015 there was a decrease in the number of people who own their homes from 70.2% to 67.6%. The greatest decrease in ownership rates was in the age range of 30-39.

Those who have the resources to do so have continued to buy investment properties, while young people are forced to rent from them. As 2017 is about to begin, it seems that the minister of finance should lower expectations, be less populistic with his declarations and tell the public the truth: that a solution to a crisis on this scale needs much more time.