Why Israel’s finance minister went behind Netanyahu's back 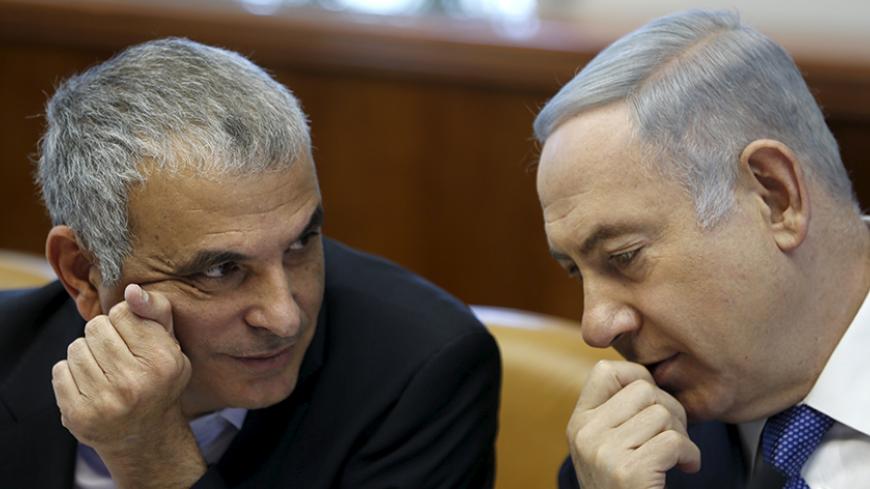 The Net Family Plan announced by Finance Minister Moshe Kahlon immediately after the Passover holiday on April 18 can easily be called “Net Revenge.” Without minimizing the significance of the tax credits and grants that would be distributed through the program to young middle-class families in Israel, it would be a mistake to see it only as a socioeconomic move. But “Net Family” is not only the finance minister’s revenge on the prime minister — who defeated him in the Public Broadcasting Corporation affair by means of a series of humiliations and arm twisting — it is also the opening shot of Kahlon’s election campaign.

Kahlon’s reform has four components: the addition of income tax credit points; lowering taxes on imported baby clothes, shoes and cellphones; lowering the price of afternoon daycare by means of government subsidies; and raising the income threshold below which families would be entitled to a work grant from the government. According to the calculations of the Ministry of Finance, a family of two working parents with two or three kids could improve its annual income by about 9,000-10,000 shekels ($2,500-$2,700). This plan is unique because it attempts to help the struggling secular middle class. The ultra-Orthodox would benefit less, because aside from lowering the import tax, the plan mainly helps families with two working parents, which is not the case for most ultra-Orthodox families (where often the man dedicates his time to Torah study).

In a normally functioning government, such a plan would be announced with the blessing of the prime minister and the rest of the ministers, but in Prime Minister Benjamin Netanyahu’s feuding coalition, the opposite happened: The finance minister hid a significant economic move from the prime minister and announced it at a press conference that was prepared with the secrecy of a military operation, in fear that Netanyahu would once again try to steal credit for the plan. The goal was to take revenge on him in front of the public and the media for the Public Broadcasting Corporation affair.

Kahlon-Netanyahu relations are currently the weak spot of the government, but at least in the short term they don't endanger its existence. This conflict could hurt Netanyahu after the next election — assuming that the criminal investigations don’t prevent him from running. Kahlon, the chairman of Kulanu, could recommend Yesh Atid Chairman Yair Lapid for prime minister (in an electoral system where, after the election, each party is requested to recommend the party fittest to lead the coalition). While the six seats that the latest polls predict for Kulanu are a significant decrease from the 10 seats it now holds, it is possible that they would tip the scales. Netanyahu knows it, and he has invested efforts in trying to placate Kahlon.

In many respects, the coalition crisis that broke out around the Israel Public Broadcasting Corporation (IPBC) signaled the start of the end of Netanyahu’s fourth government. Netanyahu wanted to dismantle it before it started broadcasting, while Kahlon defended the IPBC, which was destined to replace the bankrupt Israel Broadcasting Authority. Netanyahu even announced that he was willing to go for early elections on this issue. While it didn’t lead to the government’s dissolution, it left huge reserves of resentment on the part of the finance minister toward the prime minister. Kahlon left for the Passover recess battered and exhausted after he was forced to give in to Netanyahu’s demand to cancel the new Public Broadcasting Corporation’s news division, as a condition for the continuation of the government. The chairman of Kulanu expected until then that he would succeed in persuading the prime minister to allow the corporation to go on the air as planned, despite Netanyahu’s misgivings at the appointments made in the news division.

Kahlon didn't want to go to an election because of his situation in the polls and also because after two years in his office he hasn’t yet succeeded in fulfilling his election campaign promise to lower housing prices. This arm wrestling contest ended with Netanyahu’s victory, and it left the finance minister angry and agitated.

Over the Passover recess, Kahlon understood a few things. First, the next election campaign is already here. That is, from the moment that Netanyahu put out the possibility of an election, the political establishment started to operate with the dynamic of a campaign. While it is rather unlikely that an election would take place in the coming months, it can't be entirely ruled out. Second, the finance minister understood that time is pressing and that he has to show the public some accomplishments from his term at the Finance Ministry.

Kahlon’s public strategy until that point has not proven to be effective. At the start of his term, he figured that as with his reform to lower the prices of cellphone packages, which made him into a social justice icon, a significant decrease in housing prices would be a meaningful accomplishment that he could take to the next election. However, despite his efforts, the various real estate indexes have not pointed to a significant change in the trend, and Kahlon understood that for him to reclaim his brand as the social justice minister in the government he has to change direction — not only solving the housing crisis, but also giving “gifts” to the public, or in other words, an election economy.

As opposed to the Sisyphean effort in the real estate field, this was a move that immediately bore political fruits. Kahlon presented the public an accomplishment that could be measured in hundreds or thousands of shekels per family, and he conquered the television news and newspaper headlines. With regard to Netanyahu, Kahlon got back his self-confidence and his smile, as he stood by himself, for a change, on the podium at the press conference where he revealed the plan.

The importance of the element of surprise at the press conference was mostly for its impact on the morale of the finance minister and his staff. For a long time, Kahlon has had the feeling that Netanyahu pops up by his side at every positive public event, as happened on April 3 at the launch of the large housing project in the town of Beit Shemesh. Thus, during the holiday of Passover, he evaded the prime minister’s calls. When he learned that Netanyahu might attend the Mimouna celebration (popular celebration held the day after Passover) at the town of Or Akiva, which Kahlon visits every year, he decided to skip it. This is the extent of Kahlon’s disgust at Netanyahu these days.

Netanyahu, with political wisdom, accepted the act of revenge and was not tempted to speak out against the plan. His associates responded with restraint; one of them, speaking on condition of anonymity, called it “a positive step.” However, we can’t take this as the end of the crisis in the relationship between the two, which could have an impact on the identity of the next prime minister.