Prime Minister Benjamin Netanyahu’s settlement policies and President Donald Trump’s decisions on the nuclear deal and the American Embassy play into the hands of religious zealots in Iran and in the Gaza Strip. 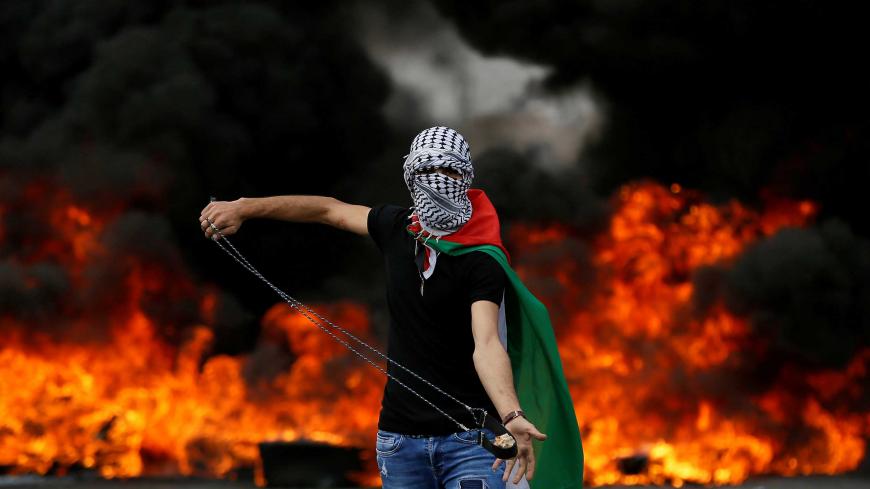 A Palestinian demonstrator holds a sling during a protest marking the 70th anniversary of the Nakba, near the Jewish settlement of Beit El, near Ramallah, West Bank, May 15, 2018. - REUTERS/Mohamad Torokman

There is great rage and anger in Ramallah over the May 14 relocation of the US Embassy from Tel Aviv to Jerusalem. The Palestinian leadership feels that this move infringes on their right to East Jerusalem. There are also sentiments of frustration, as Ramallah estimates that the Arab and Muslim world did little to block it. On the other hand, the violence on the Gaza border infuriates West Bank Palestinians.

A senior PLO official close to President Mahmoud Abbas told Al-Monitor that the Palestinian Authority (PA) leadership has decided on several routes of action in response to the embassy move.

The PA had already announced that it was cutting ties with the Donald Trump administration, and now they have decided to cut not only formal ties but also informal ones. It also decided to orchestrate peaceful protests in the West Bank and East Jerusalem and to prevent Hamas from taking the lead on a violent uprising. At the same time, the leadership in Ramallah wants to work with Jordan on strengthening the Palestinian and Jordanian hold on Al-Aqsa Mosque. It also intends to work with the highest levels at the EU, together with the Palestinian Arab partners, on moving all East Jerusalem Palestinian neighborhoods to the rule of the PA. The PLO official claimed that even the Trump administration may be open to this latter idea.

The PLO official spoke with great anger and claimed that both the United States and Israel do not understand that their policies — the move of the embassy to Jerusalem, the settlement and annexation policies, the killings in Gaza — have a great effect on the more religious and fundamentalist forces in Palestinian society and the Arab world.

The official also spoke to Al-Monitor about the Israeli-Iranian flare-up and Trump’s decision to withdraw from the nuclear deal, arguing that both strengthen the hand of the radical fundamentalist clerics in Tehran. According to the official, the US and Israeli policies are myopic. In the short run, they may provide some results, but in the long run, both countries will have to decide whether or not to negotiate with the relative moderates. The alternative would be fighting the radical fundamentalists in Iran along with fighting Hezbollah and Hamas.

The official warned that both the Jerusalem embassy move and the confrontation with the Islamic Republic of Iran may turn the Arab-Israeli conflict into a violent religious one. The real issue in his view is not the military capacity of the Arab and Muslim side — Israel is much more powerful anyway — but the radicalization of Arab societies and their attraction to a possible religious war. The senior official also warned of growing terror from Hamas and Hezbollah, which seems to be the only way to inflict Israel with some damage.

He believes that a realistic two-state solution process would slow down the threat of radicalization. However, after the withdrawal from the nuclear deal and the embassy move to Jerusalem, such a prospect seems virtually impossible.

A senior Israeli Ministry of Foreign Affairs official told Al-Monitor that the Israeli government under Prime Minister Benjamin Netanyahu is more vindicated than ever by the US president’s decisions. From the beginning of the P5+1 negotiations on a nuclear deal, Netanyahu warned that Iran would cheat the international community, and indeed they have. The issue is not only the nuclear threat, but also the ballistic missile capacity, the export of terror and the ambition to create a sphere of influence from Tehran to Beirut. This is now recognized even by the EU.

On the Palestinian issue, he claimed that Abbas is now completely sidelined and that Netanyahu would continue his policies on settlement expansion with US backing. He does not believe in a religious war, except for claiming that most of the Arabs tend to be anti-Semitics anyway.

As it appears, since 1967, the views of both sides have never clashed as much as they clash today, and a violent conflict with strong religious undertones cannot be ruled out.