The Islamic State claimed responsibility for the May 2 attack on Libya’s High National Election Commission headquarters in Tripoli, raising more security concerns for the upcoming elections. 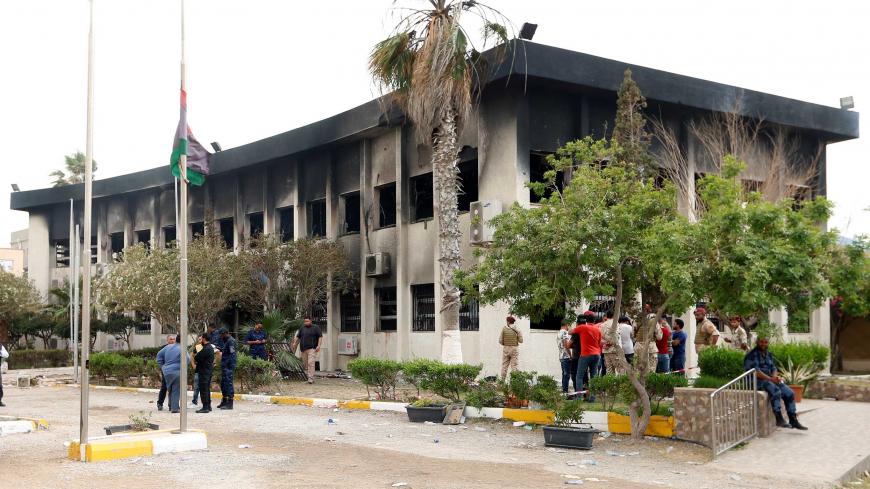 The High National Election Commission building after a suicide attack in Tripoli, Libya, May 2, 2018. - REUTERS/Ismail Zitouny

The May 2 attack on the High National Election Commission (HNEC) in the Libyan capital came at a critical time, as the country prepares for the presidential and parliamentary elections later this year. In the early hours of the morning, two suicide bombers armed with explosive belts entered the HNEC’s headquarters in Tripoli after killing two armed guards.

At least 14 were killed in the attack, including both police officers responsible for securing the site and HNEC employees, and as many as 50 others were injured. Security around the building in the rundown Ghout al-Shaal district west of central Tripoli is not unusually tight, as the building was accessible to the public after going through standard procedures of personal checks and scanning of any carried items.

The Islamic State (IS) claimed responsibility for the attack without providing any proof regarding the deadly assault. Sources on the ground claimed that in the confusion of the scene security forces accidentally fired on those escaping the building. Hasan, an HNEC employee who did not want to give his last name, told Al-Monitor, “The police killed most of the people as they were fleeing the building,” as a large police force arrived at the scene shortly after the attack occurred and started firing at those leaving the building — believing they were the attackers.

This account was also confirmed by another eyewitness who lives nearby the stricken site in a phone call to Al-Monitor while the attack was taking place. Omar, speaking on condition only his first name be used, said, “Many police officers arrived at the gate of the building after the attack started and opened fire at the people coming out of the building.”

The capital’s relatively small police force, operating under the Government of National Accord (GNA), lacks equipment and proper training. Most of its members are former militia members who fought against the Moammar Gadhafi regime in 2011 and have been integrated into government security forces with few checks or professional training to handle security situations such as terrorist attacks.

On May 3, the residents of Tripoli paid tribute during a collective funeral prayer in the city's main square before handing over the bodies to the victims’ families for burial.

Speaking alongside the GNA minister of interior in a news conference right after the attack, Emad al-Sayah, the chairman of the HNEC, wanted to reassure the citizens that the voter registration records had not been damaged. He blamed political division in the country for the attack, without elaborating further. Such reassurances are needed at this time as the HNEC is spending a great deal of time and resources encouraging people to register for the upcoming elections wherever they are held.

The damage to the building and its contents remains unknown, as no one is allowed on-site and the authorities have not given any further details.

Despite being defeated and forced out of its stronghold in Sirte, on the Libyan coast, in 2016, IS is still roaming the vast desert areas of the country, particularly areas south of Sirte and Bani Walid, southwest of Tripoli.

The attack in Tripoli might not be a surprise, given the country’s precarious security situation, including in the capital. Yet it has still shocked people across the country, since it was the most daring attack in Tripoli after the terrorist group killed eight people in its first major attack on the capital’s luxury Corinthia Hotel on Jan. 27, 2015.

The attack on the HNEC came only a few days after a large crowd paid tribute to Wissam ben Humaid, a well-known terrorist leader in Benghazi who died fighting against the Libyan Armed Forces in Benghazi two years ago. Yet it is only now that his family confirmed his death without providing any details on the circumstances. In a televised news conference in their refuge in Istanbul, Turkey, Humaid's father and brother announced his death April 30. Humaid was also a well-known member of IS, which battled the armed forces led by Gen. Khalifa Hifter in eastern Libya from 2014 to July 2017, when the armed forces took full control over the country’s second-largest city, thus defeating IS after three years of bloodshed.

Humaid’s funeral prayer taking place in the center of the capital a few days before the HNEC attack implies that IS still enjoys at least some support in the capital itself.

A mostly lawless situation has prevailed over Libya since its longtime leader Moammar Gadhafi was toppled in October 2011, when myriad militias and armed gangs controlled different parts of the country with little or no government control. Different terrorist groups still find safe spots mostly in the large desert areas, particularly in the south.

The attack on the HNEC raises legitimate questions on how safe the country is in the run-up to the general and presidential elections later this year. The idea of going to the polls in the divided country is strongly supported by UN Special Envoy Ghassan Salame as the best way to accomplish unity between the government in Tobruk, where the parliament is based, and the internationally recognized GNA located in Tripoli, which has little effective control over the capital.