Iranian Foreign Minister Mohammad Javad Zarif has posted an English-language video to YouTube laying out Iranian positions on the nuclear deal, including why Tehran will not be revisiting the agreement despite threats by US President Donald Trump to exit it if it is not reopened and other issues addressed. 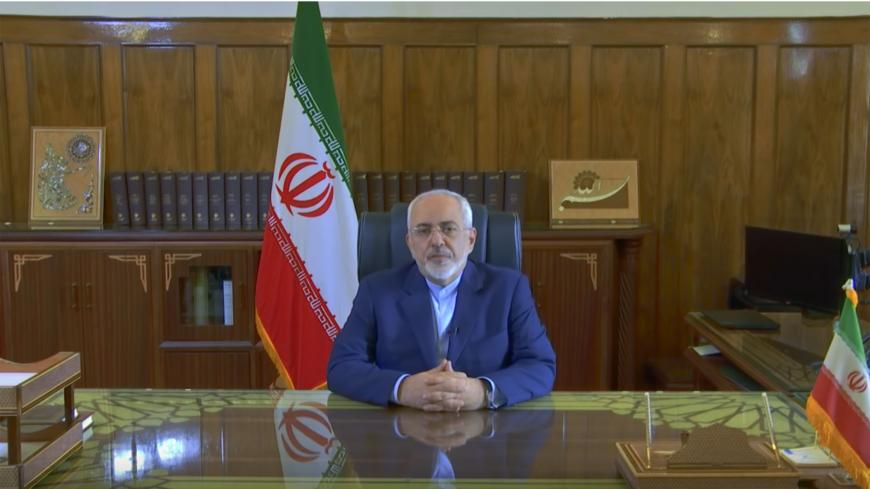 A still from a video released by Iranian Foreign Minister Mohammad Javad Zarif in which he outlines Iran's response to the possibility that the United States will leave the nuclear deal, uploaded May 3, 2018. - YouTube/ javadzarif

On May 3, Iranian Foreign Minister Mohammad Javad Zarif posted a five-minute video on YouTube outlining Iran’s position on the possibility of the United States exiting the nuclear deal, the Joint Comprehensive Plan of Action (JCPOA) signed with the five permanent members of the UN Security Council and Germany.

Speaking in English, Zarif says that as part of the deal, Iran had agreed to “take certain concrete steps to assuage the concerns of the United States primarily” in regard to its nuclear program. The United States in turn, he said, “committed to remove sanctions and cease impeding business with Iran.” Zarif added that although the JCPOA is not an international treaty, it is binding because the UN Security Council endorsed the agreement with its passage of Resolution 2231 (2015).

Zarif said the International Atomic Energy Agency, the UN's watchdog for the agreement, has consistently confirmed that Iran has “implemented all of its obligations,” a total of 11 times, since the conclusion of the deal in July 2015. “In contrast,” he said, “the US has consistently violated the agreement, especially by bullying others from doing business with Iran.” Tehran has long complained that the US Treasury has been intentionally vague with European companies in regard to sanctions in order to hinder investment in Iran.

Zarif rejected European proposals to revisit the deal to fold in other issues in an attempt to “appease” US President Donald Trump and prevent him from reneging on the agreement. Zarif said the negotiators for the deal had all agreed to exclude certain matters, such as Iran’s “missile capabilities and regional influence,” from the nuclear talks. Zarif dismissed the possibility of negotiations on these issues as a result of concerns in the West, and countered that Iran is the party with “serious grievances.”

Regarding a new deal including Iran’s missile program and regional influence, Zarif said, “Let me make it clear once and for all: We will neither outsource our security nor will we renegotiate or add on to a deal we have already implemented in good faith.” He emphasized, “Bluster or threats will not get a new deal, particularly as [the United States] is not honoring the deal it has already made.”

Zarif also addressed the April 30 speech delivered by Israeli Prime Minister Benjamin Netanyahu on Iran's nuclear program. He called the presentation “cartoonish” and said the accusations were a decade old and had already been addressed by Iran.

The foreign minister concluded his address with an indirect message to Trump, who prides himself on being a real estate mogul. Zarif remarked, “To put it in real estate terms: When you buy a house and move your family in or demolish it to build a skyscraper, you cannot come back two years later and try to renegotiate the price.”

It is widely believed that despite European efforts to persuade Trump otherwise, the United States will exit the nuclear deal May 12. It is unclear whether the US Treasury will immediately begin reapplying sanctions that were waived as part of the nuclear deal.

In fulfilling the JCPOA, Iran expanded its dealings with the IAEA, but according to Iranian Ambassador to the United Kingdom Hamid Baeidinejad, who also worked on the marathon nuclear negotiations, Iran could again change the manner of its cooperation with the agency.

“Iran is ready to return to the previous situation,” Baeidinejad said May 3 in a CNN interview. “It could be enriching uranium, redefining cooperation with the IAEA and other activities.” In terms of the broader consequence of what happens if the United States exits the deal, Baeidinejad said, “It would mean that no deal remains.”