Iran may use nuclear deal structure to try to isolate US

Foreign Minister Zarif has said Iran may file a complaint against Trump’s sanctions violations with the JCPOA’s Joint Commission. 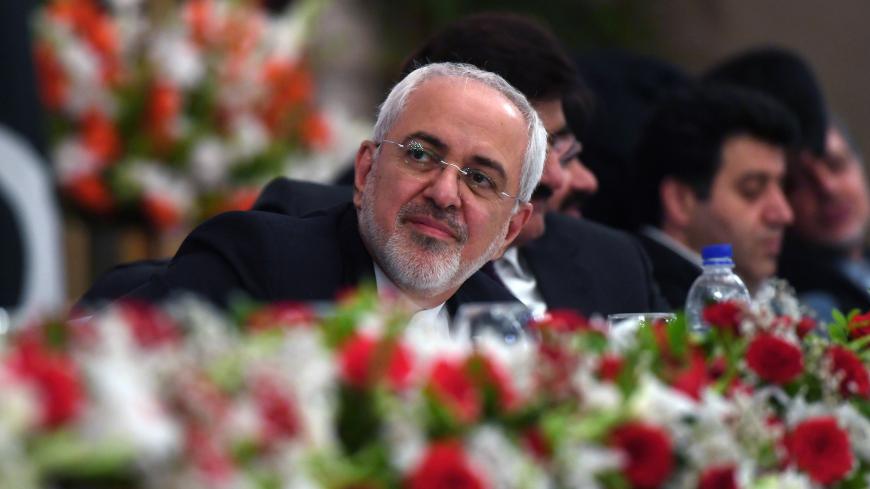 President Donald Trump could soon face the first public test of his nuclear deal gambit as Iran weighs a formal complaint against the United States for violating the agreement.

Foreign Minister Mohammad Javad Zarif indicated last month that Iran may seek redress before the Joint Comprehensive Plan of Action’s Joint Commission if the United States pulled out of the deal. The panel has no authority over US sanctions policy, but it could draw Iran and the remaining parties closer together — and isolate the United States.

“I expect them to do something within the structure of the Joint Commission,” Jarrett Blanc, who coordinated oversight of the deal for President Barack Obama’s State Department, told Al-Monitor. “Iran senses here both risk and opportunity. The opportunity is that for the first time in decades, the US doesn’t have the initiative. And Iran can try — it’s going to be difficult — but they can try to cement the wedge that the US has driven between ourselves and our closest allies.”

Zarif laid out the case for a JCPOA complaint in an interview last month with The New Yorker’s Robin Wright. Iran, he told her, could respond to a US withdrawal by resuming uranium enrichment or even pulling out of the Nuclear Non-Proliferation Treaty, or it could file a complaint with the JCPOA panel, its 12th since the deal went into effect.

“The objective of the process is to bring the United States into compliance,” Zarif said at the time. “If they want to kill the deal, they have that option, but they have to face the consequences. It’s dangerous to be arrogant, very dangerous.”

By going through the JCPOA, Blanc said, Zarif and his boss, President Hassan Rouhani, would be creating an opening domestically to try to cement the deal’s gains with its remaining parties. Zarif and Rouhani's strategy of engagement with the West is in deep trouble, with hard-liners burning a copy of the nuclear agreement on the floor of parliament this morning to chants of “Death to America.”

“If Rouhani and Zarif want to give this a try, then they need to buy some time,” Blanc said. “And I think one way would be to say, ‘Look, the deal has got a mechanism and we’re working through that mechanism.’ It gives them time to conduct a negotiation.”

“A lot of this does have to do with legitimacy and illegitimacy,” he added. “And so the sense that the US is the one that’s isolated here when normally it’s Iran that feels isolated, I think that potentially could be helpful [for Rouhani].”

Despite the internal pressure to pull out of the crippled deal, the Iranian president so far is standing by the agreement while engaging in emergency diplomacy with the remaining parties.

“I have ordered the Foreign Ministry to negotiate with the European countries, China and Russia in coming weeks," Rouhani said Monday. "If at the end of this short period we conclude that we can fully benefit from the JCPOA with the cooperation of all countries, the deal would remain."

The Europeans so far have been receptive to having that conversation with Tehran even as the United States pulls out.

“Our governments remain committed to ensuring the agreement is upheld, and will work with all the remaining parties to the deal to ensure this remains the case including through ensuring the continuing economic benefits to the Iranian people that are linked to the agreement,” the leaders of France, Germany and Britain said in a joint statement Tuesday. ”We urge the US to ensure that the structures of the JCPOA can remain intact, and to avoid taking action which obstructs its full implementation by all other parties to the deal.”

US negotiators, meanwhile, appear to have been caught flat-footed by Trump’s abrupt decision to pull out of the deal, four days before a self-imposed May 12 deadline. With Secretary of State Mike Pompeo in the air on his way to nuclear talks in North Korea, lower-level diplomats were left to frantically push back Tuesday against reporters skeptical that the administration had any idea what to do next after talks with the Europeans failed to reach an outcome that pleased Trump.

That has left an opening for Iran to try to draw concessions out of the Europeans through the JCPOA.

While the United States does very little business with Iran, the country is particularly vulnerable to America’s so-called secondary sanctions against third parties. By getting the remaining JCPOA parties to formally commit to the deal, Iran could help solidify an emerging resistance against US sanctions targeting countries that choose to uphold their end of the agreement.

“If the Europeans were going to push back against US secondary sanctions, they would need to take a mix of political and practical economic and finance steps,” Blanc said. “Does saying something in the Joint Commission, does that make it more meaningful to the private sector? No. They would still need to figure out those actual technical things they need to do. But it’s part of the mix. Politics is part of it.”

And when push comes to shove, he predicted Europe would side with Iran.

“I don’t think there’s any question that all of the parties of the JCPOA would side with them that the US is in violation,” he said, “when the US admits to being in violation.”