The Iranian authorities’ move to ban the popular smartphone messaging app Telegram has been accompanied by a campaign to get people to use domestically developed alternatives. 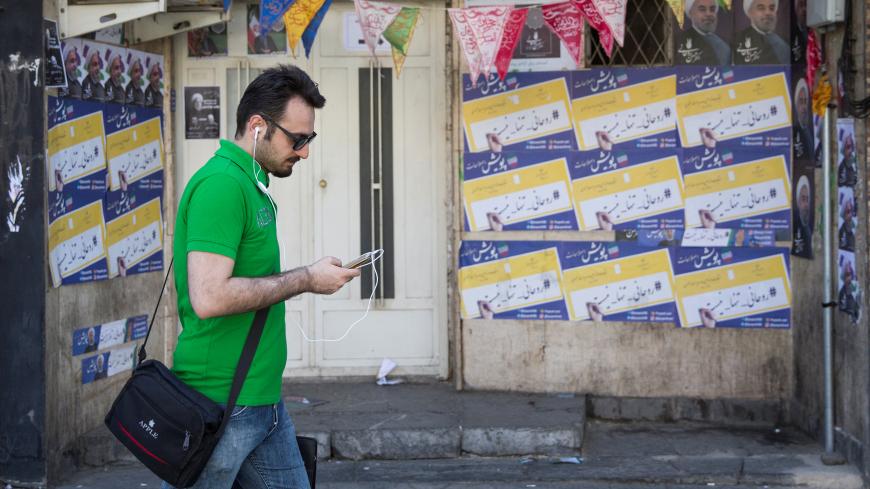 The running joke on Iranian social media right now is that three green ticks on a domestic messaging app mean that not only does the sender and receiver read the message, but an intelligence officer does too. Iranians heavily relied on Telegram as a form of censorship-free internet not only to chat, but to shop, share parody videos and read the news and official statements from Iranian officials. But ever since parliament member Alaeddin Boroujerdi, the head of parliament’s national security and foreign policy commission, declared on March 31 the decision to ban Telegram and replace it with domestically made apps, Iranians have been waiting for the blow.

The government enacted the ban the following month. “All internet providers in Iran must take steps to block Telegram’s website and app as of April 30,” according to a court order published on Mizan, the judiciary website. Mahsa Alimardani, who leads the digital rights project on Iran at ARTICLE 19, called the banning of Telegram a political move. “This directive came from a new entity within the judiciary, and it seems to be a way to order the Rouhani government against its position to not filter,” Alimardani told Al-Monitor. “That this comes from the hard-line judiciary instead of the multi-agency bodies that members of the Rouhani government are part of is not a surprise.”

At the beginning of April, pragmatist President Hassan Rouhani pushed back on the banning of Telegram during a meeting, saying, “The goal of creating and enhancing Iranian software and messaging apps should not be blocking access [to other apps], but [the goal] should be the elimination of monopolies.”

For over a year, the Iranian government has had a back-and-forth with Telegram’s founder, Pavel Durov, about moving the app’s servers inside Iran. When Durov declined, Iran’s Supreme Cyberspace Council threatened to block the app. It wasn’t until the Iran protests — the nationwide protests that shook the country in December and January — that echelons of the Iranian government shared concern about how the messaging app is being used. Images and footage that were circulated from the protests, and anti-Iranian government Telegram channels fomented violence, prompting the Iranian government to block Telegram and Instagram for several days. On Jan. 16, 170 parliamentarians wrote a letter to the heads of Iran’s three branches of government blaming social media for igniting the protests and demanding Telegram be replaced with domestically made apps.

Alimardani says that it’s merely a big inconvenience for Iranians and that they will resort to circumvention tools to use Telegram. Only weeks before the ban, there was a government push to move to domestic messaging apps. The Telegram channel of the Islamic Revolutionary Guard Corps' foreign operations arm, the Quds Force, offered five lucky Iranians gold coins when they sign up for Soroush — known for its chador-clad emojis holding signs that read "Death to America, Freemasons and Israel." On April 18, Supreme Leader Ayatollah Ali Khamenei's Telegram channel announced it would be ending activity and encouraged subscribers to follow channels on apps such as Gap, Soroush and iGap.

Alimardani said that the apps are local alternatives and are often developed by the Iranian government. “Soroush, for example, is a platform owned by the Islamic Republic of Iran Broadcasting, and quick security scans have also proven the lack of privacy and security guarantees on these platforms. There is no doubt these messengers are built with backdoors for the government to easily monitor content and communications,” he noted.

According to state media, over 5 million Iranians have already started using Soroush. One Iranian Twitter user posted a photo of sheep and said they were the Soroush users following the line of the Iranian government. Soroush app users had their own grumbles, though. Some complained on social media about never receiving a sign-up authentication code, and its slow upload speeds for photos and videos are likely to prevent Iranians from posting footage of potential protests.

Other Iranians were quick to poke fun at government surveillance. One Twitter user posted a photo of the Mona Lisa in a chador and wrote, “When the Mona Lisa puts a profile picture in a domestic app.” A parody video circulated of a couple chatting on Soroush and exchanging selfies, only for an intelligence officer to edit the chats and insert his own selfie in lieu of the girlfriend’s.

Soroush has a 3.8 rating on the Iranian app store, Cafe Bazaar. On the Google app store, Soroush has a similar rating, but in recent weeks many Iranians have given it a one-star rating and written comments about the government’s surveillance in English and Persian. One user, who gave the app a one-star rating, wrote in English, “Garbage. It's a governmental spyware, reporting all your chats and activities to authorities.” Another user who gave it a five-star rating wrote in English, “Even if it is spying, better than [the] West spy[ing],” referring to the US National Security Agency. “Would you prefer [the] devil spy [on] you, or Angel Iran? Honesty. Why [are] people licking [the] West’s anus?”

Alimardani says concerns about security aren't something that all Iranians care about, although telephone communications have been monitored for years. “I think there is a significant segment of the population that is distrustful of anything owned and controlled by the government, as it’s a well-known fact that if the government has access to data and information, it will monitor it.” Alimardani recommends that dissidents and journalists use a burner phone for domestic apps like Soroush not only to prevent their number and identifying information from being registered with the Iranian government, but so that no data or contact lists from the cellphone will be uploaded onto the platform. Alimardani claims that initial studies of the Soroush app have shown information like names and phone numbers can be easily extracted.

Meanwhile, Ahmad Alamolhoda, the Friday prayer leader of Mashhad who routinely voices the dangers of cyberspace, announced on his Telegram channel days before the official ban that he would continue to operate it simultaneously “because of the lack of interest of the audience to domestic messengers so far.” Once news of the ban caught on, Iranians on social media were quick to point out that the very government officials pushing for domestically made products were riding in Japanese and German cars, and that perhaps they should focus on setting an example first by riding in Iranian vehicles.

If anything, it seems that it will take more than some gold coins to incentivize Iranian Telegram users to make the move to domestic apps.