Will new US sanctions affect Iran’s support for Hamas?

While some believe new US sanctions will affect Iran’s economy and subsequently its financial support for Palestinian factions, others say this support is atop Iran’s priorities and won't stop. 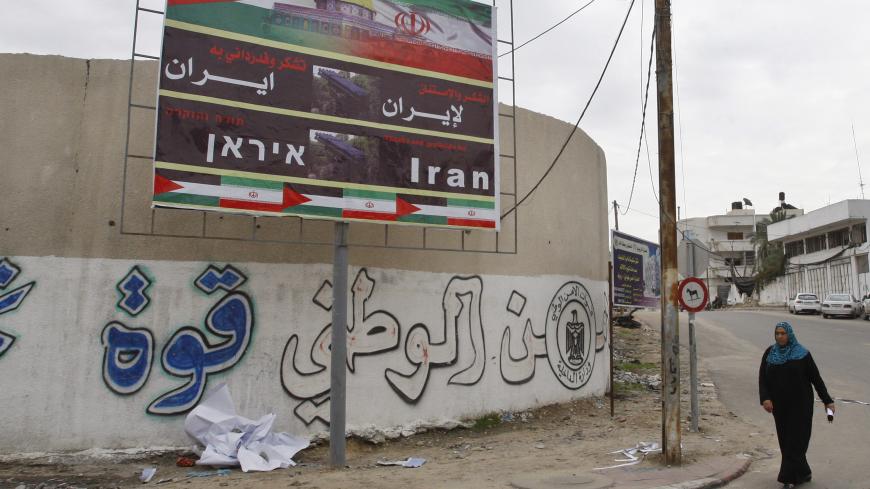 A Palestinian woman walks next to a banner that reads "Thanks and gratitude to Iran" in Gaza City, Nov. 27, 2012. - REUTERS/Ahmed Zakot

GAZA CITY, Gaza Strip — The US withdrawal from the Joint Comprehensive Plan of Action (JCPOA) on May 8 and the new sanctions imposed on Iran on May 10 have raised questions about their impact on Iran’s military and financial support for Palestinian factions, specifically Hamas and the Islamic Jihad.

Iran resumed support for Hamas and Islamic Jihad in May 2017. This support had been suspended at the end of 2015 as the two movements opted for impartiality in the conflicts in Syria and Yemen.

Reuters on Jan. 2 cited Lt. Gen. Gadi Eizenkot, chief of General Staff of the Israel Defense Forces, as saying in reference to the Iranian support, “In recent months, investment in the Palestinian arena has also been growing out of a desire to influence it — with an increase in the (annual) funding in the Gaza Strip for (militant groups) Hamas and the Islamic Jihad to $100 million.”

The Saudi Asharq al-Awsat newspaper reported May 25, 2016, that Iran gives the Islamic Jihad an annual sum of $70 million.

Hussein Sheikh al-Islam, an adviser to the Iranian foreign minister, told Al-Monitor that Iran’s decision to support the Palestinian resistance is strategic and cannot be revoked. He said, “Iran’s goal is to strengthen the resistance axis on the Palestinian territories, in Syria and Lebanon in the face of the US-Israeli axis.”

Islam said Iran’s relations with the Palestinian resistance factions, specifically Hamas and the Islamic Jihad, is developing with time.

Hamas’ representative in Tehran, Khaled al-Qaddumi, told Al-Monitor, “Iran is a strategic ally that has supported the Palestinian cause for years and has stood by the Palestinian people and the resistance as much as possible.”

He underlined that Hamas and the Palestinian resistance, as well as Iran and the entire Arab and Muslim world, are facing a common enemy — Israel.

Qaddumi said the policy of US President Donald Trump’s administration is taking an escalatory turn against the Middle East.

Islamic Jihad spokesman Daoud Chehab told Al-Monitor that Iran has long been subject to US sanctions, mainly because of its support for the Palestinian cause and its refusal to build ties with Israel.

He said, “Iranian officials stated that they are committed to backing the Palestinian cause and the Palestinian people’s struggle, and that this support will not depend on lifting or imposing sanctions on Iran.”

Chehab added, “Israel is fully invested in using Iran’s stances vis-a-vis the Palestinian cause as grounds to spar with the country. Israel does not want anyone to sympathize with the Palestinians who are the victims of its terrorism.”

Iranian member of parliament Mojtaba Rahmandoust told Al-Monitor that the new US sanctions will not affect Iran’s support for the Palestinian factions, saying the Iranian leadership will boost its support for the groups and for all movements facing Israel in the Arab region.

He added, “In the years preceding the signing of the JCPOA with the West in 2015, Iran faced a boycott and blockade from several countries. But its financial, military and political support for the resistance and the Palestinian people, as well as the other resistance movements in the region such as Hezbollah, remained unwavering.”

Rahmandoust condemned Trump’s attack on Iran; in a press conference, Trump announced the US withdrawal from the JCPOA and accused Iran of supporting Hamas and Hezbollah. The Iranian legislator said, “We support resistance movements seeking to regain their lands from Israel. The United States, on the contrary, supports Israel, which is occupying the Palestinian territories and threatening Arab and Muslim countries.”

US Middle East envoy Jason Greenblatt tweeted Feb. 4, “Imagine what the people of Gaza could do with the $100 million Iran gives Hamas annually that Hamas uses for weapons and tunnels to attack Israel!”

Akram Atallah, political analyst and journalist for Palestinian newspaper Al-Ayyam, told Al-Monitor that Iran’s support for the Palestinian factions will be affected by the new US sanctions. He said the extent of this impact, however, depends on whether other Western and European countries follow suit.

Atallah said tightening sanctions on Iran will harm the Iranian economy and will affect its support for its allies and resistance movements in the region. Consequently, the growth of the military capacities of these movements might slow down.

Political analyst Hadi Burhani, a professor of Palestinian Studies at the University of Tehran, told Al-Monitor, “The US sanctions might affect the Iranian economy, but at the same time Iran is ready to face them by coordinating with other European countries that are committed to the JCPOA.”

Burhani said that supporting the Palestinian resistance factions tops Iran’s priorities and that it is unlikely that this support will dwindle under the new US sanctions.

He said Iran is focusing on unifying the efforts of the movements facing Israel in the Arab region to confront the colonial threat of the United States and Israel causing the tragedies of the Arab people.

Iran will most likely keep supporting the Palestinian factions, even if the new US sanctions might have a slight impact. Meanwhile, military escalation between Iran and Israel in Syria on May 10 and Iran’s need for these movements to stand by its side in any future military confrontation guarantee its ongoing support further.

Hamas leader Osama Hamdan said in an interview on the Lebanese Al-Mayadeen channel in February that any aggression on any resistance front in Syria, Lebanon or the Gaza Strip is an aggression on all fronts, and that the Palestinian resistance will not be kept at bay.