Iran's aid to militant groups not going anywhere despite protests

Although groups funded by Iran throughout the region have refrained from expressing a stance on Iran’s protests, it's believed that Iran is unlikely to cut or halt such aid even as protesters demand ending the support. 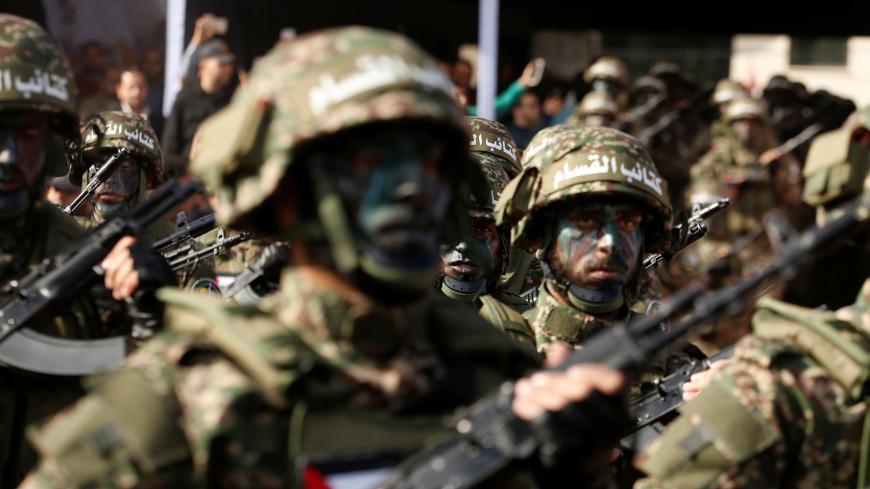 From the day protests began in Iran on Dec. 28, stemming from Iran’s worsening economic situation, Iranian protesters have denounced the money spent by their country in Palestine, Syria and Lebanon. They chanted the slogan, “No Gaza or Lebanon, My Life to Iran.”

Iranian-backed Palestinian factions kept mum and refrained from commenting on the protests out of fear that their stances would impinge on such aid and result in its halt or reduction.

Although there are no accurate figures of the aid that Iran has given to Palestinian factions, Al Jazeera indicated in July 2015 that Iran provided Hamas with an average of $250 million annually during the period of 2006-2011 in varying proportions, in addition to the military aid to the Izz ad-Din al-Qassam Brigades, Hamas' military wing. Al Jazeera, however, did not report on Iran’s aid to other Palestinian factions, such Palestinian Islamic Jihad and the Popular Front for the Liberation of Palestine (PFLP).

Iran’s aid to Hamas declined following Hamas’ position on the Syrian revolution in 2011 and worsened ties with Iran. Yet the aid provided to the al-Qassam Brigades remained unchanged.

Iranian Ambassador to Lebanon Mohammad Fathali said in February 2016 that Iran provides families of martyrs killed by Israeli soldiers with $7,000, and that each family whose house was destroyed by the Israeli army gets $30,000.

Al-Monitor contacted a number of representatives of the Iranian-backed Palestinian factions, such as Hamas, the Islamic Jihad, the PFLP, and the PFLP - General Command, for their opinions on the protests. They all refused to comment, considering it an internal Iranian affair in which they were not willing to meddle.

Hussam al-Dajani, a professor of political science at Al-Ummah University in Gaza, told Al-Monitor, “The Palestinian factions’ silence on the protests in Iran is in line with their orientation that involves refraining from interfering in other countries’ internal affairs. Yet if the protests escalate, Iran may ask them to express clear stances in its favor in the face of protesters. This is because Iran’s aid for the factions is designed to build itself a regional empire and elevate its influence in the region. The sums spent on the factions are small compared to the influence it has over them. I believe that [Iran] will not reconsider its aid for the factions, despite the potential small cuts. Such aid will not be totally halted.”

Commenting on the demands that foreign aid be halted, Hossein Amir-Abdollahian, an adviser to the speaker of Iran’s Islamic Consultative Assembly for International Affairs, defended the foreign aid and said Jan. 7 that those who made these demands do not have a correct understanding of national security.

Hezbollah Secretary-General Hassan Nasrallah stated Jan. 3 that most Iranians are in favor of the foreign aid, which was also a topic of dissent during the 2009 Iranian protests. According to Nasrallah, the Iranian people are convinced of its importance, and they have the willingness to provide the resistance movements with financial aid, although there is an Iranian minority seeking to bring it to an end.

After Mahmoud Ahmadinejad's victory over opposition candidate Mir Hossein Mousavi in Iran’s 2009 presidential election, Iran had witnessed popular protests that lasted for months during which protesters chanted the slogan “No Gaza or Lebanon, My Life to Iran,” demanding that Iran’s foreign aid to Hezbollah and Hamas be reduced.

Speaking to Al-Monitor on condition of anonymity, a member of Iran’s Islamic Consultative Assembly, said, “Bringing to a halt Iran's aid to Palestinians and bringing it back to [Iran] will not resolve the country’s economic crises, although it is only natural that protesters connect their internal crises to the state’s spending abroad. This connection is endorsed by Arab and American circles to show that Iran’s foreign aid comes at the expense of the situation at home. This is although in order to preserve its national security, Iran is required to find foreign allies and that such allies would benefit from its financial and military aid. Such protests will not prevent Iran from continuing to pursue its current policy in Palestine, Lebanon, Syria, Yemen and Iraq.”

In parallel to the protests, Gadi Eizenkot, the Israeli army’s chief of general staff, indicated Jan. 2 that Iran spends hundreds of millions of dollars annually on its allies. He said that such spending has recently been focused on the Palestinian arena and reached $100 million annually to Hamas and the Islamic Jihad.

Military expert Amos Harel reported in Haaretz on Jan. 8 that the Iranian threat to Israel involves Lebanon, Syria and Gaza, where the Islamic Jihad and Hamas obtain economic aid.

Hassan Abdo, a political analyst close to the Islamic Jihad in Gaza, told Al-Monitor, “The Palestinian factions’ silence on Iran’s protests stems from their desire not to interfere in regional problems, to spare the Palestinian cause political complications. These protests may have an impact on Iranian foreign policy, and increase the country’s focus on internal issues. Yet it is out of the question that Iran abandons the regional gains achieved in the past years, especially in the Palestinian dossier.”

Iranian journalist Mohammed al-Ahwazi told Al-Monitor, “The protests showed that Iranians are divided over the country’s foreign aid, particularly the aid provided to the Palestinian factions and Hezbollah. President Hassan Rouhani perceives that Iran could possibly benefit from the 2015 nuclear deal’s advantages by making concessions to the world in terms of its relations with Gaza and Hezbollah. The Islamic Revolutionary Guard Corps [IRGC], however, with the support of Iran’s Supreme Leader Ali Khamenei, view that Iranian-Hamas relations should be similar to Iranian-Hezbollah relations, in order to further Iranian interests. They also view that keeping the regime in place is linked to its regional strength, and to the financial and military aid it provides to its allies.”

He pointed out that “Iran’s spending on the Palestinian factions is a part of its defense budget and has resulted in the Iranians’ hostile stance toward what they consider to be a waste of their money and exhaustion of their wealth. In my eyes, such spending will not be reduced.”

In the Iranian Embassy in Damascus on Jan. 4, some Palestinian factions’ leaders met with a high-level Iranian delegation led by Iranian charge d'affaires in Damascus Abdol-Reza Ghassemian and head of the Iranian Islamic Consultative Assembly Ahmad Salek to discuss Iran’s aid to the Palestinian people in the face of the Israeli occupation.

Saleh al-Arouri, the deputy head of Hamas' political bureau, stated Dec. 30 that Iran is providing the resistance with intrinsic and genuine aid in order for the resistance to survive, adding that such aid will not be halted.

Islamic Jihad's leader Khader Habib said Nov. 16 that Iran is a supporter at the moral, political and material levels, and he called on Arab and Islamic countries to follow in its footsteps.

For his part, Ankara-based researcher on Iranian policies Ali Baker told Al-Monitor, “The protests showed that Iranians oppose [the policy] of spending billions of dollars on the regime’s foreign wings while they live under bad circumstances. Nevertheless, Iran will not reconsider such aid, given that the current protests do not represent an existential threat, and thus Tehran believes that there is no need for it to make concessions. Furthermore, Iran views its expansion abroad as a tool to protect itself and that any fallback at home could encourage its enemies to bring the battle to its territory. Also, its foreign spending has not resulted from the government decision, but rather the IRGC and supreme leader.”

The Palestinian factions’ ongoing silence on the Iranian protests may highlight the fact that they have concerns over the continuation of the protests and their fear that these protests will result in reduced Iranian funding. These concerns come at a time of mounting regional pressure and decreasing allies in the region.