Has Gaza joined the axis of resistance?

Palestinian factions, with the exception of Fatah, are threatening to open a Gaza front against Israel if it goes to war in Syria, Lebanon or Iran. 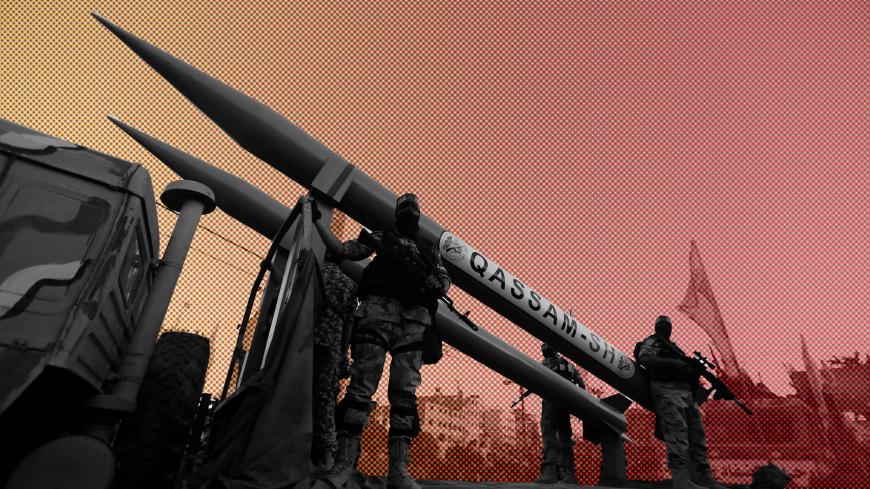 Tensions escalated Feb. 10 between Israel and Syria after Syrian air defenses shot down an Israeli warplane that had bombed Damascus hours after Israel intercepted an Iranian drone in its airspace. Although Palestinians were not involved in the events, a few hours after them, Hamas, Islamic Jihad, the Popular Front for the Liberation of Palestine (PFLP), the Democratic Front for the Liberation of Palestine, the Popular Resistance Movement and the Palestinian Freedom Movement declared their support for Syria and Iran and vowed not to remain silent if Israel were to attack either country.

On the same day, the Izz ad-Din al-Qassam Brigades, Hamas’ armed wing, tweeted that it will be on the lookout to protect the Palestinian people and respond to any Israeli aggression, given the incidents on the Israeli-Syrian border. Mahmoud Mardawi, a Hamas leader in Gaza and former military commander of the brigades, told Al-Monitor, “Hamas' position on the events in Syria has loud and clear messages to Israel. Most prominently is that the Gaza front will not be easier than the Syrian and Lebanese fronts, nor will Israel be able to separate the Gaza, Syrian and Lebanese fronts. Hamas also seeks to raise the morale of the Palestinian people and eliminate any fear of a new war on Gaza by reassuring the people that the Qassam Brigades are capable of responding to the Israeli threats.”

Mardawi added, “The movement also wants to show Syria that should Israel attack, Hamas will stand by its side so it will not have to face the enemy alone, as it did before. This will make it harder for Israel to wage war on any front, be it on Gaza, Lebanon or Syria.”

Maher al-Taher, political relations director of the PFLP, based in Damascus, told Al-Mayadeen on Feb. 10 that any Israeli war against either Lebanon, Syria or Gaza is bound to turn into a broader conflict on all these fronts.

Hassan Hoballah, currently overseeing the Palestinian dossier for Hezbollah, told Al-Monitor, “The axis of resistance will not allow Israel to wage an aggression against Gaza alone, and the field commanders have their own military means to stop this from happening.”

Hoballah further stated, however, “I rule out the possibility of an Israeli aggression against Syria, Lebanon or Gaza. It will really have to pay if it were to wage a war, particularly in light of the resistance’s resources, Gaza included, and because all parties in the resistance axis are now in the same boat.”

The recent events in Syria may have paved the way for Hamas to return once and for all to the Iranian axis it left in 2012 following disagreement over which side to back in the Syrian revolution. With relations gradually falling back into place between Hamas and Hezbollah and Iran, the movement’s show of support for Syria may put an end to its estrangement and help it rebuild normal relations with all the members of the axis of resistance, that is, Tehran, Damascus and Beirut.

While most Palestinian factions took pro-Syrian and pro-Iranian positions, Fatah has noticeably remained silent. It has not commented or issued a statement on the above developments. Tayseer Nasrallah, a member of Fatah’s Revolutionary Council and Fatah leader in the northern West Bank, explained to Al-Monitor why that is. “Fatah is focusing its attention on the Palestinian cause,” Nasrallah said. “We do not interfere in the affairs of neighboring countries. We believe that any war in the region will be at the expense of our national cause. We do not want to divert the Palestinian attention toward other issues.”

Palestinians in Gaza have not yet recovered from the repercussions of Hamas' 2014 war with Israel. This is one reason why they are likely to be unenthusiastic about engaging in a regional war with which they have nothing to do. This is especially the case since Fatah has no desire to engage in a conflict and given that neither Syria nor Hezbollah nor Iran intervened on their behalf during the Israeli wars in 2008, 2012 and 2014.

Wasef Erekat, a Palestinian military expert in the West Bank and former artillery unit commander for the PLO, told Al-Monitor, “Engaging in a regional war is not in Gaza’s best interest. Palestinians in southern Lebanon and the Syrian Golan might join in a war against Israel, but Gazans already have it hard enough, and their situation only allows them to stay on the sidelines. Perhaps Gaza’s allies in Lebanon and Iran can understand this situation and excuse it.”

On Feb. 10, Iranian Assistant Foreign Minister Hussein al-Islam said that Iran will pursue a strategy of maintaining a united resistance front involving Syria, Lebanon and Gaza. The Palestinian factions' pro-Syrian and pro-Iranian positions beg the question of whether they are simply for show or whether they can be implemented on the ground against Israel.

Emad Abu Awad, an expert on Israeli affairs at the Istanbul-based Vision Center for Political Development in Turkey, told Al-Monitor, “Israel waging war on all fronts [figuratively speaking] aims at inciting the US against Iran based on accusing [Tehran] of sponsoring resistance in Gaza. Although Israel might fear unexpected developments during war [from different fronts], its northern front with Lebanon and Syria remains its focal point.”

Tensions could further escalate between Israel and Syria, posing a serious challenge to the parties of the Iranian axis. They could either join forces to stand united in confronting Israel, possibly resulting in a regional war, the repercussions of which the Palestinians might not be able to bear. Alternatively for the Palestinian factions, they could simply stick to issuing statements and taking stances.