Will Hezbollah join Palestinian factions in confrontation with Israel?

Amid calls to unify fronts between Palestinian resistance factions in Gaza and Hezbollah in Lebanon, experts envision many difficulties in this possibility of coordination. 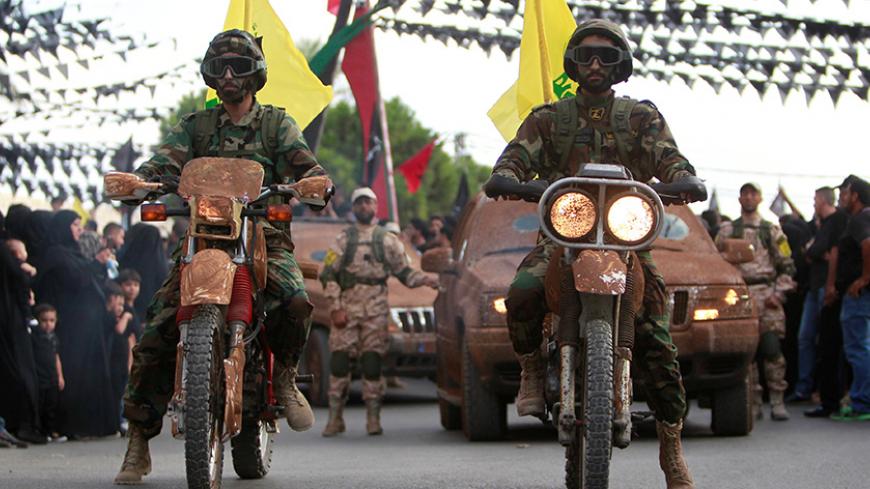 Hezbollah members on motorbikes and vehicles parade during a procession ahead of the day of Ashura, in Saksakieh, southern Lebanon, Oct. 9, 2016. - REUTERS/Ali Hashisho

GAZA CITY, Gaza Strip — On Feb. 21, Ramadan Abdullah Shalah, secretary-general of the Palestinian Islamic Jihad movement, gave a speech at the Sixth International Conference in Support of the Palestinian Intifada in Tehran, during which he called for the need to unify fronts between Palestinian factions in Gaza and Hezbollah in Lebanon, in anticipation of Israel waging a war against either one.

This was not the first time a Palestinian figure made such a call. On Jan. 22, 2015, a similar call came from Mohammed al-Deif, the commander of Hamas’ military wing, Izz ad-Din al-Qassam Brigades. Deif wrote a letter to Hassan Nasrallah, the secretary-general of Hezbollah, to express condolences following the death of Hezbollah members killed in the Syrian town of Quneitra by an Israeli raid on Jan. 18, 2015. In the letter, Deif called on the need to unify efforts within the Arab and Islamic nation to fight a single battle against Israel.

Shalah’s suggestion, to which Hezbollah has yet to publicly respond, raises questions in the Palestinian street about the timing and goals of this call. The Palestinian Authority opposed this call, which was backed by Hamas and other Palestinian factions. For their part, Israeli media outlets, such as Channel 20, expressed concerns about Shalah’s call.

In an interview with Defense News on Feb. 26, Brig. Gen. Yoel Strik, who previously served as the Home Front commander in the Israeli army and who will assume the Northern Command position in the coming weeks, warned about the thousands of rockets that would fall upon Israel in a single day, should a war erupt with Hezbollah or Palestinian factions in the Gaza Strip. Strik also expects such a war to last for weeks, during which hundreds of thousands of Israelis would have to be evacuated from their homes.

Islamic Jihad leader Khader Habib told Al-Monitor that Shalah’s call came in response to repeated threats made by Israel to wage a new war on the Gaza Strip or Lebanon’s south, noting that the unity of Palestinian factions is a crucial factor in confronting the all-powerful Israel.

He added, “We hope the party, which Shalah addressed [Hezbollah], pays heed to this call,” noting that there is coordination between Palestinian factions in Gaza and Hezbollah, which provides the Palestinian resistance factions with (military) assistance, information and training.

When asked about the possibility of the Islamic Jihad fighting a battle against Israel alongside Hezbollah, Habib said that it was too early to talk about this, but his movement and other Palestinian factions are carefully considering this probability.

Speaking to Al-Monitor, spokesman for the Popular Resistance Committees Abu Mujahid confirmed that resistance factions in Gaza have been coordinating with Hezbollah, and their joint efforts will reap benefits in any battle Israel could possibly wage.

Abu Mujahid further explained that it would bode well for Palestinian resistance factions to open several military fronts against Israel, noting that the factions in Gaza are carrying out the required military preparations in coordination with Hezbollah, which has been secretly smuggling weapons into Gaza for years, to protect the Palestinian people.

Political and military experts concur that the tension prevailing over Hezbollah’s relationship with Hamas and the Islamic Jihad could impede such a military agreement to unify fronts. Hamas and the Islamic Jihad refuse to take sides in the conflict in Syria and do not agree with Hezbollah, which is fighting alongside Syrian President Bashar al-Assad’s forces inside Syria.

Retired military expert Maj. Gen. Wasef Erekat believes that Shalah’s call can only be answered if the leaderships of the parties in Gaza and southern Lebanon agree upon a unified political position. He further pointed out that the resistance’s resources in Gaza are limited and only enough for self-defense purposes, unlike Hezbollah’s, which is backed financially and militarily by Iran.

Erekat told Al-Monitor that Hezbollah in Lebanon and Palestinian factions in Gaza cannot defeat Israel and expel it from the region once and for all; they only have enough resources to deter Israel, especially since the latter receives military, financial and political support from Western countries, namely the United States.

Al-Monitor tried to contact several sources close to Hezbollah, but they refused to comment on the topic.

Military expert Yousef Sharqawi shares Erekat’s views on the need to have a unified political stance between Palestinian factions themselves and with Hezbollah before unifying fronts. He stressed that unifying fronts against Israel is very important for both the Palestinian and Lebanese people in proving their superiority in any future confrontation with Israel.

Sharqawi explained that the most important element in that equation is Hamas, because it represents the largest resistance faction in Gaza and stands with the Qatari camp, which opposes Iran and Hezbollah, noting that should Hamas maintain this position, all calls to unify fronts will remain wishful thinking.

However, Sharqawi does not rule out the possibility of Shalah attempting to flatter Iran and Hezbollah through his call in order to receive more military and financial support.

He also warned about Israel exaggerating the Palestinian resistance’s resources, which could demonstrate an Israeli intention to enter into a new military confrontation in the near future.

One could only wait for a military confrontation to present itself in order to find out whether the call to unify fronts could be applied.