Iran has been supporting and instructing Palestinian resistance factions for years on the down low, but now it's bragging about it. 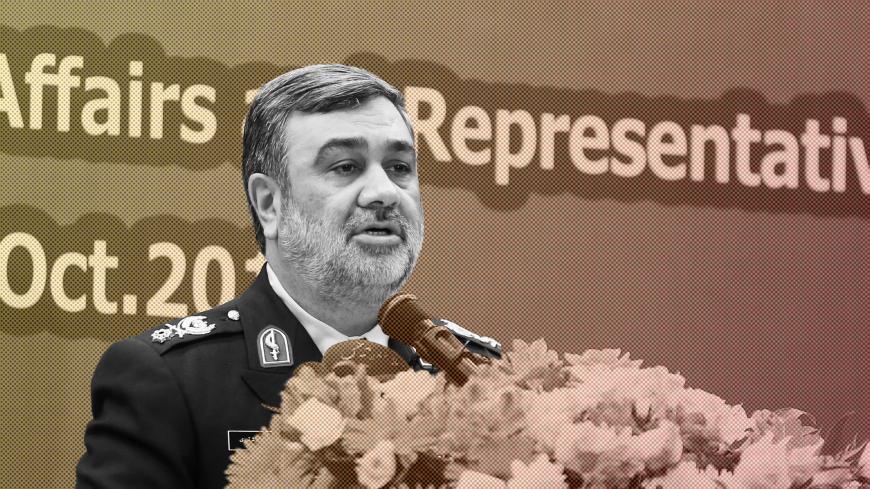 In an interview with Globo TV during his Jan. 1 visit to Brazil, Netanyahu said, “Half of them [Palestinians] are already under the gun of Iran and of radical Islam.” His comments coincided with statements made the same day by Iran's police chief, Hossein Ashtari, that his forces are ready to train members of the Palestinian factions' armed wings.

Iran's Islamic Revolutionary Guard Corps (IRGC) has been unofficially providing this training since 2005, but this was the first time the police force made such an offer publicly. Ashtari made the statement during a meeting with Palestinian Islamic Jihad (PIJ) Secretary-General Ziyad al-Nakhalah in Tehran. Nakhalah was accompanied on his trip by all the members of the PIJ political bureau. The delegation met senior leaders of the Iranian regime, most notably Supreme Leader Ayatollah Ali Khamenei.

"[Khamenei] always supports the resistance against the Zionist entity," Ashtari said during his meeting with Nakhalah. "We follow his footsteps and continue to support the oppressed Palestinian people. … We are ready to provide any possible assistance.”

The relationship of the Hamas and PIJ factions with Tehran had been strained when the two movements stood idly by during the conflicts in Syria and Yemen. Hamas withdrew from Syria in 2012, and announced its support for the Saudi-backed government in Yemen in 2015. Iran, a bitter rival of Saudi Arabia, restricted its financial and military support, including IRGC training, to the factions.

Following the election of a new Hamas leadership in May 2017, and new PIJ leadership in September 2017, the relationship with Iran started improving. The factions intensified their visits to Tehran and repeatedly expressed appreciation for any support Iran offered.

Hussein Sheikh al-Islam, adviser to Iranian Foreign Minister Mohammad Javad Zarif, affirmed Iran will not hesitate to provide any financial or military support requested by the Palestinian factions. He told Al-Monitor that Ashtari’s offer proves Iran is putting all of its capabilities at the factions' disposal to help them upgrade their military competence.

“Iran's relationship with the Palestinian factions specifically Hamas and [the PIJ] is strong and developing over time,” Islam said. “Iran sees the Palestinian resistance movements as part of the resistance front in the Arab region, which stands united against Israel and the United States.”

Khoder Habib, a PIJ leader, told Al-Monitor that Iran is a key supporter of his movement and other Palestinian resistance factions. He said the PIJ delegation's recent visit to Tehran yielded positive results.

“Ashtari’s offer attests to the solid relationship between the Palestinian resistance forces and Tehran,” Habib said.

The offer came in tandem with Israeli reports that Khamenei has proposed that the PIJ form a joint operations room in the Gaza Strip with Lebanon's Hezbollah and some Iraqi militias. Israel believes this would provide a second military front against Israel if it wages a war on Gaza.

US Middle East envoy Jason Greenblatt and Israeli Chief of Staff Lt. Gen. Gadi Eizenkot had revealed early in 2018 that Iran was providing hundreds of millions of dollars a year to Palestinian armed factions in the Gaza Strip.

Further consolidation of relations between Iran and the Palestinian factions is possible, as Hamas and the PIJ recognize that Iran is their main supplier of arms and money. If that happens, it is likely these factions would enter a military battle in a unified front with Iran, Hezbollah and Syria against Israel. Former Israeli Defense Minister Avigdor Liberman had warned of that possibility in October 2017.

Israel's withdrawal from Gaza in 2005 and the Hamas takeover there in 2007 allowed Palestinian fighters to train at camps in Iran, Syria and Lebanon, until Egypt tightened its grip on the Gaza border in 2013.

Military expert Youssef al-Sharqawi, who retired as a general from the Palestinian Authority security forces in 2006, noted that Israel's ongoing siege on Gaza, Egypt's restrictions on the Rafah border crossing and Cairo's determination to destroy the factions' tunnels into Egypt have made it more difficult for fighters to travel to Iran to receive training.

But he told Al-Monitor he expects the factions' leadership and Iran to constantly search for alternatives to overcome such obstacles. He attributes the improvement of the Gaza factions' military skills largely to Iran, but also to several other unspecified countries and parties.

It seems that Iran’s public offer of training aims to send messages to Israel, which continues to target Iranian and Syrian forces and their allies in Syria.

The IRGC's Quds Force unit commander, Maj. Gen. Qasem Soleimani, had used that method to send a message to the United States. In December 2017, he offered comprehensive military support to the Palestinian factions after US President Donald Trump recognized Jerusalem as the capital of Israel.