There is some speculation in Iranian media that populist cleric Muqtada al-Sadr’s election victory is tantamount to a greater Saudi role in Iraq. 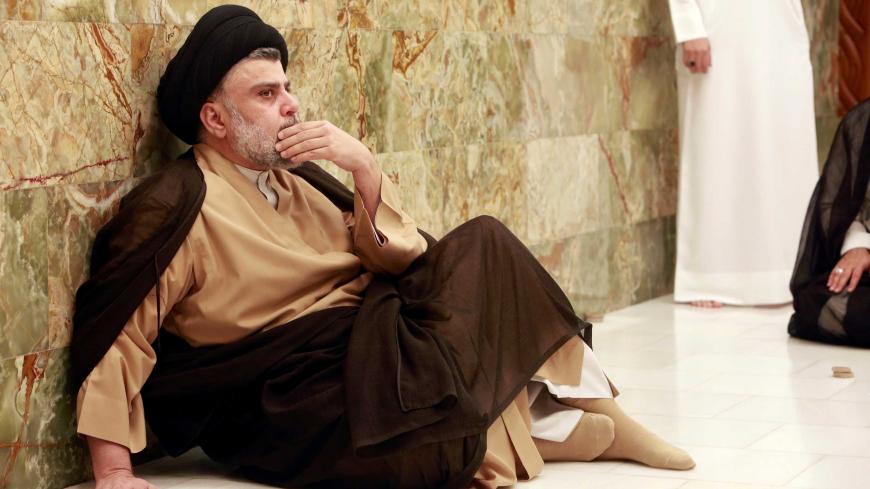 The Sairoon (On the Move) Alliance of Shiite cleric Muqtada al-Sadr is set to win Iraq's parliamentary elections — an unexpected outcome that has caught the attention of Iranian media.

Over 91% of votes in 16 of Iraq's 18 provinces have been counted so far, and based on the announced results, Iran-backed Shiite politician Hadi al-Ameri's Fatah (Conquest) Coalition is in second place, while current Prime Minister Haider al-Abadi's Nasr (Victory) Coalition came in third.

The Reformist Shargh newspaper wrote that the surprising results of the Iraqi elections may signal a greater Saudi influence in Baghdad.

“The recent proximity of Muqtada al-Sadr to Saudi Arabia has led the Sairoon Alliance to be partly considered as a group backed by the Saudis and … to some extent means greater influence of Saudi Arabia [in Iraq] compared to its regional rivals,” wrote Shargh on May 15, adding, “Sadr's supporters are opposed to Iranian influence and are vehemently anti-American.”

Describing Abadi as a figure who has the support of both Iran and the United States, Shargh wrote, “Even though Abadi achieved significant domestic and international success through the victory over Daesh [Islamic State], he failed to overcome economic problems, and this caused him not to achieve the results he expected in this election.”

Explaining the factors behind Sadr’s victory, the Reformist daily noted, “Muqtada al-Sadr, who has lately shifted his policies and turned to Riyadh, took advantage of combating corruption in his competition with his rivals and also maintained his own traditional supporters. … Now he can form the biggest Shiite electoral coalition and play a key and strategic role in electing the [next] prime minister.”

Moreover, Qasem Mohebali, former director-general of political affairs of the Middle East in Iran's Foreign Ministry, told the moderate Entekhab news site on May 15, “Perhaps the reason for [Sairoon] Alliance’s attraction for the Iraqi people was Muqtada al-Sadr's nationalist slogans like ‘Arab Iraq.’ On the other hand, the corruption of the previous governments was also impactful in turning people away [from the other groups].”

“Given the unexpected results that Nasr achieved, the chance of Abadi becoming the [next] prime minister has decreased, especially since the [coalition] under his leadership came in fifth in Baghdad,” argued Tasnim.

According to Tasnim, if Fatah comes to terms with Nasr and former Prime Minister Nouri al-Maliki’s State of Law coalition, an inclusive coalition can be formed to choose the prime minister. However, based on Tasnim’s report, collaboration between Abadi and Maliki is unlikely due to their deep disagreements.

Meanwhile, Iran’s former ambassador to Iraq has denied the speculations about Sadr approaching Saudi Arabia. Asked about the US government’s possible softened position toward Sadr and his alleged proximity to Riyadh, Hassan Danaiefar told Entekhab news site on May 15, “Some of this talk is speculation. … One or two trips [to Saudi Arabia] cannot change the basic principles of a person or a [political] current.”