Fatah is ending its involvement in the Great Return March, accusing rival Palestinian faction Hamas of changing and diluting the event's focus. 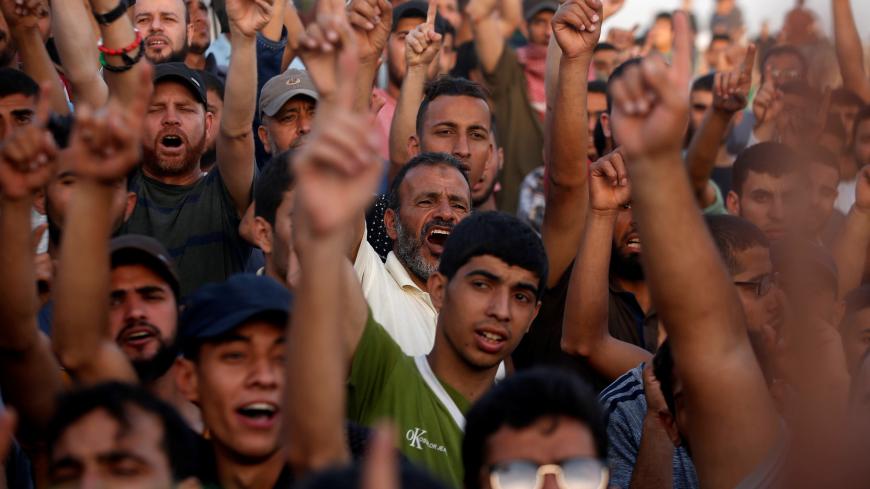 Palestinian demonstrators chant slogans during a protest demanding the right to return to their homeland, at the Israel-Gaza border, east of Gaza City, May 18, 2018. - REUTERS/Mohammed Salem

GAZA CITY, Gaza Strip — Fatah unexpectedly announced last week it was ending its participation in the Great Return March early, calling the actions of its rival faction Hamas during the protests "degenerate." Meanwhile, other Palestinian factions participating under the name of the Coordination Committee of the Great Return March announced the protests will continue until June 5, marking the anniversary of Israel’s occupation of Jerusalem in 1967.

In its May 16 statement, Fatah demanded the various Palestinian factions, including Hamas, form a committee to assess the march and address mistakes that occurred. Fatah gave no specific examples of such mistakes. The next step, it stressed, will be for the Palestinian National and Islamic Forces committee to examine plans for future activities.

The Great Return March began March 30, with Palestinian people and factions in the Gaza Strip participating en masse to draw the world's attention to the right of Palestinian refugees to return to the lands they were forced to leave in 1948. Hamas also is demonstrating with the aim of ending the decadelong blockade on the coastal territory — a goal Fatah said should be separate from the march.

“Fatah ended its participation in the protests because many other Palestinian factions, especially Hamas, began to use the protests for purposes other than those set in the beginning. Hamas is seeking to take advantage of the march to try to break the siege on Gaza, instead of focusing on the right of return," Fatah leader Yahya Rabah told Al-Monitor.

“What Hamas is doing is a degenerate and unpatriotic act and we won't keep silent on its mistakes in the protests," he added, stressing that dozens of Fatah members have been killed and hundreds wounded since the protests began March 30.

According to Gaza Ministry of Health statistics, 112 Palestinians were killed and about 13,000 wounded in the protests through May 20. The Israeli army's use of live ammunition against unarmed Palestinians along the border fence was lambasted internationally.

The UN Human Rights Council said May 18 it will investigate the shootings. Israel claims the council is biased against Israel.

Meanwhile, Hamas spokesman Hazem Qassem told Al-Monitor that Fatah’s withdrawal from the protests is unfortunate and not in line with the Palestinian national consensus to support and participate in the return march until the end. Qassem expressed hope that Fatah will change its decision and rejoin the rest of the factions.

Qassem also stressed that Hamas and the other factions will continue their march to achieve their goals despite Fatah’s withdrawal. He said the protests reaffirm the Palestinians’ right of return to the homes from which they were forcibly evicted, despite attempts to blur that right, including some US decisions and Palestinian Authority interactions with Israel over previous years.

Through strong participation in the return march protests, Qassem said, the Palestinian people are sending a message that they will no longer accept the dire humanitarian situation, or the 12-year blockade on the Gaza Strip. He said they are also emphasizing their absolute rejection of the United States transferring its embassy from Tel Aviv to Jerusalem, which took place May 14. Ahmed Abu Artema, an organizer of the return march, told Al-Monitor it is a unifying popular choice, regardless of the withdrawal of one faction or another. Artema stressed that these protests are a prelude to a peaceful struggle that will continue and evolve as long as Israelis continue their occupation of the Palestinian territories.

According to Artema, these protests have brought the Palestinian cause back into the limelight, and unified and rallied Palestinians who unanimously believe their right of return, for which they have been fighting for more than 70 years, is the most important issue.

These protests have helped place more pressure on Israel and revealed its true colors to the world, he said, noting that Palestinians have opted for nonviolent resistance at this time, although they could have chosen other avenues, such as armed resistance.

Talal Awkal, a political analyst and writer for the Palestinian daily Al-Ayyam, told Al-Monitor that Fatah’s withdrawal from the protests will affect their momentum, as other factions will have to rally more people to compensate for any shortage. He noted that the protests became more disciplined following Israel's deadly assault against demonstrators May 14, which in one day killed more than 60 and wounded 2,771. Since then, the number of protesters killed and wounded has noticeably declined. Awkal believes this march will remain a thorn in Israel’s side despite being peaceful.

Awkal expects march organizers, especially Hamas, to reach political understandings with Egyptian authorities, who have sought to prevent protests from turning into armed confrontations. Some demonstrators are staying far back from the border fence.

Mustafa al-Sawaf, a political analyst and former editor of the local Felesteen newspaper who is also close to Hamas, said Fatah’s grounds for withdrawing from the protest are baseless and unrealistic. He said Fatah's participation since the beginning was mostly for appearances.

“Whoever saw the march of Friday, May 18, after Fatah announced its withdrawal, can tell that its participation had been symbolic and ineffective. The turnout of demonstrators was massive and was not affected by Fatah’s withdrawal or by the brutal massacre by the Israeli army May 14,” he said.

The protests have lost momentum in the past few days, mainly because of Israel's attack on the demonstrators and the start of the holy month of Ramadan, as well as talks about political negotiations between the organizers of the march, Egypt and Qatar. The protests, however, are likely to continue until June 5, the ending date set by the organizers.