The truth about Gaza

Misleading and untrue information about the recent demonstrations and violence on the Gaza border have concealed the fact that the Great Return March was planned and conducted as a nonviolent protest by the Palestinians. 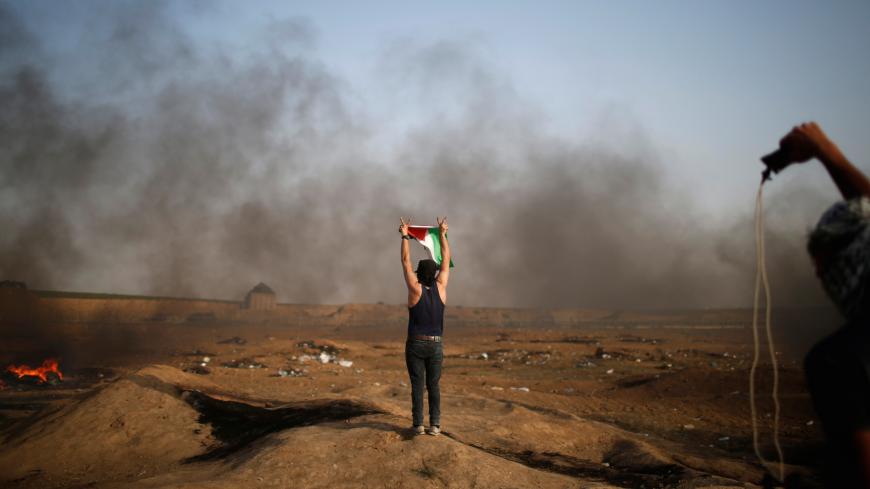 A demonstrator gestures during a protest where Palestinians demand the right to return to their homeland, at the Israel-Gaza border, east of Gaza City, May 18, 2018.

The assertion that “the first casualty of war is truth” applies not only to violent conflict but also to violent attacks by state authorities on unarmed protesters, as recently occurred in Gaza. Israeli and US officials continue to produce untruths and half-truths about what Palestinians call the Great Return March and Israel's bloody attempts to silence protesters with snipers. Serious media attempts at debunking their warped descriptions are rare.

Hasbara, a form of Israeli propaganda aimed at international audiences, religiously repeated three particular claims, or myths, and US officials, as well as major Western media, have for the large part further spread them: The protests in Gaza were violent; the protests were instigated by the “terrorist” Hamas; and Israel merely acted in self-defense, protecting itself as any sovereign nation would.

Perry Cammack, a fellow with the Middle East Program at the Carnegie Endowment for International Peace, told Al-Monitor that the March 30 protests are a move away from violent militancy among Palestinians, including Hamas. “This is clearly a new trend in Palestinian society that attempts to expand the notions of resistance and nonviolent protests.”

Great effort was made to ensure that no weapons were used, and a lot of work went into highlighting various symbols of the Palestinian struggle for independence and the right of return. Among the latter were tents (representing refugee camps) and old keys (symbolizing the keys to the homes Palestinians fled in 1948). Also featured were images of Handallah, a cartoon figure symbolizing Palestinian refugees yearning to return to their land.

The political scientist Norman Gary Finkelstein, whose recently published “Gaza: An Inquest into Its Martyrdom,” told Al-Monitor that the Palestinians are in a no-win situation.

“Palestinians, including Hamas, were lectured that their protests should be nonviolent,” he said. “‘Where is the Palestinian Gandhi’ was a question often repeated to Palestinians, but when Hamas is engaged in nonviolent protests, we are told that because Hamas members are participating in the demonstrations, they are a legitimate target.”

Finkelstein believes that when you shoot and kill unarmed protesters, “You are telling them, ‘Arm yourself.’” He noted that the Israeli claims of violence are easily debunked by looking at the injuries and deaths that occurred to Israelis during the so-called violent protests. He remarked, “Since March 30, not a single Israeli soldier or civilian was injured or killed. On May 14, one Israeli soldier was scratched.”

Finkelstein, an American Jew whose family survived the Holocaust, said the Israelis should have been “celebrating” the change from launching rockets and digging tunnels to unarmed protests. He noted that during the first weeks of the protests, Israel was complaining that the demonstrators were using mirrors to blind the snipers and sending burning kites across the border to torch Israeli farms.

“The reality is that Hamas operatives were checking demonstrators to ensure that they were unarmed and didn’t carry any weapons or arms in the nonviolent protests,” he said. No Hamas flags or posters were visible at the protests.

Israeli claims that the protests were violent made little sense. The high death toll among Palestinians engaging in unarmed protest thus forced Israelis and their apologists to create a new claim, namely, that Israel had acted in self-defense.

James Brownsell, managing editor of the New Arab, wrote on May 14, “[The] ‘threat’ posed by these unarmed protests is not personal but political-existential, maybe. And that is why they were killed. It is not possible to overestimate the lengths to which the Israeli military and political establishment will go to keep hold of what they have built over the past 70 years of embracing the dispossession and displacement of Palestinians.”

On May 14, Israeli forces deliberately targeted medical personnel, who were easily identifiable. Tarek Loubani, a Canadian physician who was shot by Israeli snipers, explained what happened in an interview on Canadian TV.

"I was away from the protest scene in a relative lull. There was no smoke or tear gas. There had been lots of that earlier in the day. I was with my medical team of first responders. They were mostly paramedics. We had just resupplied for tourniquets, which we used to stop bleeding and people who are shot in the arms or legs. All of a sudden, I heard an incredibly loud bang. I ended up on the ground. I was shot in both legs," he said, adding, "The bullet came from the left [side] of my left leg, went through the left leg and then through the right leg."

Ramzy Baroud, editor of Palestine Chronicle, wrote in the Saudi daily Arab News that the US administration had issued a statement claiming “Israel has the right to defend itself,” while White House officials "[paid] no heed to the ludicrousness of the statement when understood within the current context of an unequal struggle."

"Peaceful protesters were not threatening the existence of Israel; rock-throwing kids were not about to overwhelm hundreds of Israeli snipers, who shot, killed and wounded Gazan youngsters with no legal or moral boundary whatsoever," he continued.

Finkelstein used colorful language to rebut the self-defense argument, and stated, “Even critics of Israel, it seems to me, are misrepresenting the law and the situation.”

Another excuse for the brutal violence by Israeli troops is that the demonstrators were from the Islamist Hamas movement. To support this theory, the Israeli army published a clip showing a Hamas official who on May 16 claimed that of the 110 Palestinians killed, 50 were Hamas members. The New York Times ran columns by a march leader and a participant who do not belong to Hamas and who provided context: Fadi Abu Shammalah, executive director of the General Union of Cultural Centers in Gaza, wrote “Why I March in Gaza” (April 27), and Ahmed Abu Artema wrote “I Helped Start the Gaza Protests. I Don’t Regret It” (May 14).

In an interview with Nabeel Diab, a member of a grassroots Gaza organization, Mondoweiss reported, “The idea was born after the massive Nakba Day demonstration in 2011 when thousands of Palestinian refugees in Jordan, Lebanon, Syria, Egypt and the Palestinian territory marched to the borders with Israel to demand their collective right of return to their homelands.” Diab bluntly said, “The Israeli government’s allegations that Hamas organized these protests are lies.”

According to Israeli journalist Amira Hass, Hamas inflated the numbers of its members participating in the march in part for internal reasons. Hass’ May 15 column is titled “It's Not a 'Hamas March' in Gaza. It's Tens of Thousands Willing to Die.”

The Israeli and US spin machines have had initial success in shifting blame onto the victims, but as the world comes to understand what is really happening in Gaza, and the truth prevails, their claims will quickly evaporate.