A judicial clampdown on demonstrators and lenient treatment of deadly police conduct hardens anti-government sentiment in the wake of Turkey’s protests. 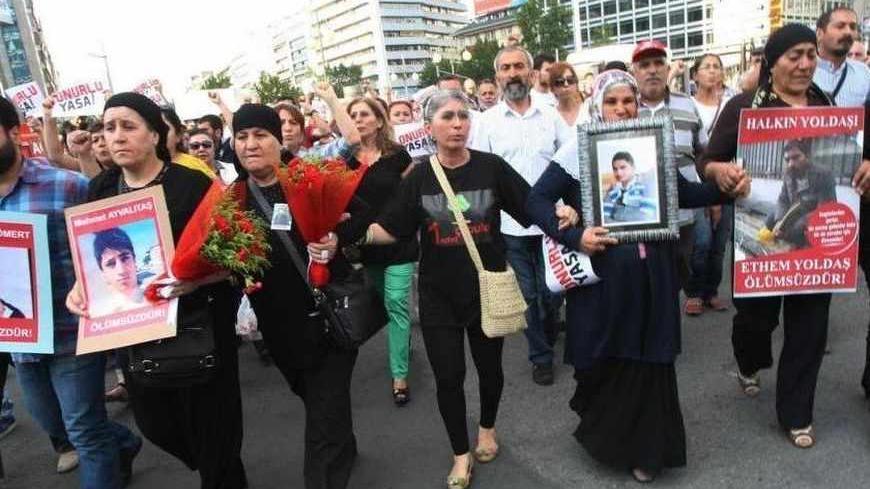 Mothers of slain Turkish protesters lead a march in Ankara on July 26, 2013 to demand justice. - Al-Monitor

Ali Ismail Korkmaz, 19, was savagely clubbed in the head during recent anti-government government protests in Turkey. While he fought for his life for five weeks, almost no effort was made to find the assailants, who, witnesses say, were plainclothes police and government sympathizers. When the young man perished on July 10, the local governor’s reaction bordered on the cynical as he suggested that fellow protesters could have beaten up Korkmaz to defame the police. As the probe finally moved on, key security camera footage from the crime scene was mysteriously damaged, while the photos of officers on duty in the area, provided by police to prosecutors to “help” identification, turned out to be years old.

Korkmaz’s case is emblematic of the shield rising around the violent police conduct while a judicial onslaught targets the demonstrators, hardening the very sentiment that unleashed the protest wave — that Prime Minister Recep Tayyip Erdogan is growing authoritarian and polarizing the nation.

“We no longer expect justice at the courts, but Allah’s justice is omnipotent,” Emel Korkmaz, the young man’s mother, told Al-Monitor on July 26, fighting back tears.

Her elder son, Gurkan Korkmaz, a lawyer, said only one civilian had been so far identified and arrested from the group of men who clubbed his brother late on June 2 in a side street in Eskisehir, where he was a university student. “They will probably put the whole blame on that man and wind up the case,” he said.

Erdogan has hailed the police conduct as “an epic of heroism,” with not even a word of compassion for the four protesters who died and others who were crippled for life. In fact, the first time Erdogan ever mentioned the dead was only recently – and in a disparaging context. “When one, two, three or four people die while attacking the police in Turkey, they raise hell across the world. … But when 300 people die in Egypt … the world keeps silent,” he said in an address to foreign ambassadors on July 18.

In the meantime, nearly 3,700 demonstrators have been rounded up and questioned, some on grounds as feeble as the possession of gas masks, and at least 120 have been put behind bars to await trial, according to the Turkish Human Rights Foundation. Police have accused leading civic groups such as the Ankara Bar Association and the Turkish Medical Association (TTB) of inciting the protesters, whom Erdogan has described as the domestic leg of an international conspiracy to topple his government.

The unrest, which erupted on May 31 at Istanbul’s Gezi Park and quickly spread to other cities, claimed a total of five lives, including a policeman who fell off a bridge. About 8,100 people were wounded, including 60 with serious head injuries and three who remain in life-threatening condition, according to TBB figures compiled between May 31 and July 15. Eleven people lost an eye. Most injuries were caused by gas capsules, fired directly and indiscriminately at protesters and passersby as well as into private businesses and homes.

Impunity for the security forces is hardly a novelty in Turkey. This seems to be exactly what emboldened scores of stick-wielding government sympathizers to join the police in chasing and beating protesters. On July 19, Erdogan went as far as to urge people “to not expect everything from the state” and take to court neighbors who banged pots and pans in support of the protests.

Mourning and desperation mixed with anger and resolve in Ankara on July 26 as relatives of the dead, led by mothers, marched in the city center to demand justice, joined by a crowd of supporters.

The march ended at the spot where 26-year-old Ethem Sarisuluk was shot fatally in the head on June 1. The policeman, according to the prosecutor, acted in self-defense against violent, stone-throwing demonstrators. The Sarisuluk family’s lawyers, however, say the officer had already taken his pistol out when he dashed toward the protesters.

Despite footage of the shooting, it took three weeks for the suspect to appear before court. Briefly detained and then released, he remains the only policeman charged so far in the protests.

Sarisuluk’s mother, Sayfi, calls Erdogan a “murderer” and hardly restrains the curses she wishes to befall the premier. “I’m not afraid. What do I have to be afraid of? My son is gone. Tayyip should be ashamed!” she told Al-Monitor.

The Sarisuluks, the most outspoken among the families, are watched by plainclothes police and regularly harassed on the phone by unknown people, according to Ethem’s brother, Mustafa.

A third protester, 22-year-old Abdullah Comert, was killed in the southern city of Antakya on June 3. No one has been questioned in his death yet, even though 18 witnesses have testified he was hit by a gas canister fired from one of the three police vehicles deployed to disperse the protesters, Comert’s brother Zafer said. “They are trying to weary us. We know who the perpetrators are and we know who is protecting them. It’s a psychological war,” he added.

The fourth victim, 19-year-old Mehmet Ayvalitas, was killed on June 2 when a car drove into a crowd of protesters marching in Istanbul. Officials say it was a traffic accident, but the family suspects it could have been a deliberate hit.

Strikingly, all four dead belong to Turkey’s pro-secular Alevi religious community, which feels especially ostracized by Erdogan’s Islamist-rooted government. Korkmaz and Comert hail from the sect’s distinct Arab Alawite branch in Antakya, on the Syrian border, where tensions were already high over Ankara’s support for the Syrian opposition and militants using the region as a logistical base.

There is no reason to suspect the victims were deliberately targeted, but the deaths do confirm that Alevis were at the forefront of the protests. Korkmaz’s death rekindled the fury in Antakya, where protesters continued to erect barricades amid heavy security presence last week.

At the march in Ankara, a Kurdish woman stood out — the mother of Medeni Yidirim, 18, killed on June 28 in the southeast when soldiers opened fire on a crowd protesting the construction of a new military outpost. The Gezi protesters have embraced Yildirim as one of their own to underscore their message of pluralism and tolerance. “Long live the fraternity of the peoples,” the crowd chanted as Fahriye Yildirim addressed them in Kurdish.

“The way the state treated us during and after the protests came as no surprise. What hugely surprised me, though, was the outpour of solidarity among the people. We should build on that and continue to fight for democracy,” Mustafa Sarisuluk said.

The five families are considering making simultaneous complaints to the European Court of Human Rights on the grounds that they have been deprived of effective legal recourse at home.