Erdogan Shows His Softer Side

Some Turks question why Prime Minister Recep Tayyip Erdogan cries over the death of an Egyptian protester but not a Turkish one. 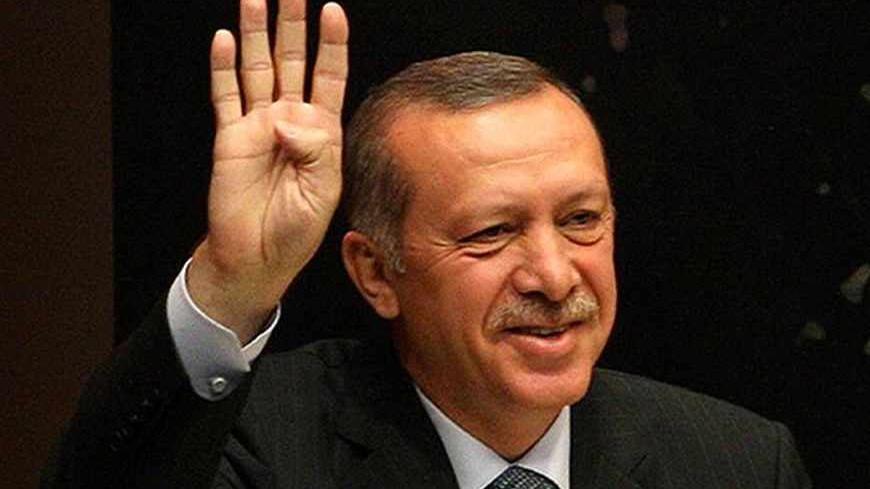 Turkey's Prime Minister Tayyip Erdogan gestures as he gives a speech during a meeting at his ruling Justice and Development Party (AKP) party headquarters in Ankara, on Aug. 20, 2013. - AFP/Getty Images

As the saying goes, an ember burns where it falls. When there is a funeral in a house, it is only natural for the neighbors to share the pain but not be affected as strongly and deeply as those from that house. When Turkish Prime Minister Recep Tayyip Erdogan shed tears on the night of Aug.22, during a live television broadcast, the moderator decided to end the program as Erdogan was not able to break out of his emotions and carry on the conversation. This has created questions as to why he has become oversensitive about the death of Asmaa al-Beltagy but not Ali Ismail Korkmaz.

Let’s make a quick recap. Erdogan was being interviewed on Ulke TV last night when a pre-recorded video with a velvet-like voice read the letter written by Egyptian Muslim Brotherhood leader Mohammed al-Beltagy to his daughter Asmaa, who was killed on Aug. 14 in the midst of the violent protests in Cairo. Asmaa was only 17. “I believe you have been loyal to your commitment to God, and He has been to you,” the father wrote in the letter. “Otherwise, He would not have called you to His presence before me.” As Erdogan’s tears were visible at the inner corners of his eyes, the moderator asked, “What made you so emotional about this?”

“It reminded me of my own children,” Erdogan said as if feeling guilty in neglecting them. “We were coming home late every night around 1 or 2 in the morning. One night, my daughter left a note on the door for me. ‘Why not spend a night with us?’ she asked. But we did not have the time, as we were dedicated to our cause.” Erdogan added, “I'm touched because of Beltagy not being able to hold a funeral service for her, and his maturity in approaching life after death.”

As Erdogan identifies himself more as part of the broader Islamist movement in the region, it is only natural that he would be affected by Asmaa’s death. Still though, his emotional meltdown made it look as if he was from the same house as Asmaa. For a man who often takes to the stage and challenges his opponents, by claiming that he took his shroud in hand when he decided to fight for his cause he might be sending mixed messages about his determination. After all, it is a matter of choice for all to decide how to spend their lives. Erdogan has been blessed —  in a sense — in that he has been elected consecutively to office three times, and having had his daughter working in his close circle, being paid for her services. Therefore, it may be difficult to relate Sumeyye Erdogan to Asmaa today, even though they are both practicing Muslims with their heads covered. And the challenges of the Muslim Brotherhood in Egypt and the Islamist camp in Turkey have not been really identical.

Turks who have been fiercely reacting to Erdogan’s tears over Asmaa’s death, however, keep questioning where he draws his identity and belonging from. As the prime minister of the Republic of Turkey, does Erdogan still feel more loyal to the Islamic cause than to this nation? Why is he losing himself in grief as if the funeral is at his house?

The reason why such a question is raised is the discovery of 18-minute video footage of the fatal beating of Ali Ismail Korkmaz, who attended the Gezi Park protests in Eskisehir. Radikal, a daily newspaper, broke the story and deciphered step by step how he was lynched to death in cold blood by people who claimed to be helping the police. The footage also showed clearly that when Korkmaz was sitting still on the pedestrian walkway, a plainclothes cop kicked him in the head not once, or twice, but three times. That incident took place on June 2, and Korkmaz lost his life due to a cerebral hemorrhage in a hospital 38 days later after a long fight for his life.

Turks who are responding online to all the reports published in Turkish dailies today are quite vocal, and questioning why Erdogan does not show the same emotion for Korkmaz’s parents. Many find the prime minister’s tears theatrical, addressing his Islamist base and further attempting to divide people.

For Erdogan, though, the Gezi Park protesters were used by foreign powers, the interest-rate lobby, which is a synonym to attacking the Jewish lobby, which supposedly were jealous of his government’s success and Turkey’s growing influence in the region and beyond as a global power. Erdogan often defined the protesters as “street thugs” or even “terrorists.”

Turks have gone viral in today’s reader comments sections, and have called onto the prime minister to treat his own family as a priority — that is, the Turkish nation, and therefore the loss of Korkmaz's life. Otherwise, Erdogan would be repeating the same mistake of neglecting his family once again — this time the nation as a whole.

The point is not to feel and share the pain of a father losing a daughter. Turks — whether for Erdogan or not — are decent and solid people who know to respect and value life. The question is why Erdogan seems to be giving less value to the death of Turkish protesters than Asmaa’s. People wonder whether they need to sign up for Erdogan's brand of Islamist ideology for him to understand how Korkmaz’s parents are grieving for their son — and are particularly disturbed after watching the footage of the fatal beating that took him away from them at the tender age of 19.