Congress puts US military sales to Turkey in jeopardy

Lawmakers in both chambers want to penalize the NATO ally for detaining an American pastor and signing arms deals with Russia. 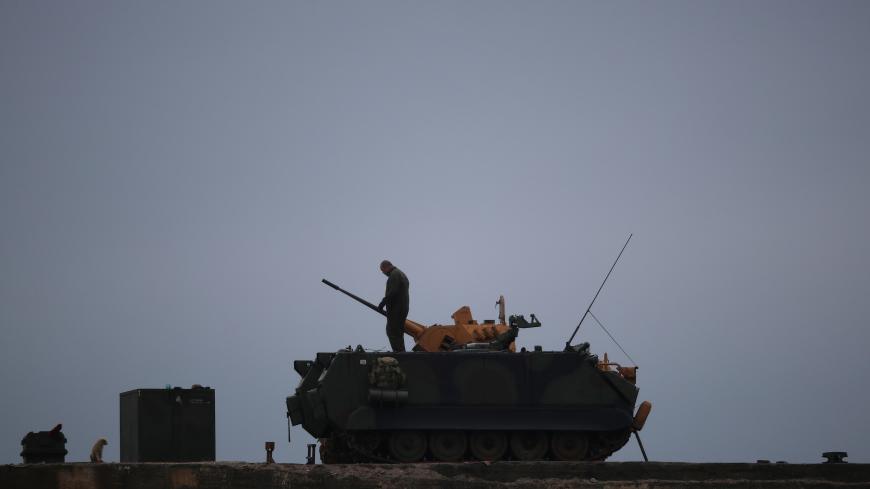 A Turkish soldier stands on an armoured vehicle in a village near the Turkish-Syrian border in Hatay province, Turkey, Feb. 25, 2018. - REUTERS/Umit Bektas

Congressional frustration with Turkey has reached a boiling point.

After months of deferring to the Donald Trump administration and forgoing punitive measures for fear of worsening an already sour relationship with a NATO ally, lawmakers are taking matters into their own hands.

House legislators last week attached a provision to a must-pass defense bill that would curtail major arms sales to Turkey over its impending purchase of the S-400 Russian missile defense system. Their Senate counterparts are gearing up to attach an even more severe weapons ban to their version of the bill.

And lawmakers aren’t stopping there: Several senators are also pushing to sanction senior Turkish officials in retaliation for Ankara’s monthslong incarceration of an American pastor. Turkish retaliation against Israel for this week’s bloodshed in Gaza, including Ankara’s expulsion of the Israeli ambassador and Turkey's calls for an emergency meeting of the Organization of Islamic Cooperation, have further strained relations with the United States.

“What we’re trying to do is to get the attention of [Turkish President Recep Tayyip] Erdogan,” Sen. Jeanne Shaheen, D-N.H., told Al-Monitor. Shaheen is using her seats on the Armed Services Committee and on a foreign aid spending panel to push both measures.

Shaheen’s counterparts on the House Armed Services Committee advanced a defense authorization bill on May 11 that would ban “major defense equipment” sales to Turkey until the Trump administration submits a report detailing the state of US-Turkish military and diplomatic relations within 60 days of the bill becoming law.

“It will slow down anything going to Turkey,” a House staffer told reporters at a briefing before the committee vote. “Members are concerned about the S-400.”

Turkey signed an accord with Russia to buy the advanced missile defense system last December, raising concerns about security and interoperability with US and other NATO weapons among Defense Department officials and members of Congress. Ankara announced last month that it will receive the missiles in July 2019.

Speaking at a press conference earlier this month, Turkish Foreign Minister Mevlut Cavusoglu said he relayed his concerns about the proposed arms sales ban and sanctions proposals to Secretary of State Mike Pompeo.

“I am not obliged to approve decisions taken by an individual country,” Cavusoglu told reporters. “Therefore, the US’ attempt to impose sanctions on us is illogical and wrong. I would retaliate.”

Congress passed a sanctions bill last year penalizing foreign countries for “significant transactions” with major Russian defense firms. The State Department lists Almaz-Antey, the Russian firm producing the S-400s, as one of the banned entities that could result in sanctions on buyers such as Turkey.

The House bill notes that the S-400 sale “could negatively impact common weapon system development between the United States and Turkey” and “exacerbate current [NATO] interoperability challenges with respect to common military architecture and information sharing.”

The report required by the House bill must include an assessment of Turkey’s S-400 purchase, including an “assessment of impacts on other United States weapon systems and platforms operated jointly with Turkey.” The weapons systems in question include F-35 and F-16 aircraft, Patriot surface-to-air missile systems and several helicopters. The report also requires the Trump administration to identify alternative missile defense systems that Turkey could purchase from the United States or other NATO allies in lieu of Russian S-400s.

Finally, the House is also asking for an assessment of “all military activities conducted” from Turkey’s NATO air base in Incirlik, which has been an integral part of the US-led air campaign against the Islamic State in Iraq and Syria. The Wall Street Journal reported in March that the Defense Department is considering permanent cuts to its forces at Incirlik.

“I hope that we can reach some accommodation with the Erdogan administration so that that’s not required,” Shaheen told Al-Monitor.

Although she wants the United States to remain at Incirlik, Shaheen is going even further in a bid to permanently ban the sale of F-35s to Turkey unless Ankara meets several conditions. Turkey has placed an order to buy more than 100 F-35 fighter jets from Lockheed Martin, and Turkish media reported last week that the first delivery is expected June 21.

Shaheen teamed up with Sens. James Lankford, R-Okla., and Thom Tillis, R-N.C., to introduce the bill. Tillis also sits on the Senate Armed Services Committee, and they hope to include their legislation as an amendment when the committee debates its version of the annual defense authorization bill next week.

“Turkey’s strategic decisions regrettably fall more and more out of line with, and at times in contrast to, US interests,” Lankford said in a statement upon introducing the bill. “These factors make the transfer of sensitive F-35 technology and cutting-edge capabilities to Erdogan’s regime increasingly risky.”

While the F-35 bill does not reference the S-400 sale or Russia by name, it would require the president to certify that Turkey is not “seeking to import or purchase defense articles” from countries under US sanctions. The certification would have to affirm that Ankara is not “exposing NATO assets to hostile actors” nor degrading NATO interoperability or the security of NATO member states. The president also would have to certify that Turkey is not “wrongfully or unlawfully detaining” US citizens — a reference to US citizen Andrew Brunson, a minister whose monthslong detention has provoked congressional ire.

“The Turkish government continues to move closer and closer to Russia, as they hold an innocent American pastor, Andrew Brunson, in prison to use him as a pawn in political negotiations,” said Lankford.

Turkey arrested Brunson, an evangelical pastor, in October 2016, accusing him of ties to outlawed Kurdish groups and the exiled Muslim cleric Fethullah Gulen, whom Erdogan blames for that year’s failed coup. Brunson is originally from North Carolina, and Tillis visited Brunson last month to attend his first court hearing. Tillis and Shaheen then led 66 senators in a letter to Erdogan last month protesting Brunson’s detention, warning that they would take “other measures” to secure his release.

In addition to the F-35 ban, Shaheen and Lankford have both vowed to revive efforts to sanction Turkish officials involved in the detention of American citizens by barring their entry into the United States. Both senators sit on the committee overseeing foreign aid spending and have vowed to attach the sanctions as an amendment to the annual spending bill when the panel debates it in June.

Shaheen and Lankford managed to attach a similar amendment to the 2018 spending bill last year, but the language was struck from the final spending package at the request of the Trump administration.