Parochial interests are undermining a united stance against Ankara in the US Senate. 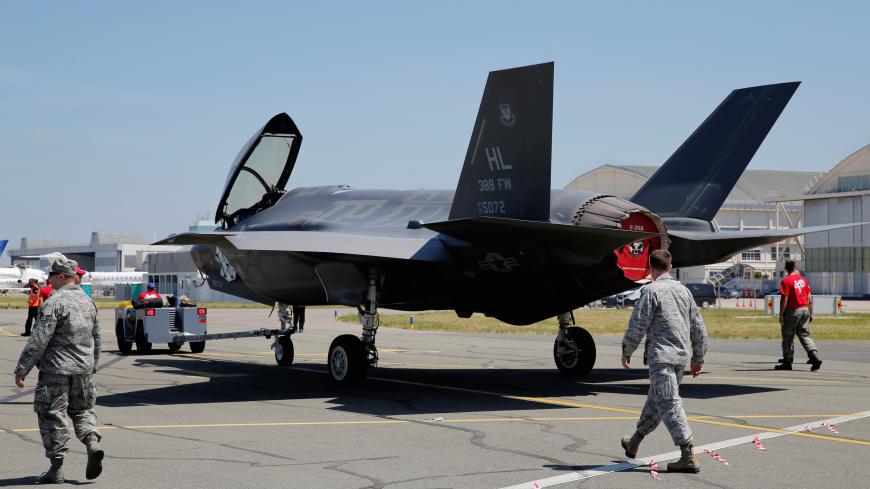 US airmen walk next to a Lockheed Martin F-35 Lightning II aircraft, as it is moved on the eve of the 52nd Paris Air Show at Le Bourget Airport near Paris, June 18, 2017. - REUTERS/Pascal Rossignol

Congress is hamstrung over what to do about the growing number of US grievances against Turkey.

Senate debate ahead of this week’s vote on annual defense legislation has laid bare deep divisions among lawmakers who broadly agree that Congress should push back against Ankara’s moves to imprison a US pastor and buy Russian weapons. The dispute is fueled in part by competing parochial interests pitting US defense industry jobs against human rights concerns, with a multibillion dollar deal to sell more than 100 F-35 jets to Turkey hanging in the balance.

Wary of Turkey’s impending purchase of the Russian S-400 missile defense system and its detention of pastor Andrew Brunson, senators have settled on compromise language that could pave the way for Ankara’s expulsion from the F-35 coproduction program while temporarily halting the transfer of the aircraft to the Turkish government. The provision falls short of the House version of the National Defense Authorization Act, which passed 351-66 last month with language mandating a temporary hold on all major defense sales to Turkey, including F-35 fighter jets.

Turkey’s toughest critics on the Senate Armed Services Committee, Sens. Thom Tillis, R-N.C., and Jeanne Shaheen, D-N.H., sought to ban the F-35 transfers during the panel's closed-door markup of the bill last month. Brunson is a constituent of Tillis, who traveled to Turkey to attend the minister's trial earlier this year.

“What we were trying to do is to address some of the concerns that were expressed on the committee [during markup],” Tillis told Al-Monitor. “That’s what we did. And it’s actually very strong language. It’s a good amendment as it stands, but we’re going to continue to increase the pressure on what I believe is a political hostage situation in Turkey.”

The compromise came about following pushback from senators, notably Sen. Ted Cruz, R-Texas, who worried about the impact on the US defense sector. The F-35s are jointly produced by Lockheed Martin, the nation’s top defense contractor, in Cruz’s home state, in conjunction with Turkey and seven other countries.

“I think banning the F-35s would be a mistake,” Cruz told Al-Monitor. “I do think we should be using a host of sanctions and economic and diplomatic leverage against Turkey, but I think stopping the sale of F-35s is cutting off our nose to spite our face and that would be a mistake.”

Political contributions compiled by opensecrets.org show that Lockheed Martin Political Action Committees donated more than $29,000 to Cruz this election cycle, more than it did to all but two other senators, while Rep. Kay Granger, R-Texas, who represents the district where Lockheed produces the F-35, received $69,000. Lockheed Martin also spent more than $14 million lobbying Congress and the executive branch last year, public disclosures show.

In addition to general concerns about interoperability issues with NATO defense architecture, the Trump administration has raised concerns that the S-400 sale would allow Russia to gather valuable intelligence about the costly stealth fighter aircraft. Assistant Secretary of State for European and Eurasian Affairs Wess Mitchell first warned that the S-400 sale could “adversely impact” Turkey’s participation in the F-35 program during testimony on Capitol Hill in April.

The Senate compromise settles for a temporary F-35 ban, which would remain in place until the secretary of defense submits to Congress “a plan to remove the government of the Republic of Turkey from participation in the F-35 program.” The plan must include a timeline for Turkey’s removal from the program and the “costs associated with replacing tooling and other manufacturing materials held by Turkish industry.”

Ten Turkish companies work with Lockheed Martin to produce the jets, some of which are currently the sole producer of essential parts in the supply chain. Ayesas, for instance, is the only supplier of two major F-35 components — the missile remote interface unit and the panoramic cockpit display. Turkey also produces F135 engines to power the aircraft.

Turkey has ordered more than 100 F-35s, the first batch of which is slated for delivery later this month, according to Turkish media reports. Neither Lockheed Martin nor the Turkish Embassy in Washington responded to Al-Monitor’s requests for comment.

The Senate is also asking the Defense Department to brief Congress on its wind-down plan, including “a component-level description of the current and planned supply chain contributions of Turkey to the F-35 program” and “any components for which Turkey is a sole or majority supplier, or where the removal of components of Turkish manufacture would create significant or lasting disruption to the F-35 program.”

Tillis acknowledged the supply chain concerns even as he pushes to include his original language as a floor amendment to the defense bill this week.

“I’m actually worried that they are such a critical component of the supply chain without any immediate resiliency,” Tillis told Al-Monitor. “I think that this has really raised a number of valid questions about do we really have a resilient supply chain when we may need to increase production.”

Tillis’ original bill would have outright banned the sale of F-35s to Turkey unless the president certified that Ankara not degrading NATO interoperability or “wrongfully or unlawfully detaining one or more US citizens” — clear references to the S-400 sale and Brunson’s incarceration. The House version of the defense bill would ban the sale of F-35s and other aircraft, helicopters and missiles to Ankara until the Defense Department gives Congress an assessment of the impact that the S-400 sale would have on US weapons systems “jointly operated with Turkey.”

Congress passed a new round of sanctions on Russia last year, which requires secondary sanctions on countries that engage in “significant transactions” with Russian defense firms. The State Department has designated the firm producing the S-400, Almaz-Anety, as one of the sanctionable companies but Secretary of State Mike Pompeo said that he hadn’t yet determined whether the sanctions would apply to Turkey when he testified before Congress last month. The Senate bill also contains a nonbinding provision urging the president to implement the sanctions on Turkey should Ankara proceed with the S-400 purchase.