Iraq has gained international support for its efforts to cut terror funding sources as it gathers data on companies and individuals for inclusion in the UN's sanctions list. 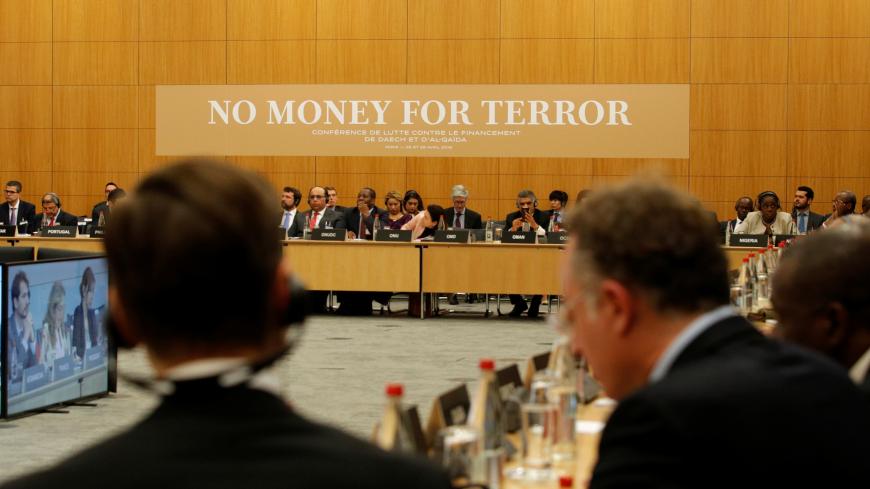 Participants attend a roundtable with international delegates at a conference to discuss ways of cutting funding to groups, including the Islamic State and al-Qaeda, at the Organization for Economic Cooperation and Development headquarters, Paris, France, April 26, 2018. - REUTERS/Philippe Wojazer

The UN’s committee overseeing sanctions on the Islamic State and al-Qaeda has approved an Iraqi request to include Al-Kawthar Money Exchange and its owner Umar al-Kubaysi, as well as Salem Mustafa Mohammed al-Mansour, aka Salem al-Afri, on the UN sanctions list.

On April 17, 2017, the Central Bank of Iraq announced the inclusion of Al-Kawthar Money Exchange and its owner in its blacklist as a result of their support for terrorist groups.

Parliament member Majida al-Tamimi, who serves in the finance committee, told Al-Monitor that Iraq is pursuing the inclusion of "other individuals and companies in the list of UN sanctions upon proof of their funding of IS.”

She said, “I have a lot of documents that confirm the involvement of figures, organizations and banking companies in the support of terrorism.” She declined to name them but confirmed that the government is looking closely at money transfer services, saying, "Funds are sent by parties in Turkey and the Gulf countries and end up in the hands of IS leaders.”

She went on, “Money transfers are done through legal channels because those involved carry official identity cards with clear names and documented information, and they use official methods for transferring the money. Also, contacts are made through new and cheap technologies that enable them to carry out money transfers quickly and easily.”

She revealed that around 45 lawsuits have been filed against money transfer services "in the wake of accusations that were reinforced by Iraqi intelligence.”

While Tamimi predicted that “Iraq will succeed in drying up the sources of terrorism,” Wathiq Jabri, adviser for the Iraqi Center for Media Development, told Al-Monitor that the information in his possession indicates that the Iraqi state is working on names to include in the domestic and UN sanctions list.

He added, “The inclusion of these companies has a decisive impact on the Iraqi and global arenas in terms of cutting off the funds going to IS, especially as the money transfer companies and the financing means are transboundary and multinational.”

“The inclusion of companies on the list of UN sanctions is perceived as progress by Iraqi diplomacy in persuading the international community to fight terrorism,” he noted.

The role of small exchange offices associated with IS seems to have been critical in securing funding, especially in 2014 and 2015, allowing IS to take part in currency auctions organized by the Central Bank of Iraq. IS earned hundreds of millions of dollars in profits this way. According to the French authorities, more than 200 exchange offices in Lebanon and Turkey finance IS’ activities.

Furat al-Tamimi, parliamentarian for the province of Diyala, said in a 2017 press statement, “After its defeat in Iraq, IS is resorting to kidnappings to fund the activities of its dormant cells, and that the ransoms it obtains from the kidnappings amounted to about $45 million in 2017 alone.”

Meanwhile, Iskandar Watout, a member of the parliamentary security committee, told Al-Monitor, “IS has increased its kidnappings in the past couple of months through external roads, the outskirts of cities in the north of Baghdad and areas adjacent to the Kurdistan region, and these currently serve as the main source of funding for the organization.”

He went on, “The security services have monitored antiquities smuggling and trafficking operations carried out by traders who finance IS and smuggle antiquities in the desert far from security control in Mosul and Anbar.”

He pointed to another source of terrorist financing: drug trafficking. He stressed, “Iraqi intelligence agencies have accurate intelligence on the parties and figures that fund IS,” but refused to name any, citing ongoing legal proceedings in Iraq and abroad.

Al-Qadaa newspaper reported April 9, “The terrorist organizations have close links with organized criminal gangs that specialize in money transfers and laundering and the smuggling of people across countries.”

IS seems to be financially hanging on. The Economist reported Feb. 23 that IS still had a lot of money after managing to smuggle $400 million into Turkey and other countries after its defeat in Iraq and Syria. Minister of Labor and Social Affairs Mohammed Shayyah al-Sudani revealed March 24, “A ministry official in Mosul served as a minister within IS,” and noted, “There are employees at the ministry who worked for IS during its control of the city.”