Iraq has received hundreds of Islamic State detainees from Syria and is preparing to try them in Iraqi courts. 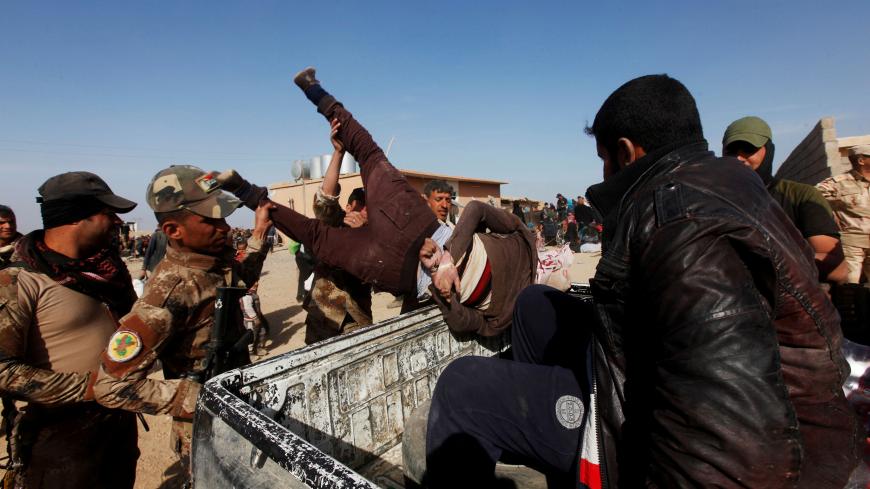 Iraqi Prime Minister Adel Abdul Mahdi said Feb. 26 that Iraq had received 250 Iraqi Islamic State (IS) fighters from the Syrian Democratic Forces (SDF). He further stated that “Iraq intends to try them according to the local Iraqi laws.” On Feb. 24, the media wing of the Iraqi Ministry of Defense justified the agreement with the SDF, stating that by receiving the detainees, Iraq has guaranteed that the SDF will not be able to release them. In addition to the 250 Iraqi IS fighters, Iraq also received 30 foreign fighters and 500 additional Iraqi detainees from the SDF.

Iraqi President Barham Salih announced Feb. 25 that Iraq will also try 13 French IS fighters who were arrested in Syria. Salih did not rule out the possibility of the death penalty. According to Human Rights Watch, this marks "the first transfer of foreign [IS] suspects to be publicly recognized by the Iraqi government, and also comes after many European governments have refused to bring home and prosecute their nationals who joined [IS]."

Iraqi officials have repeatedly tried to justify to the public their motives for accepting IS fighters. Yet public skepticism and fear of returning fighters in Iraq is high, as many Iraqis — especially minority sects who were victims of IS terrorism — fear Iraq will become a safe haven for IS fighters.

On March 1, a special Yazidi committee called for investigations into the detained IS fighters, seeking information about their countries of origin in order to request compensation from those countries. Parliamentarian Rehan Ayoub, a Christian, said, “Iraq will not be a new home for foreign IS fighters.” Many Iraqis fear that the fighters will escape from prison, as happened in 2013 at Abu Ghraib.

Popular pressure on Iraqi officials regarding the fate of the IS fighters has intensified, prompting Chief Justice Faiq Zaidan to meet with judges who specialize in counterterrorism on Feb. 28. They discussed the measures to be adopted when dealing with individuals accused of terrorism who have been deported from Syria to Iraq.

Head of the Iraqi National Intelligence Service, Mustafa Kadhimi, also discussed the issue of detained IS fighters with Zaidan.

Former judge Ali al-Tamimi told Al-Monitor that, according to the Supreme Judicial Council, “Iraq will try IS members depending on the location of the crime or territorial jurisdiction, in compliance with Article 53 of the code of criminal procedure. Article 53 states that if a crime is committed partially or entirely in Iraq by a citizen or a foreigner, Iraqi law applies to it, even if the crime is committed abroad — Syria, in this case — as long as it has effects on Iraqi security.”

He continued, “In case the foreign criminals are not terrorists and did not commit a crime in Iraq, their trial would not be within Iraqi jurisdiction. As for those who committed terrorism, which is what applies to IS members, even if they are foreigners, they would be tried in Iraq because their crimes committed abroad have had effects on the sovereignty and security of Iraq and its citizens.”

National Wisdom Movement parliamentarian Abbas Srout told Al-Monitor, “There is a distinction between the Iraqi authorities’ accepting and trying IS members and the authorities letting IS members take Iraq as a refuge.” He said, “Iraqis categorically refuse turning their country into another Guantanamo or a home for terrorists and their families.”

Fatah parliamentarian Fadel Jaber told Al-Monitor that he expects "a quick trial for IS members.” He said, “The Iraqi people refuse turning their country into a temporary detention center for the involved states.”

Even though Iraqi authorities have affirmed their commitment to give the accused IS fighters a fair trial, Human Rights Watch expressed concern. The group stated that the detainees are at risk of torture and unfair trials in Iraq.

Ali al-Bayati, a spokesman for the UN High Commissioner for Human Rights, told Al-Monitor, “These members are linked to dangerous gangs that destroyed people and places. Demanding a fair trial for them is not only asked of Iraq but of other democratic countries.”

“The crimes of IS members were not personal but linked to organizations, external funding and arms, and international coordination," he said. "This is why they are considered international crimes. Yet Iraq has not signed the Rome treaty."

Bayati said there are two options for the detainees. "The first is to try them individually based on the Iraqi penal code. It would be practical, yet … the parties that supported and funded them would not be held responsible. The second option would be establishing a special Iraqi tribunal, supported by the international community, which would investigate the crimes of IS. It would try IS, reveal facts and have international trial competence. Different countries have to finance this tribunal and the expenses of keeping IS members and their families in Iraq.”

Fatah parliamentarian Hanin Qado told Al-Monitor, "The Iraqi government intends to revoke citizenship for any Iraqi citizen who was involved with IS," though "different Iraqi political parties are still debating this idea."

It is clear that Iraqis were shocked by the news of IS fighters returning to Iraq. Despite the reassurances provided by the government and security officials, Iraqis still fear a secret deal to bring back IS in Iraq.