Turkey has an oddly mild reaction to a bruising report from the European Commission. 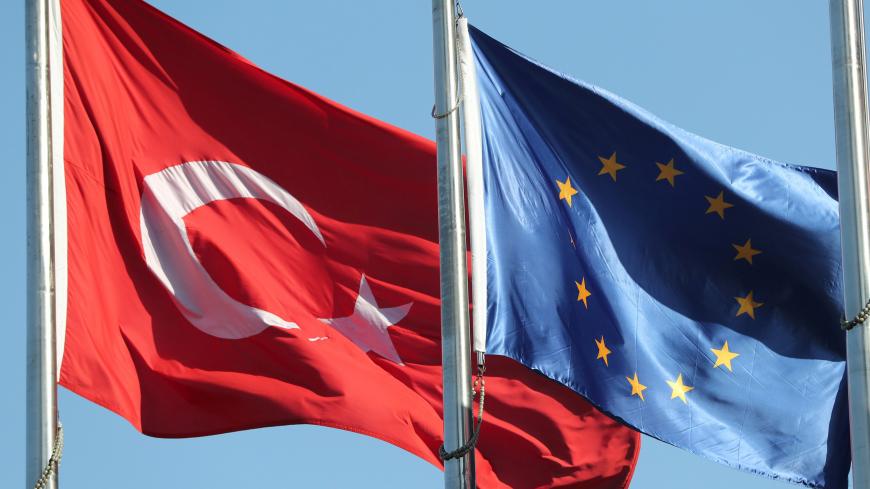 It was no surprise Turkey's latest report card from the EU was its worst ever. The first clue was the report's title. Unlike past "progress reports," this one was simply called the "2018 Report on Turkey." French diplomat Marc Pierini, a former EU ambassador in Ankara and a top expert on bilateral relations, went one step further, calling it the "Turkey Regress Report."

The annual reports by the European Commission assess the efforts Turkey has supposedly made to join the bloc. The commission is often critical, but the April 17 report was like the final nail in the coffin of Turkey's long-running bid for acceptance.

European Commissioner Johannes Hahn, who oversees EU membership bids, told a news conference after releasing the report that Turkey "continues to take huge strides away from the EU, in particular in the areas of rule of law and fundamental rights."

Ankara was quick to respond. In less than two hours — around midnight — the Ministry of Foreign Affairs issued a statement.

"Unfortunately, the European Commission showed that it was once again unwilling to understand the difficulties of the period we are passing through. Although we have explained these issues repeatedly, supported by documentation, the Commission was unable to be objective and balanced," the statement said. "It is inconsistent for the EU to allege that Turkey is distancing itself from the EU while it continues to obstruct Turkey’s accession process with artificial and political blockages."

A day later, government spokesman Bekir Bozdag reiterated the Turkish position and said positive statements included in the report didn't mask its unfair treatment of the country. "Turkey isn’t the one moving away from the European Union. The side that is not objective — and is, unfortunately, biased and unfair — is the EU. … Despite this, we have not abandoned our European Union goal, and we have no intention to do so going forward," he said.

How should we read this? Turkey won't heed the EU criticisms or its repeated calls for Ankara to reverse the negative trend as a matter of priority. For instance, the report strongly emphasizes the importance of "ending the state of emergency," yet Turkey voted to extend it for three more months on April 18 — for the seventh time. The state of emergency, first implemented after the failed coup attempt in July 2016, has become an accepted of mode of governance for the current regime. The authoritarianism that replaced democracy will continue.

Ankara, however, still claims it will pursue membership, and its response was uncharacteristically mild. The foreign ministry's statement even went so far as to commend the EU. "We note the European Commission’s objective and constructive stance concerning the visa liberalization [visa-free travel] dialogue and the update of the Customs Union between Turkey and the EU, and invite the other concerned institutions of the EU to channel their efforts toward finalizing these issues. To that end, Turkey has done its fair part."

Such a sugary response indicates that the harshest EU report is actually toothless. As long as Turkey doesn't budge from its "strategic priority" of EU membership, the EU will apparently maintain the status quo with Turkey. That is, as Pierini puts it, cooperation will go on at lower levels, but it will remain arduous.

That's the EU's optimal state for the relationship and for continuing the game of chicken with Turkey: Neither wants to be the first to back down. Some see this as the EU merely stringing Turkey along.

In fact, the report drew instant criticism for being all bark and no bite from Kati Piri, the European Parliament’s Turkey rapporteur. The Dutch member of parliament has been an ardent defender of democratic rights and freedoms in Turkey.

"The commission’s analysis of last year’s developments in Turkey is grim, as expected," she wrote on her blog. "However, the commission fails to draw any political conclusions. The delusion of [potential] EU membership is kept alive, even when a new [Turkish] constitution has been approved which fails to safeguard the basic principles of a democracy. The commission missed the opportunity to send a clear message to President [Recep Tayyip] Erdogan that his policies will have consequences for Turkey’s EU accession process — as [parliament] already [made clear] last year."

She continued, "Under the current circumstances, there is no room for new initiatives with Turkey, such as the modernization of the customs union and the introduction of visa-free travel."

In her brief but powerful assessment, she underlines why the harsh report is simultaneously spineless. It conveys no political message to Turkey, not even a subtle message to Erdogan that the EU might use leverage in response to his disregard of EU recommendations. The tangible result won't go beyond reciprocal communiques and statements full of stereotypes and cliches.

So where are we with regard to Turkey-EU relations? Business as usual. All quiet on the Western front.