Amid a wave of government-driven nationalism, Turkey’s latest “national” project is to develop a strong pharmaceutical sector. 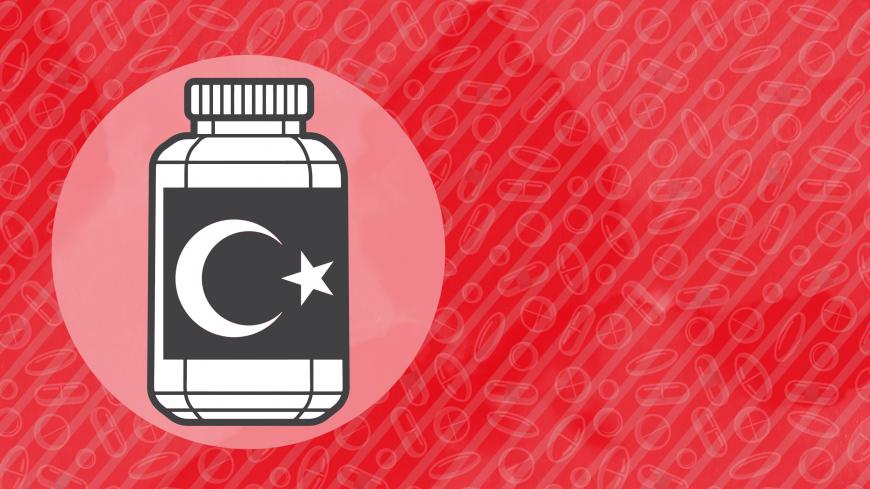 Turkey wants to become an international player in the pharmaceuticals sector by locally producing medicines and molecules and subsequently exporting them. - Image by Hugo Goodridge/Al-Monitor

An emphasis on the “native and national” has lately become a central theme in the political rhetoric of Turkish President Recep Tayyip Erdogan and his Justice and Development Party (AKP). After projects for locally made tanks, warplanes and other weaponry, they are now calling for “national medicines.”

Turkey pays billions of dollars each year for imported medicines and medical devices as well as for the use of pharmaceutical patents and licenses, so the stated objective is a pharmaceutical drive in production and exports to keep all those billions at home. One of the main priorities to that effect is to lure expatriate Turkish scientists back to Turkey.

Aziz Sancar, professor at the University of North Carolina, Chapel Hill, and co-laureate of the 2015 Nobel Prize in Chemistry, is perhaps the first name that comes to mind. Other Turkish scientists are involved in disease research and the development of novel drugs and medical devices at a number of prestigious US institutions, including Johns Hopkins University, Harvard Medical School, BioMed X Innovation Center, Brown University and Charles River Laboratories.

According to Ugur Terzioglu and Oguz Kalafat, chair and deputy chair of the American-Turkish Business Development Council, respectively, Prime Minister Binali Yildirim is personally keeping tabs on the national medicines project. Terzioglu and Kalafat have said that Turkey pays 25 billion Turkish lira ($6.5 billion) each year for pharmaceutical patents and licenses and estimate that at least $9 billion to $10 billion could be kept at home through the local production of drugs and molecules and subsequent exports.

Terzioglu argues that Turkey has long neglected Turkish scientists in the United States. “They are all resentful toward Turkey because no one has knocked on their doors,” he said in an interview with Dunya. “We need to embrace those scientists.”

The project involves a plan to establish a Turkish Health Investments Fund, which would form partnerships with US pharmaceutical companies, buy company shares and acquire representation in their management. The fund would also support research by Turkish scientists and encourage them to register their patents and licenses in Turkey.

According to Kalafat, an initial sum of some $100 million is needed for the fund, which would involve a government contribution as well as its participation along with contributions from companies and investors. Some well-established Turkish pharmaceutical companies — Abdi Ibrahim, Eczacibasi, Ersin Erfa, Turgut Ilac and Turkuaz Medikal — have confirmed that they will join the fund.

Stressing that Turkey currently has to pay to manufacture patented drugs, Kalafat said in a Karar interview, “The target is to produce our own molecules. We will bring leading Turkish firms together. Currently, 13 countries produce their own molecules, including the United States, Israel, Korea and Japan. We want to become the 14th country capable of molecule production.”

Speaking at a March 14 ceremony marking Doctors’ Day, Erdogan denounced the “squander of billions of dollars,” all to the benefit of foreign pharmaceutical giants, stressing that the government places great importance on local production. “We will not let the drug issue become a local black hole,” he said. “I believe very important steps will be taken on this matter in the coming period.”

Meanwhile, Yildirim has proclaimed that Turkey's target is “100% local drug production.” Thanks to efforts to that effect thus far, the number of locally produced drugs rose to 577 in 2017, he said, pledging that Turkey will become a “global power in biotechnology.”

A standout in the effort is the Biomedicine and Genome Center in the Aegean city of Izmir. One of its objectives is to draw up a genetic map and produce drugs “special to Turkish genes.” The center, founded in 2015 at Dokuz Eylul University, aims to become a genome research hub on a global scale, focusing on genetic diseases and medicine production.

Another important initiative is the Turkish Biotechnological Medicines Platform, a project initiated by the Pharmaceutical Industry Employers Syndicate (IEIS) that brings together all the medicine manufacturers in the country. According to IEIS Secretary-General Turgut Tokgoz, completed and ongoing infrastructural investments in biotechnology currently total $820 million, while another $485 million has been invested in research and development projects. Tokgoz expects important achievements in the next five years.

In Turkey, the government is the biggest spender on drugs. The Social Security Institution (SGK), which meets the health care expenditures of millions of people, has seen its yearly deficits increase. The SGK paid more than 25 billion lira for drugs in 2017, and the figure is expected to rise to some 29.2 billion lira this year and to 38.5 billion lira by 2020.

According to IEIS data, Turkey’s drug imports stood at $4.97 billion in 2017, while its drug exports totaled $890 million. In short, the exports covered only 17.9% of the imports.

The Turkish drive for a spot in the global pharmaceutical sector will involve investment incentives by the government in the form of revenue guarantees, similar to the multi-billion-dollar guarantees the treasury currently provides private companies for large-scale infrastructure projects.

In the ongoing infrastructure projects, the companies enjoy revenue guarantees but have a limited operational period of 15 or 20 years, after which they hand over the facilities — airports, bridges, dams and motorways — to the state. When it comes to medicines, however, the plan to offer purchase guarantees — for products that do not yet exist and will be subjected to processes in which success is not guaranteed —represents a major hurdle. This is also at a time when the SGK is already running significant deficits, which the treasury has to cover through costly borrowing.

The pro-government daily Yeni Safak claims that “certain quarters,” both at home and abroad, are trying to obstruct the local production of medicines. According to the daily, 95% of drugs manufactured in Turkey have foreign patents or licenses with hefty fees. Among the top 20 largest selling drugs on the Turkish market, 11 are US-patented.