Egypt inaugurated the first of its kind and one of the largest pharmaceutical cities in the Middle East, as the country seeks to become a regional center for the manufacture of medicines. 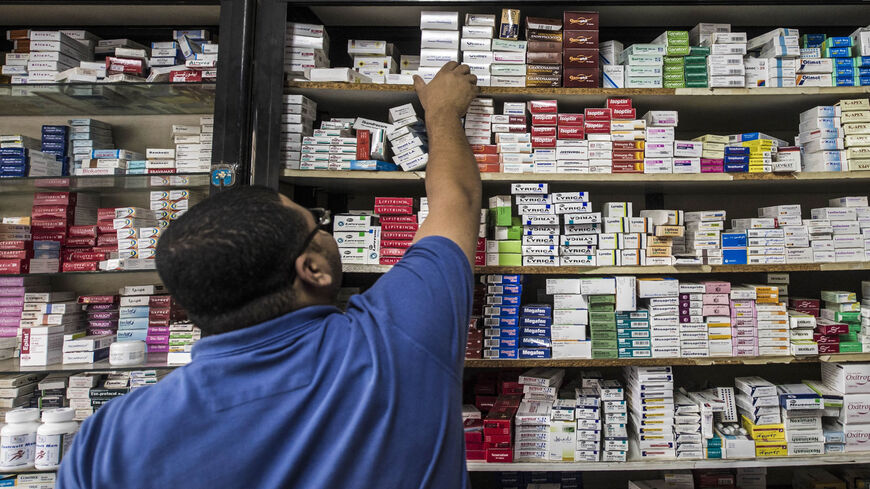 A pharmacy employee reaches out to grab a box of medicine in a pharmacy, Cairo, Egypt, Nov. 9, 2016. - Khaled Desouki/AFP via Getty Images

CAIRO — Egyptian President Abdel Fattah al-Sisi opened April 1 Gypto Pharma City in Khanka in Greater Cairo, which is one of the largest pharmaceutical cities in the Middle East.

According to an April 1 statement by the Egyptian government, through Gypto Pharma City Egypt aims at bolstering cooperation between the government and the private sector to turn itself into a regional hub for the manufacture of medicines in the Middle East.

The statement indicated that the pharmaceutical city aims to elevate the system of good manufacture and implement higher global quality standards, all the while giving attention to trained staff capable of using new technology. It strives to become “the state arm in promoting the health system,” the statement continued.

Egypt’s new pharmaceutical city is working on manufacturing medicines for the treatment of  coronavirus patients and drugs for chronic diseases, such as hypertension, cardiovascular, kidney and brain diseases, and neurological disorders, in addition to some vitamins.

According to the government statement, the city includes 160 lines to manufacture 150 types of drugs; the first stage will include the production of 150 million packages of medicines per year.

Construction of the city began roughly three years ago, in cooperation with European and American companies that have not been identified.

Mohamed Awad Tageldin, health adviser to the Egyptian president, told Extra News channel April 1, “The project has been studied for seven years, and it is a boom for the pharmaceutical industry in Egypt and a huge addition to it.”

He said, “The coronavirus pandemic undoubtedly proved that we must have huge pharmaceutical industries and strong health institutions capable of providing for all our needs. The issue of medicines has become an important national, security and medical one.”

Tageldin added, “The pharmaceutical city will produce drug types with special properties that the country has never manufactured before. It [the city] will ally with international associations that have huge expertise in the field to localize new technologies in medical production. The industry is expected to flourish soon and venture into producing pharmaceutical raw material based on Sisi’s guidance.”

On April 1, Sisi addressed the government during the inauguration of Gypto Pharma City, highlighting the importance of manufacturing pharmaceutical raw materials locally and localizing the production of cancer drugs, fully made in Egypt.

Pharmaceutical experts who spoke to Al-Monitor said that Egypt hopes the new city will strongly contribute to the pharmaceutical industry and provide the local needs for patients at affordable prices, with the potential of exporting to African and Middle Eastern countries in order to become a regional hub in production and distribution.

Ali Auf, head of the General Division of Drug Traders at the Federation of Egyptian Chambers of Commerce, told Al-Monitor over the phone, “It is the first time Egypt has its own medical city. This is a strong push for modern and advanced production because the city was designed with the highest global standards and will constitute a great addition to localizing the industry and providing highly advanced medication.”

He said, “The new city will also help reduce the drugs import bill from abroad, as we import about 15% of our drugs needs.”

Auf noted, “This city will push Egypt to export medicines abroad, especially to Africa and the eastern Mediterranean countries, at competitive prices relative to other products.”

He added, “It will contribute to meeting the local needs of the industry at reasonable prices. In the presence of competition between the local industry and the remaining investment and foreign companies, this will stabilize and reduce prices.”

Osama Rostom, deputy head of the Pharmaceutical Chamber of the Federation of Egyptian Industries (FEI), told Al-Monitor, “The Egyptian president’s inauguration of the pharmaceutical city carried an important message that the Egyptian state cares about drugs security just as it does about food security.”

He noted, “The local pharmaceutical industry witnessed a setback since the late 1980s, and citizens lost confidence in it. However, they began to regain their faith in it in recent years with the work of foreign companies in Egypt. It is important to prove to the whole world that we manufacture medicines according to international scientific standards. This attracts investors to invest in Egypt, and at the same time helps restore complete confidence in the Egyptian product.”

Rostom added, “The manufacture of medicines in the new city contributes to eliminating the phenomenon of drug industry monopoly.”

He concluded, “This project is an important step in the context of Egypt becoming a regional center for the production and export of medicines to various countries around the world.” He explained the project is essential because “it will not only produce conventional drugs, but it will also venture into making drugs that require high technological techniques, such as cancer drugs and blood products, amid the localization of the raw materials industry, of which Egypt imports about 95% from abroad.”

Tharwat Hajjaj, a member of the Pharmacists Syndicate in Egypt, told Al-Monitor, “We established this city after we understood the importance of expanding the pharmaceutical industry locally, especially with advanced technology, in the wake of the coronavirus crisis and the inability to secure some equipment in the past months, before the state managed to solve this problem at a later time. It is important that we have these tools [in reference to the pharmaceutical city] so that the crisis does not recur.”

Hajjaj said, “Egypt should take its place in the drugs industry because we have been lagging  behind for years."