Patients who depend on pharmaceutical imports for the treatment of cancer and other chronic illnesses suffer as the government fails to reach a price agreement with suppliers. 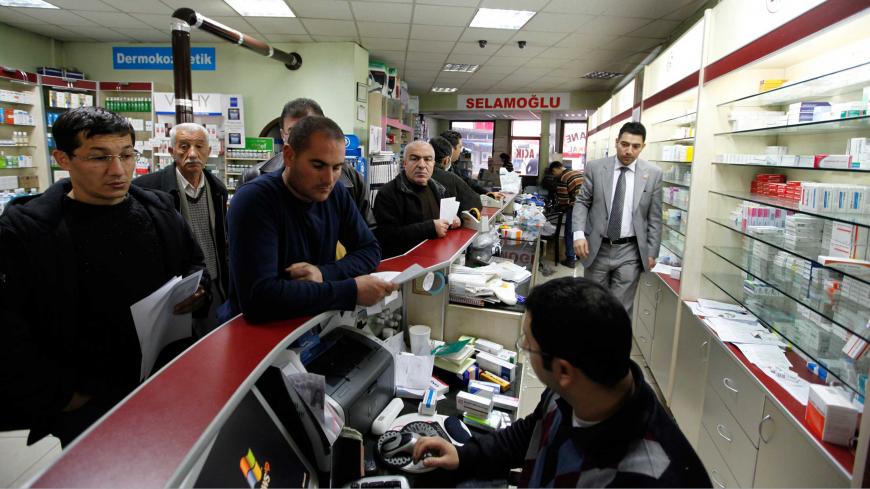 In January, Dilek Ozcelik, a 27-year-old lymphoma patient, passed away. Ozcelik had made the news in 2013 when she asked for help from Erdogan Bayraktar, who was then Turkey's minister of environment and urban planning. Ozcelik refused the roll of cash Bayraktar handed to her. “I am not a beggar,” she said.

She needed access to medicines that weren't available in Turkey.

Since then, the Turkish government has repeatedly talked about grandiose plans to launch “national medicine” projects. Yet, with a growing, aging population, the need for lifesaving medicines also has increased. The data about availability and accessibility of prescription medications shows a problem that has snowballed during the past decade. For example, in 2015 alone, 1,700 pharmacies nationwide closed. Among 25,000 pharmacies, 13,000 are expected to go bankrupt at any time. From 2005 to 2015, the Turkish Pharmacists Union recorded 572 instances in which the Health Ministry called for a drop in drug prices.

This dim picture has only gotten worse with the weakening Turkish lira. In the past couple of months, an increasing number of patients have struggled to get their medication, resorting to creative methods. Not a day passes without a call on social media for help obtaining a needed prescription medication. Most of the time, patients are so desperate they are willing to pay whatever they can to save their loved ones. Even some pharmacists themselves have tried this method to assist their patients. Just like Ozcelik, many patients suffer due to the scarcity of anti-cancer drugs in Turkey. And since those drugs require prescriptions in Turkey, it's not as simple as buying them over the counter abroad and bringing them back to Turkey.

Al-Monitor spoke with doctors, pharmacists and patients to evaluate the current situation. All medical experts fear that the shortages are going to get worse, and soon. Semih Gungor, former chair of the Istanbul chapter of the Turkish Pharmacists Association, noted that economic challenges threaten to overwhelm the medical industry. All the pharmacists Al-Monitor spoke with explained that most of the active ingredients in medicines are imported, and no substitutes are produced in Turkey. The import rate is based on euros and the conversion rate was fixed at around 2.6 Turkish liras. Now, 1 euro equals 7.6 liras. With such a large gap, neither companies that import medications, nor the ones that import the essential chemicals to produce the medicine domestically, can operate.

A pharmacist of 10 years from Ankara who works across from a state-run hospital said, “I'll simply explain how rigid and counterproductive the regulations on pharmacies are in Turkey from my own experience. Let’s assume I'm selling a pill for $11 and I bought it from the depot for $10. Whenever the government wishes, it can — and it has — dictate that [pharmacies] lower the price, let’s say to $8 per unit. Now I am selling [each pill] for a $2 dollar loss. If I purchase goods worth $40,000 and sell them for $30,000, I not only have a net loss of $10,000, but I've also paid taxes on the purchase of $40,000.”

Ilfan Erdem, a pharmacist in Gebze for more than 30 years, emphasized that neither individual pharmacies nor pharmaceutical cooperatives are responsible for the growing drug shortages. She and others concurred that currently the most dire shortages of prescription medications are in cancer treatments, eye drops and other optometry-related drugs, and medicine for hypertension, diabetes and chronic lung diseases.

The knot in this issue is the government, particularly the Social Security Institution (SGK), which conducts almost all medical procurement agreements, including pharmaceuticals. Another pharmacist who has worked in Istanbul for more than 25 years told Al-Monitor, “The SGK pays for more than 85% of all prescription drug costs in Turkey. Considering the growing demand and rising prices, the SGK has a major struggle to keep the prices down. The prices they would like are no longer acceptable for several categories of medicine, or active ingredients in these meds. Therefore, their agreements collapse — so, no more imports. Once we are out of stock in the country, shortages start.”

Similar problems are seen with imported medical equipment as well, due to the SGK's inability to get the prices it prefers. For example, Hurriyet reported Sept. 25 that bionic ear implant operations for minors have been halted simply because the SGK can't import more of the implants.

Erdem explained that her pharmacy receives calls from all around Turkey from families of patients desperately asking for certain medications, simply trying their luck. Another pharmacist from Ankara explained, “If a patient has a prescription for a three-month supply of a medication that is on low supply, we explain the situation and give them a month's supply so that we can spread the medicine to more patients. And we hope that the next month, this crisis will be resolved.”

The Turkish Pharmacists Association also has the ability to independently import certain rare medications for patients. However, the bureaucratic process is slow and most of the time requires hefty payments directly from the patients. When patients realize they can no longer find their pills in any pharmacy in Turkey, acquiring them from abroad is a race against time and sometimes a gambit with legal hurdles.

One medical doctor who works at a state hospital confirmed the observations of several patients. "We are asked to work with the bare minimum: cheaper X-ray machines, limited local anesthetics, even these plastic gloves we wear, and we have to count them. So each day is worse than the day before because the government is counting every penny to cut the costs, but the quality of the services drops as both staff and patients suffer.”

So what can we expect in the coming weeks? Further shortages of imported medications and more pharmacists declaring bankruptcy and shutting down their stores, while an underground economy thrives that promises to deliver prescription medications. They are called “cantaci” and they are an open secret in Turkey. They particularly operate online and near hospitals, and they can provide unregulated medications to those who are able to pay exorbitant fees. Leyla Ozturk, the mother of a 14-year-old cancer patient in Ankara, told Al-Monitor, “I sold my wedding gold for my son’s cancer treatment. Now we get the pills from cantaci. I don't know if they are counterfeit, or how accurate the dosage is. I know I may be paying such high prices for substandard pills, but it is either this or nothing.”

The Turkish government is once more failing to protect the most vulnerable sectors of society. The government refuses to accept the reality of shortages until the SGK agrees to a strong price hike, one can only expect the situation in the medical field to deteriorate rather quickly.