Turkey's economic turmoil, coupled with restrictive government regulations, has led pharmaceutical companies to curb supplies, with 20% of patients returning empty-handed from drugstores, according to sector representatives. 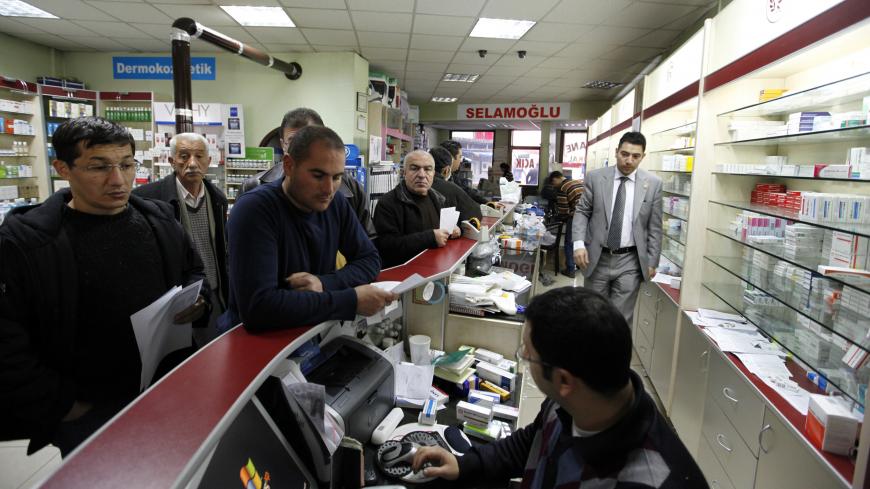 The pharmaceutical sector is the latest field where Turkey’s economic crisis is producing alarming consequences. The severe depreciation of the Turkish lira last year and the corresponding increase in foreign exchange prices have led companies to curb supply, with 20% of patients said to be returning empty-handed from drugstores.

Medicine shortages have plagued Turkey for the past three years. It is a serious crisis that is related to Ankara’s policies and regulations in the sector, which relies heavily on imports. In 2004, the Ministry of Health amended pricing regulations, indexing prices to a fixed lira-euro exchange rate. At the beginning of 2018, when a euro was worth 3 liras, the rate was fixed at 2.69 liras for the year. Yet, following the currency turmoil that shook the country in the ensuing months, the price of the euro stands at about 5.95 liras today. The huge gap between the market price and the fixed rate for the pharmaceutical sector has led companies to cut back or halt supplies, fueling an extraordinary crisis that stands out among crises bruising other sectors of the economy.

Erdogan Colak, the head of the Turkish Pharmacists’ Association, told Al-Monitor that the gap between the fixed exchange rate, which is decided by the Ministry of Health, and the real foreign exchange prices is at the core of the crisis. As the currency turmoil unfolded last year and the gap widened, “shortages began in many types of medicines, especially imported ones,” he said. “The supply of myriad medicines was either curtailed or halted by pharmaceutical companies.”

Nurten Saydan, the chairwoman of the Employer Pharmacists Syndicate, explained that pharmaceutical manufacturers and wholesalers based their production and delivery planning on the timing of price increases. “Many medicines are not available on the market both because year-end quotas are up and companies are waiting for medicine prices to be hiked,” Saydan told Al-Monitor. “Pharmaceutical companies and wholesalers keep deliveries to pharmacies at a minimum level because production and imports have been deferred in anticipation of an increase in [the fixed rate]. That’s why the number of medicines not available on the market is sharply increasing,” she added.

According to Burhanettin Bulut, a parliament member for the main opposition People’s Republican Party and a pharmacist by profession, 417 medicines are not available on the market at present. “There are big shortages in many items, from cancer medications to pills for high blood pressure," Bulut told Al-Monitor. "Those medications have been unavailable on the market for two months. Pharmacies are out of stock."

Bulut said that 25 basic and vital medicines were unavailable in Turkey. "Even medicines such as insulin and blood pressure-lowering medications, which are supposed to be compulsorily available in hospitals and pharmacies, are currently unavailable on the market. Many medicines without equivalents are not available either,” he said.

This crisis in the health sector is more alarming than the hardships experienced in other sectors, since, for many patients, it could mean a life-or-death struggle. The government refuses to acknowledge the scale of the damage the economic downturn is causing, constantly placing the blame on others. In the face of skyrocketing food prices, for instance, it has blamed hoarders and price gougers, which, at one point, led to unprecedented raids on onion depots. Amid a similar approach to the medicine crisis, pharmaceutical warehouses were raided and 32 pharmacies were found to have stocks of medicine.

Commenting on the raids, Bulut said, “There are 23,000 pharmacies in Turkey. The discovery of stocks in 32 pharmacies means nothing. The government cannot resolve the crises in all those sectors — from food to medicines — by blaming hoarders or middlemen. Such tactics are aimed at political gains only.”

The Health Ministry must have also realized the raids were futile, for it later struck a deal with a pharmaceutical company that re-priced 42 medications and paved the way for their return to the market. According to Bulut, this could only be a temporary solution. “One company is the manufacturer of all those 42 medicines," he said. "After the company stopped marketing those medicines, the minister negotiated with the company, adjusted the prices and secured the flow of the medicines to the market. So, the minister could well negotiate with all pharmaceutical companies and adjust prices. It is because the minister’s failure to do that that patients are currently going through a medicine crisis.”

He warned that Ankara’s attitude to the crisis could lead international pharmaceutical companies to leave Turkey. “Because of this chaos on the medicine market, many companies [are considering a] pullout from the Turkish market. In case they do that, Turkey will still have to buy those medicines, but at higher prices. And the higher prices will bear on the pockets of patients.”

Turkey’s economic downturn has already led a number of international companies to quit Turkey. Those in the health sector appear to be next in line. As the deepening crisis takes its toll on one of the most fragile segments of society — the sick — the government’s failure to come up with a fundamental policy solution is further reason for gloom.