The European Union's most recent report on the state of Turkey's bid to join the bloc appears to confirm the view of many analysts that the current process is riddled with hypocrisy and is not beneficial to either party. 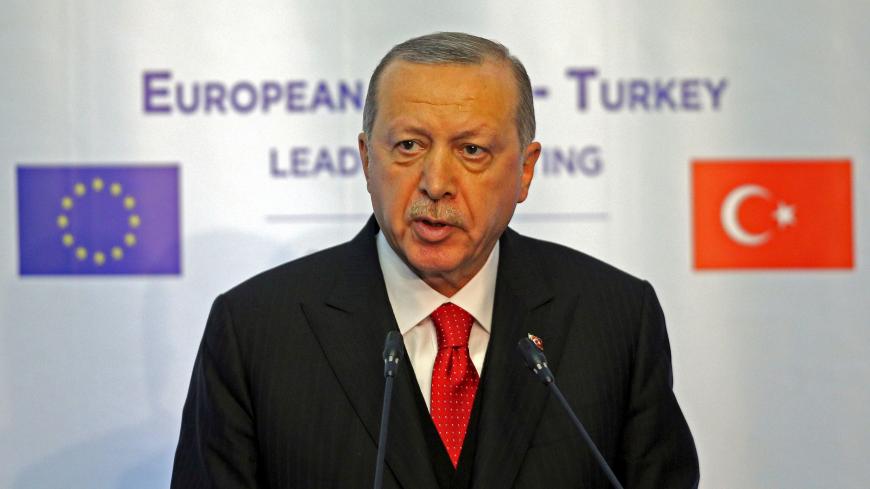 Lost amid Turkish President Recep Tayyip Erdogan's stunning announcement today that presidential and parliamentary elections would be held concurrently on June 24, nearly 17 months ahead of schedule, was the European Union’s yearly report on Turkey’s progress toward full membership in the bloc. The harshest report since talks began in 2005 received scant attention from the press, but it triggered howls of protest from Turkish officials.

The report released yesterday decries the weakening of Turkey's democracy, ongoing mass arrests in the wake of the failed 2016 coup and mounting pressure on civil society along with the lack of a level playing field in the run-up to the April 2017 referendum on switching from a parliamentary system to an executive presidency. In addition, it notes “serious backsliding” in judicial reform and freedom of expression and cites human rights abuses in the majority-Kurdish southeast.

Regarding the state of emergency Ankara imposed after the attempted putsch, the EU wrote that it needs to lift it without delay. The Turkish government extended emergency rule by a further three months the day of the report's release. As for the fight against corruption, the report says, “No progress was achieved.” Under the current circumstances, it is “unthinkable” in the EU's eyes to open new accession chapters. Johannes Hahn, EU commissioner for enlargement negotiations, declared that Turkey was taking “huge strides away” from the bloc.

Omer Celik, Turkey’s EU affairs minister, dismissed the report as unfair, saying, “It is a report which has no vision and content, which is far from understanding the intensity, dimensions and perspective of [Turkey-EU] relations.” He said he would pen a letter of protest to the European Commission on the grounds that the terms of the migration deal Ankara struck with the Europeans were being violated. Under the deal, which Erdogan periodically threatens to trash, Turkish authorities pledged to stem the flow of millions of refugees to Europe in exchange for billions of euros in funding for care of the refugees in Turkey.

Turkey has meanwhile been growing increasingly hawkish toward the EU and fellow NATO member Greece. Tensions escalated in February after a Turkish patrol boat barged into a Greek coast guard vessel close to Imia, a rocky outcrop of islets in the Aegean Sea that both countries claim. On April 16, Turkey accused Athens of “provocation” after the alleged hoisting of a Greek flag by three Greeks on the islets.

The Turkish Foreign Ministry slammed the EU for, as Turkey sees it, siding with Greece in the matter. In an April 17 statement, the Foreign Ministry said, “The Kardak [Imia] Rocks and their territorial waters and airspace above them are exclusively under Turkish sovereignty. The [unconditional] support … by the EU to member states in their disputes with third countries [does] not contribute to the resolution of those issues within the framework of good neighborly relations and international law.“

Analysts say that Turkey’s EU accession process is, in the words of Asli Aydintasbas, a fellow at the European Council on Foreign Relations, cloaked in hypocrisy. Aydintasbas wrote in a recent report, “Most European countries would like Turkey to remain in the limbo between being and insider and an outsider.”

Germany and France began talking about a “privileged partnership” status only days after the accession talks began. Former French President Valery Giscard d’Estaing famously said that admitting Turkey “would be the end of the European Union” because it has a “different culture” (read “Muslim”). Meanwhile, Austria openly opposes Turkish membership altogether.

The mendacity cuts both ways. Marc Pierini, a former EU ambassador to Turkey and a visiting fellow at Carnegie Europe, told Al-Monitor, “Ankara has lost any interest for the accession rationale since it runs counter to the leadership’s domestic political priorities.” Pierini was referring to Erdogan’s bouts of EU bashing, including branding European leaders as “Nazis” in a crudely cynical bid to increase his votes.

Nate Schenkkan, project director for the Nations in Transit project at Freedom House, agrees that Turkey’s current government is not interested in pursuing the reforms needed to qualify for full EU membership. He told Al-Monitor, “The report matters as a record and a document of where the accessions process stands. But it doesn’t change anything for Turkey. They already know the EU’s requirements and have rejected them in deed.”

Still, Pierini said that “even if the tone remains acrimonious,” the hope on both sides is “that dialogue can be maintained on trade, counterterrorism, refugees, and Syria.” The former diplomat concluded, “The Turkish president will keep a dialogue with the EU but not on accession. Since the purge and the ‘Nazi’ remarks, the personal connection with his EU peers is beyond repair.”

Schenkkan argues that a new relationship needs to be struck between the sides. “Keeping the process open as a facade undermines the credibility of accession for other countries,” he said. Even worse, “It allows nationalist-populists in the EU to own the issue of ending accession.”

France’s refreshingly candid president, Emmanuel Macron, apparently agrees. Standing beside Erdogan in January at a joint news conference in Paris, Macron said that “it is clear that recent developments and choices do not allow any progression.” Thus, “We must get out of a hypocrisy that consists in thinking that a natural progression towards opening new chapters is possible. It's not true.”