Greece's new Defense Minister Kammenos led the Turkish and Greek navies and air forces into an unfriendly confrontation on Jan. 30, in what Ankara hopes was a one-time provocation. 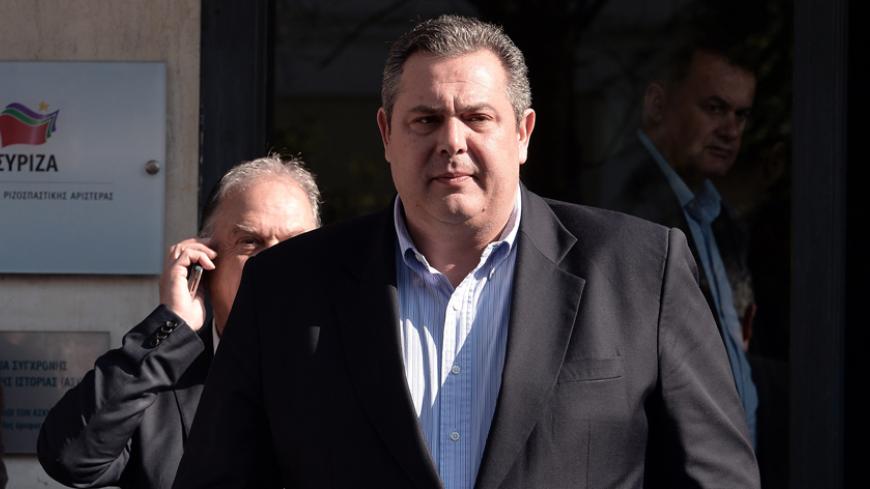 Ankara is curious to find out whether Panos Kammenos, the new defense minister of Greece, will continue with his campaign rhetoric or act like a proper statesman. A senior security official in Ankara who spoke to Al-Monitor on condition of anonymity, said: “If he continues with his populist pre-election language in his new post, this will be a worrying development for us. But we have to see how he performs first.”

Greece's leftist Syriza party won a surprising victory in the Jan. 25 elections, but had to form a coalition government when, with 149 seats in 300-member parliament, it couldn’t go it alone. Young Prime Minister Alexis Tsipras acted quickly, as he had promised, and the next day announced formation of a coalition government with nationalist, right-wing party Independent Greeks, ANEL. Analysts are not having a easy time forecasting how Tsipras will cope with the myriad of tough challenges he is facing.

Many were astounded by radical leftist Tsipras joining up with the extreme right wing. More astonishing was his appointing ANEL's leader, the anti-West Kammenos, also known for his anti-Turkish stand, as the new defense minister. Turkey was most surprised by this appointment.

In foreign policy affairs, Kammenos is an unadulterated nationalist. Rejecting EU and IMF policies on Greece, he accused the EU of using Greece as a guinea pig. He accused Greek politicians of turning Greece into a “concubine of Europe,” and started wearing a T-shirt with the inscription “Greece is not for sale” following the increased pace of privatization.

Kammenos, a devout Orthodox Catholic, homophobic and fervently against illegal immigrants, was also branded as anti-Semitic because of his recent remarks.

Tsipras’ constant references to his plans to save Greece from the shackles of the European troika also signals a security policy free from NATO. Kammenos, who contends US and Western sanctions against Russia have hurt Greece, believes closer ties with Russia and China could mean new financial resources for Greece.

Kammenos is a dedicated anti-Turkey politician. He had actually protested against Prime Minister Ahmet Davutoglu during his Athens visit in December. He was even declared as “undesirable” by Turkey because of his unpleasant references to Turk-Muslim minorities in Greece, one newspaper reported.

The most serious concern in Turkey after Kammenos became defense minister was whether the minor frictions two countries experience at times at the Aegean Sea and in Aegean airspace could escalate to major incidents.

Although Turkey and Greece had been rivals in NATO for many years, the NATO umbrella enabled them to work together and avoid clashes. Today, Syriza’s anti-NATO stance and the anti-Turkey position of Kammenos have become a true riddle both for NATO and Turkey.

In his first remarks after taking over his portfolio, Kammenos said military salaries will be increased, new funds will be found to develop the military, new investments will be channeled to the defense industry and Greece’s security policy will be expanded with new pacts outside of NATO.

Pro-Russia and China views of the new government and its declared need for another alliance to balance NATO could well provide China and Russia with the entry they need to increase their effectiveness in the Aegean Sea and eastern Mediterranean.

To predict how these developments will affect the Middle East, one has to look at the map. Greece’s geographical position allows it considerable leeway in controlling the Aegean Sea, which is the Black Sea’s access to warm seas and to the eastern Mediterranean, which is increasingly important because of the civil war in Syria and prospects for natural energy resources in the region.

Greece’s role in controlling access to the eastern Mediterranean can be amplified if it can develop warm relations with Egypt, which means many will be watching what relations the new Greek government will develop with the regime of President Abdel Fattah al-Sisi in Cairo. If Greece and Egypt can agree on closer ties with Russia, one could easily forecast difficult days for NATO, the United States and Turkey in the eastern Mediterranean.

Then there is Israel. Will Israel handle its relations with Greece by reacting to the anti-Semitic narrative of Kammenos or as dictated by its strategic interests in the region? Whether Israel opts for close or cool relations with the Greek government is a critical dynamic for the balance of security in the eastern Mediterranean.

In short, political preferences of the new Greek government and its new defense minister Kammenos could be the harbingers of important developments for Turkey and the region. The question that needs answers most for Washington, European capitals, Moscow, Beijing and Ankara is whether the Greek government adheres to its pre-election discourse and adopts a revisionist security policy or stays with its traditional alignment with Europe and NATO.

On both sides of the Aegean, the hope is that the first action by Kammenos, which brought the Turkish and Greek navies and air forces into unfriendly confrontation on Jan. 30, was a one-time populist move to prove his credentials. Greece’s new defense minister started his term by reportedly leaving a wreath off the waters of the two small uninhabited rocky Aegean islets that led Ankara and Athens nearly to the point of war in the past. Kammenos went to the disputed Aegean islets of Imia/Kardak in a military helicopter on Jan. 30, according to Greek media, when seven Greek coast guard boats faced three Turkish ones off the islets, as Greek and Turkish fighter jets harassed each other.