It is increasingly difficult to distinguish between rhetoric and reality in the deteriorating relationship between Greece and Turkey. 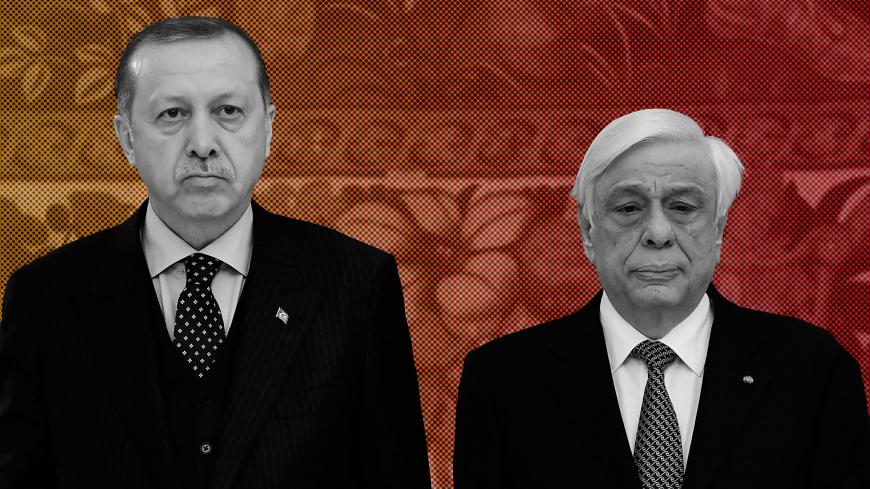 Two Greek soldiers tracking footprints on the Turkish-Greek border crossed into Turkey on March 1. Greece insists that the young soldiers had accidentally strayed into a Turkish military zone due to heavy snowfall that had impaired their vision. Turkey, however, arrested the pair on espionage charges.

Prime Minister Alexis Tsipras and his Syriza government are taking a somewhat subdued approach to the issue of the soldiers, agreeing in an internal Cabinet meeting that Turkey, a NATO ally, would “sooner or later” drop the issue instead of exploiting it further. Athens, and the European Union by extension, is not interested in escalating tensions with Turkey beyond rhetoric.

But the arrest and detention of the two Greek soldiers is only the latest in an ongoing saga between the two countries. Tensions have been particularly high since Recep Tayyip Erdogan’s historic, albeit controversial, visit to Athens last November. The Turkish president spoke of revising the 1923 Treaty of Lausanne, which delineates the Turkish-Greek border and is a cornerstone of the two countries’ peace agreement.

Relations have particularly deteriorated since Athens refused to extradite eight Turkish soldiers accused of involvement in the failed 2016 coup. In January, the Greek Supreme Court ruled that the soldiers would be unlikely to receive a fair trial in Turkey. Turkey was furious, but Ankara expressed willingness to exchange the two Greek soldiers for the eight Turks, a negotiation Tsipras resoundingly refuses.

Turkey and Greece have been at odds over a string of territorial issues — land, sea and air — for decades. The so-called dog fights over the Aegean, where Greek and Turkish airplanes violate each others’ airspace, have continued. In a single day in February, Turkey violated Greek airspace over 30 times. The same month, Turkish and Greek coastguard vessels collided near the Imia islands; Ankara claims it was accidental.

While security experts agree there is no plan on the Turkish side to stage an actual offensive on Greece — indeed, Turkey’s foreign ambitions lay to its southern border — the deepening tensions between the two countries are emblematic of Erdogan’s increasingly confrontational foreign policy, and the ramifications are being felt in Greece.

“What we've seen in the Aegean and with the detention of the two soldiers is symptomatic of something larger in Turkey, rather than being specifically related to Greece. We have seen the same brinkmanship in Afrin and in taking nationals of Germany and the United States hostage. In that sense the two Greek soldiers are in the same pattern,” Gareth Jenkins, an Istanbul-based political analyst, told Al-Monitor by phone.

And the ongoing escalation of political rhetoric between Greece and Turkey has recently played itself out in one of the most peculiar of places: Kinaros, a tiny Greek island that is one of the 18 islets the Turkish government has publicly claimed belongs to Turkey.

Kinaros is home to only one person, Irini Katsotourhi. Last week, in light of Katsotourhi losing her state bonus — but also in light of her being the sole resident on an island Turkey is trying to lay claim to — the Hellenic Entrepreneurs Association (EENE) “adopted” the widow, assuming all her financial and medical needs.

EENE likened the septuagenarian Katsotourhi to a Spartan at the Battle of Thermopylae, a reference to the ancient war when Greek Spartans led a brave, but ultimately failed, resistance to the much stronger Persian army. From the Greek perspective, the historical parallel, now aimed toward Turkey, still stands.

“The need to defend our national interests concerns all of us. The call is for national conscience, vigilance and decisive contribution and generosity, to each one’s ability,” EENE stated. Though Katsotourhi has been elevated to something of a national hero in Greece, the news did not reach the local Turkish press.

Nationalistic fervor is running high on both the Greek and Turkish sides. The naming dispute between Greece and the former Yugoslav Republic of Macedonia (FYROM) has stoked nationalistic feelings across Greece, resulting in large-scale protests. Over the weekend, right-wing Greek groups burned the Turkish flag in a public demonstration. Ibrahim Kalin, spokesman for Erdogan, likened the act to a hate crime and demanded the arrest of the Greek protesters.

Such events have forced the Syriza government into an awkward position of maintaining diplomacy with Turkey while seeking help from the EU and NATO, and publicly declaring that it will defend its national borders. Opposition parties have taken advantage of Syriza’s delicate situation by taking a more hard-line, nationalistic approach on both the FYROM and Turkish issues.

Meanwhile in Turkey, over the last two to three years, Erdogan has “adopted a very Turkish nationalist stance,” Jenkins said. Citing Turkey’s economic woes and the depreciation of the lira, he noted that Erdogan is perpetuating a sense of importance on these issues to distract from domestic tensions. “I don’t think this is part of a calculated strategy. Rather, [Erdogan] sees this as an opportunity to strengthen his nationalistic Turkish muscle,” he added.

However, as Turkey becomes an increasingly volatile state actor, it has become difficult to separate Erdogan’s posturing from possible action — and though it might not be specifically directed at Greece, as Turkey’s closest EU neighbor, Greece will undoubtedly feel whatever shockwaves come from Turkish foreign or domestic policy. It remains to be seen how — or if — the EU and Turkey will be able to reconcile at a summit in the Black Sea port city of Varna on March 26.

“I think we are getting close to a breaking point,” Jenkins said. “It can’t go on like this indefinitely — but when and how this will break I don’t know.”