Is Greece Turkey’s new site of confrontation with the West?

Turkey may escalate the tension with its NATO neighbor in a move to display its displeasure over NATO's — namely Washington's — stance on Syrian Kurdish groups. 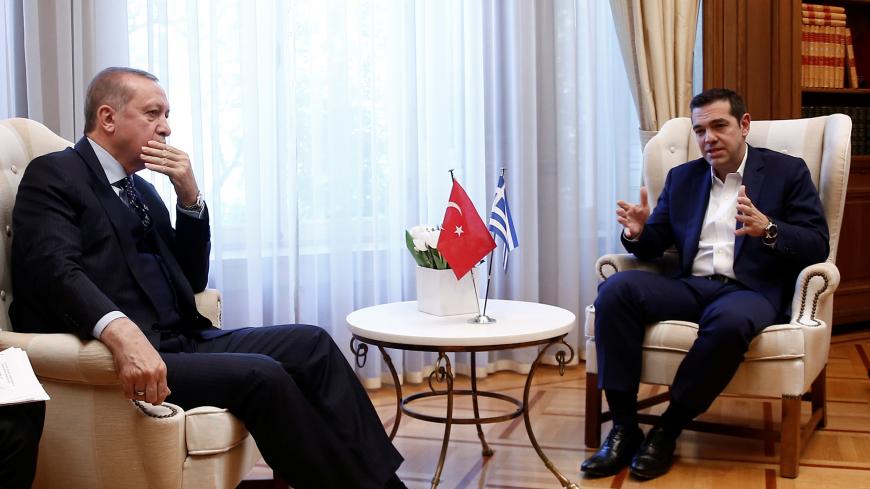 ATHENS, Greece — Arriving in Athens this month, I never thought I would find myself in an atmosphere reminiscent of the troubled 1980s. At that time, I was a frequent visitor to Greece and I followed the country's elections, when Greek politicians were riding anti-Turkey sentiments among the public for political gain.

The sources of conflict between the two NATO neighbors were numerous: the delineation of the Aegean Sea continental shelf; the delimitation of territorial waters; an airspace dispute; minority rights; and, above all, the Cyprus issue. Turkey and Greece had come to the brink of war in 1996 over several islets off the Aegean coast. Both sides claimed dominion over the islets. The administration of President Bill Clinton averted a possible war with the skillful diplomacy of now-deceased diplomat Richard Holbrooke.

However, since 1999, Turkish-Greek relations have warmed to the extent that, although no single issue was resolved, the prevailing sentiment was that Turkey and Greece could exist amicably in the Eastern Mediterranean, despite all the bilateral conflicts.

This sentiment dramatically changed March 1 when two Greek soldiers strayed across the Turkish border during a patrol and were detained by Turkish authorities. A new page has now opened in bilateral relations, placing us back at square one, just as we were in the '80s.

From the Greek perspective, the trespassing was accidental and usual; there was no reason to make a big fuss about it. From the Turkish perspective, it was a violation of Turkish borders, an intrusion into a sensitive military zone and possibly an act of espionage that has to be assessed by the “independent Turkish judiciary,” according to Turkey’s state-owned Anadolu news agency.

I arrived in Athens just hours after the incident. The taxi driver who drove me to the city center muttered the most banal and eternal cliche of bilateral relations: “The people of Turkey and Greece are siblings. We have no problems. It is the goddamn politics and politicians,” he said after learning I’m from Turkey.

However, the narrative of the 1980s was seemingly back. Busy with its military operation in Afrin, Syria, and its charged domestic political agenda, Turkey is not aware of the heightened worries in Greece over the future of relations with Turkey. To the Greeks, President Recep Tayyip Erdogan is a reincarnation of an Ottoman sultan who is trying to revive the dream of recovering the lost empire — and that means territorial expansion via military aggression.

The Turkish military operation in Syria, and the parlance adopted vis-a-vis Greece, serve as a self-fulfilling Greek prophecy in this respect. A prominent architect based in Greece told me that she is very much tormented by the feeling that Erdogan’s Turkey may attack Greece in the future because “he feels himself a sultan and thus is obliged to act in the way his forefathers acted,” she said.

This is becoming a commonplace sentiment in Athens. Notis Papadopoulos, a columnist at the prestigious Greek daily Kathimerini, put that sentiment into words in a more sophisticated manner in his March 9 commentary. He wrote, “Greece has suddenly found itself facing a crisis in the Aegean against a Turkish President Recep Tayyip Erdogan who keeps adding fuel to the fire on every front. Turkey has rammed a Greek patrol boat near the Imia islets and prevented drilling in Cyprus’s exclusive economic zone, and now it is sending to trial two Greek soldiers in an unnecessary escalation of a commonplace incident on the Greek-Turkish border."

Papadopoulos criticized the government of Prime Minister Alexis Tsipras for engaging in harsh polemics against domestic political rivals instead of demonstrating true leadership to "unite the Greek people behind a common cause."

Tsipras’ main rival, Kyriakos Mitsotakis, the leader of the main opposition party New Democracy, lashed out at the Greek prime minister because of his cautious attitude against Turkey during a March 8 parliamentary speech.

“The threat from the East” was a widely used phrase coined by Andreas Papandreou, a titan of Greek politics in the 1980s who politically benefited from his anti-Turkey rhetoric. Although I have not heard the phrase during my recent visit, the situation could provoke a revival of it.

Greek legislative elections are expected to be held in 2019. It is a foregone conclusion that it will be a very tight race between incumbent Tsipras and Mitsotakis. In such an atmosphere, the issue of Turkey will occupy a central place on Greece’s domestic political agenda.

Columnist Costas Iordanidis voiced the same sentiment in the Kathimerini newspaper. “We are a nation of orators, of bombastic pundits, and occasionally also of heroic outbursts that leave the universe speechless," he wrote March 9. "Even though Greece was a creation of European diplomacy, nothing would have been achieved without the War of Independence against the Ottoman Empire. We should never forget this.”

Thus, the near future indicates at least an escalation of hostile verbal intercourse. Some also voice concern that Erdogan might escalate the Aegean conflict with Greece to show its displeasure over NATO's — namely, Washington's — stance on Syrian Kurdish groups.

Any friction between Turkey and Greece would inevitably become a NATO problem. Moreover, Greece, an EU member, could serve as a transition country for Turkey — not only for the refugees Turkey holds as a trump card in its relations with the EU, but also for Turkey’s misgivings about the West.

For an increasingly nationalist Turkish regime, which needs animosity and even confrontational relations with the West to consolidate its support, a confrontation with Greece, given its deep historical background, is functional.

The detention and arrest of the two Greek soldiers was not an isolated incident. Turkish-Greek relations are more than bilateral; they are a function of Turkish interaction with the Western world. Yet this does not alleviate rising Greek worries about a dangerous escalation between the two sides of the Aegean.