Ankara and Athens both could have lots to gain if they're able to turn goodwill gestures into concrete solutions to their common problems. 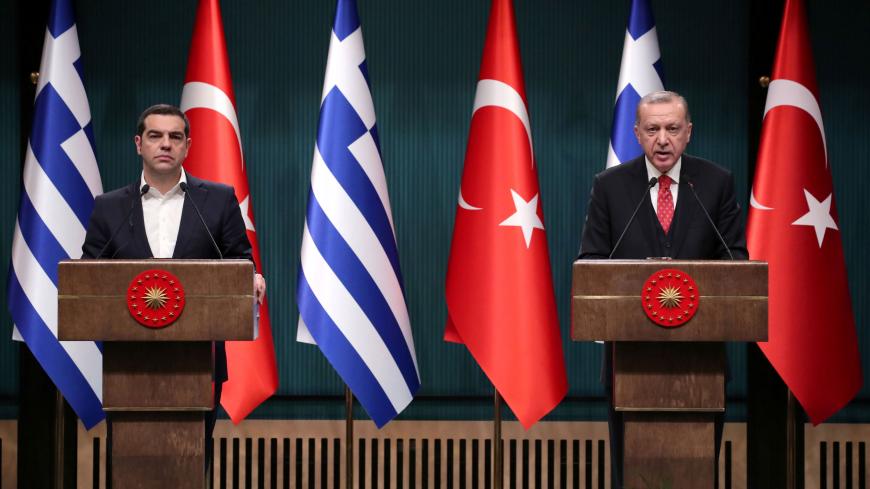 The recent visit of Greek Prime Minister Alexis Tsipras to Turkey generated major interest in both countries. Although this was Tsipras’ third visit to Turkey since he took over in 2015, it was his first visit to Ankara and to offer friendly photo opportunities with Turkish President Recep Tayyip Erdogan. The Greek leader then headed straight to Istanbul.

The most striking part of his Istanbul visit Feb. 5 was the trip to Heybeliada Halki Seminary, the Greek Orthodox theological school that has been closed since 1971. He said reopening the school would be a "sign of friendship." To the surprise of many, Tsipras also visited the orthodox church inside the seminary and lit a candle, despite his secular approach to government, and participated in a short service conducted by Patriarch Bartholomew in the Church of Hagia Triada (Church of the Holy Trinity).

Sources who have intimate knowledge of the visit told Al-Monitor that in return for these major gestures, Erdogan asked for Tsipras' support for Turkey’s next bid to join the European Union, planned for after the local elections March 31. According to the same sources, who didn’t want to be identified, Tsipras’ visit and the warm welcome extended to him could be a prelude to a new honeymoon period between the two countries, despite militarized tension between Ankara and Athens.

The Cyprus problem, naval jurisdiction in the eastern Mediterranean, territorial waters and exclusive economic zone and air space disputes are among the major problems between the two capitals. In the political sphere, diplomatic disagreements also need to be resolved: problems regarding the Turkish minority in Greece and Greeks in Turkey, and Greece granting asylum to people Turkey accuses of terror crimes.

The timing of the visit was also significant. The resignation of Greece’s nationalist defense minister, Panos Kammenos, has allowed Tsipras room to maneuver in relations with Turkey. Kammenos, leader of the Independent Greeks, or ANEL party, is known for his uncompromising attitude toward Turkey.

Moreover, Tsipras is an influential leader whose charisma was helpful in solving the 27-year conflict between Greece and the Macedonian republic. The resolution of this problem also gave him some leeway to tackle the decades-long Cyprus issue. Tsipras is now able to tell his public that Greece's influence and diplomatic power in the region is growing.

Another important reason for Tsipras’ visit was an economic one. The two neighbors struggling with common economic woes are focusing on new transportation and tourism projects. Indeed, special attention was paid to the launch of maritime links between Turkey’s Aegean coastal province of Izmir and Greece’s Thessaloniki for passenger and cargo movement. Other projects include introducing rapid railroad links between Istanbul and Thessaloniki, and completing a second bridge at the Ipsala border crossing to facilitate tourism exchanges.

One other major issue discussed was energy. The Turkish Stream gas pipeline, which will carry Russian natural gas across the Black Sea to the European side of Turkey and farther on to the border with EU countries, is envisaged to stretch to Greece from westernmost Turkey, then to southern and Central Europe through northern Greek territory.

The project, which bypasses Ukraine in transferring natural gas from Russia to Europe, requires cooperation between Turkey and Greece.

Tsipras has been seriously lobbying in Moscow to ensure Greece’s involvement in the Turkish Stream project. Moscow might have signaled Tsipras that improving ties with Ankara is a precondition for Greece’s inclusion in Turkish Stream. So while Moscow is probably happy with the latest visit, the same can't be said for Washington.

Like many analysts, I also wonder if in the coming months Athens and Ankara will be able improve their ties by reaching some level of success in solving their mutual problems.

We'll have to wait for Erdogan’s return visit to Greece to see the answer. I believe, should Turkey's ruling Justice and Development Party (AKP) achieve a significant success in the March local elections, that success would grant Erdogan four years of breathing room to thaw the frozen issues, including Cyprus and the Aegean dispute. Thus, Greece might be one of the first stops on Erdogan’s agenda after the elections.

But there is an unmentioned impediment: Like Tsipras, who freed himself from nationalist Kammenos, Erdogan too has to free himself from his nationalist ally — the Nationalist Movement Party. If realized, Erdogan’s visit to Athens will therefore carry extraordinary symbolic value.