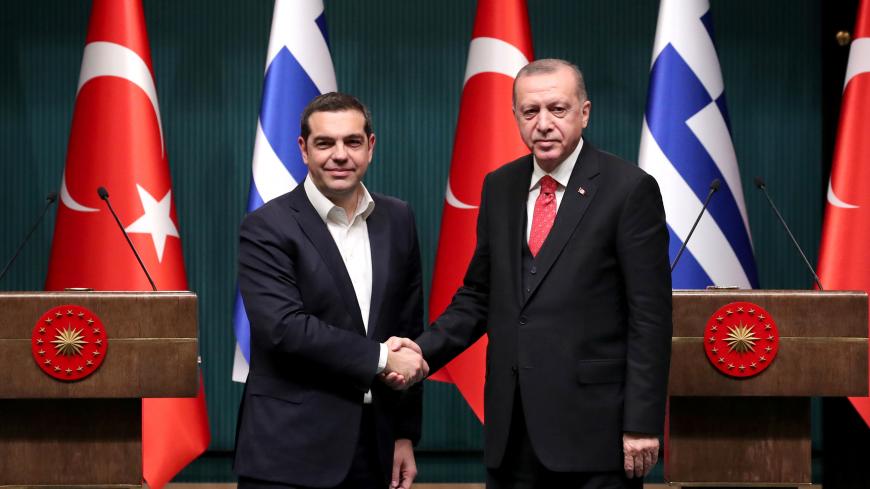 ANKARA, Turkey — Greek Prime Minister Alexis Tsipras concluded his visit to Turkey today with no deal to settle any of the disputes between the rival nations. But both he and President Recep Tayyip Erdogan sent unusually positive signals of their aim to improve ties.

“The president told me that we have nothing to sign today, but he added that maybe we will have the next time we meet,” Tsipras told reporters at the press conference with Erdogan. He spoke of the occasions when he has managed to de-escalate confrontations by calling Erdogan, and that Erdogan always took the call.

For his part, Erdogan said “a politician's job is not to win enemies but friends."

Erdogan said they had discussed improving transport links such as a ferry service between Izmir and Thessaloniki, and a high-speed train between Istanbul and Thessaloniki. And the two leaders agreed to meet later this year in Thessaloniki, the northern Greek town where Ataturk was born.

Tsipras said the two countries had agreed to reduce tension in the Aegean Sea and proceed with confidence-building measures, but he did not give details. The maritime and airspace borders of the Aegean have never been clearly defined, leading to frequent charges that Turkish warplanes are violating Greek airspace, and standoffs between the rival navies over possession of uninhabited islets.

Tsipras, who arrived in Turkey on Tuesday afternoon, spent Wednesday touring the landmarks of Greek culture in Istanbul. He went to the Hagia Sophia, the Byzantine basilica built in A.D. 537 by Emperor Justinian I, and stared at a fresco of the Madonna and Child.

"You can feel the burden of history here," Tsipras told AFP.

At a previous Erdogan-Tsipras summit in Athens in 2017, the Greek leader expressed concern about Muslims praying in Hagia Sophia, which had served as a mosque after the Islamic conquest of Istanbul in 1453 until Ataturk made it a museum in 1935. But last year, Turkey’s top court rejected an application by Muslim activists to resume prayers in Hagia Sophia.

Tsipras then went to Heybeliada, an island off Istanbul, to visit the Greek Orthodox Church seminary, becoming the first Greek head of government to do so. He was welcomed by Patriarch Bartholomew, who gave him a tour of the school, whose desks are now empty, where he himself trained as a priest.

Turkey closed the seminary in 1971 during tensions with Greece over Cyprus. The move violated the 1923 Treaty of Lausanne, under which Ankara is obliged to allow freedom of education to its Greek minority. Athens and Washington have long urged Turkey to reopen the seminary, but Erdogan seeks reciprocal concessions from Greece toward the Turkish-speaking minority in Thrace.

Bartholomew conducted a short service for the prime minister in the seminary’s ornate chapel. Tsipras lit a prayer candle and placed it upright in a sandbox, but was not seen to be praying.

“I want to believe that the day is approaching when these rooms will be filled again with the laughter of happy students,” Tsipras said in a speech at the seminary. "Next time I come, I hope we reopen the school with Erdogan."

At the joint press conference, Erdogan raised the issue of the Turkish-speaking minority in Greece, which numbers more than 100,000 people, saying he expected Athens to treat them as fairly as Ankara treats its 3,000 Greek-speaking Turks.

The Turks in Greece have two main grievances. Athens insists on appointing their religious leaders, arguing the state has ultimate authority. And Athens does not allow their organizations to carry the word Turk or Turkish in their titles, apparently fearing this would give Turkey a territorial claim to eastern Greece.

Tsipras did not address these issues during the visit. His answers to questions showed he wanted to avoid controversy. But he did say at Heybeliada: "The minorities in Greece and Turkey are no reason for conflict but are here to build bridges."

At the press conference, Erdogan pointed to the case of the eight Turkish soldiers who have received asylum in Greece after fleeing Turkey in a helicopter following the coup attempt of July 15, 2016.

“Our expectation of Greece is that it should not become a safe haven for members of terrorist organizations,” Erdogan said.

Tsipras replied: "Coup plotters are not welcome in Greece." But, he added, the government had to respect the decision of the Greek courts, which had ruled against the soldiers’ extradition on grounds that they would not get a fair trial in Turkey.

On Cyprus, which has been divided into a Turkish north and a Greek south since 1974, Tsipras called for a "fair and lasting" settlement. But the frequent collapse of UN-mediated negotiations has shown that such an ideal is elusive. The two communities of Cyprus have very different ideas of what constitutes a “fair” division of power and territory.

In the meantime, Turkish warships occasionally put a stop to off-shore energy exploration authorized by the recognized Cypriot government, which is Greek Cypriot. Cyprus protests the Turkish navy’s interference, but Turkey counters that the seabed resources belong to Turkish Cypriots as well as Greek Cypriots.

"I believe that we, as Turkey, can peacefully solve all issues with Greece on the basis of fairness," Erdogan told reporters.

Separately, Turkey condemned the decision of French President Emmanuel Macron to declare April 24 as a day of remembrance for the Armenian genocide.

“Allegations of a so-called Armenian genocide are political lies lacking any legal basis,” Erdogan’s spokesman Ibrahim Kalin said in a statement. “They are null and void for Turkey.”

“Nobody can accuse Turkey of a crime it has not committed,” Kalin added.

Turkey has accepted that as many as 300,000 Armenians died during World War I, but it says they were killed during ethnic clashes in which many Muslims died. It argues there was no systematic killing of Armenians so the word “genocide” does not apply. However, Armenians say up to 1.5 million of their people died, either being killed or dropping dead on deportation marches for which adequate food and water were not supplied.

Macron’s declaration made good a promise from his 2017 election campaign.

The French president said he had informed Erdogan of his decision in advance as he did not wish to break communications with Turkey.

"We have disagreements over the fight against the Islamic State, human rights and civil liberties in Turkey," Macron said. "We also have points of agreement such as the necessity for a political transition in Syria. As such, dialogue with Turkey is indispensable."

However, Kalin was not moved by such talk. He accused Macron of trying to deflect attention from the months of “gilets jaunes,” or yellow vests, protests in Paris and other cities.