The election victory of Greece's leftist Syriza party was cause for celebration among Turkey's Kurds and its marginalized left wing, both of which are seeking more electoral power. 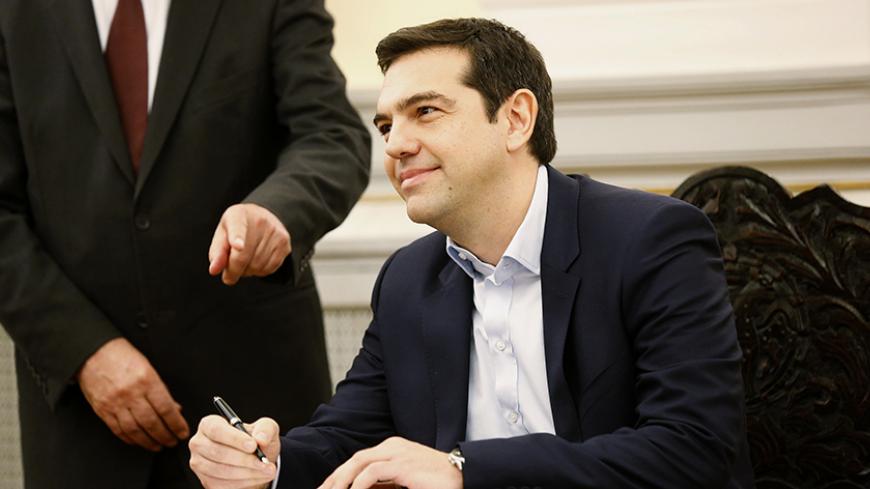 Late at night on Jan. 25, more than 500,000 Twitter followers of Selahattin Demirtas, the co-chairman of the pro-Kurdish People’s Democracy Party (HDP) in Turkey, were dumbfounded by seeing him tweet in the Greek Cyrillic alphabet, which is fully incomprehensible to Turks.

But, for careful eyes, the same tweet was reproduced in Turkish below the one in Greek. It said: “On the road for the downtrodden and workers, bon voyage, my brother.”

‬A Turkish-Kurdish political leader born in 1972 was hailing a two years younger Greek counterpart on his election victory, wishing him well and calling him “brother.”

Even if it comes from a Turkish politician with a Kurdish origin, it would have been unthinkable about a decade ago to call a Greek counterpart a “brother.” Turkey and Greece were two words always pronounced jointly ever since the end of World War II, but never in fraternal terms.

Though joint recipients of the Marshall Plan that became NATO members jointly in 1952 and applied for membership for the EEC, the precursor of today’s European Union, they were considered each other’s nemesis. The emergence of the Cyprus question pitted them against each other and, since 1974, so have the questions on the Aegean Sea that they share, ranging from continental shelf to territorial waters to airspace.

The two countries that constituted the southeastern flank of the NATO have become a permanent headache for the United States. In 1996, the two countries had, once more, come to the brink of war because of a dispute on the sovereign rights on a small, unpopulated rocky islet on the Aegean. The intense telephone diplomacy of Richard Holbrooke averted the war, therefore the collapse of NATO’s southeastern flank. That was the Imia/Kardak incident US President Bill Clinton made fun of in his memoirs.

Greece became a member of the EU while Turkey declined to apply at the time. Greece managed to use its EU membership to block Turkey’s entry. It augmented the seemingly intractable problems of the two neighbors. The Greek national security doctrine in the 1980s was shaped against “the threat coming from the East” and two countries’ historiography stated that the national independence of each was won against the other.

Abundant commonalities from their common heritage were simply forgotten.

In Greece, being anti-Turkey had been a lowest common denominator for the parties on the right mainly, but also for those on the left and Turkey’s political spectrum had reciprocated in being anti-Greece when it came to issues of a nationalistic agenda.

The exceptions were confined to peace activists on both sides of the Aegean and to internationalists, mainly on the far left. Syriza, the new radical left of Greece that won a stunning electoral victory Jan. 25, was the most outspoken of those in Turkey’s neighbor.

Syriza was amazingly vocal in Turkey’s Taksim-Gezi upheavals in the summer of 2013. Its banner in English during Gezi that read "The Sea Separates Us but the Dignity Unites" was unforgettable for Turkey’s young activists. Also, one of Gezi’s victims targeted by police bullets, Berkin Elvan, 14 — of Alevi origin — became a symbol of solidarity for Syriza. The posters carrying his image with the slogan (also in Turkish) “You are our brother, Berkin” were seen during the Greek election campaign.

Syriza is very sensitive to the Kurds’ plight in and around Turkey. A Syriza delegation visited the Turkish-Kurdish frontier settlements near Kobani in November, while the Kurds were engaged in their epic resistance against the Islamic State (IS).

It's striking that the liberation of Kobani from IS coincided with the electoral victory of Syriza. While people were celebrating Syriza’s victory in Athens, the Kurds in Istanbul, Diyarbakir and Suruc, the border town right across from Kobani, were dancing in the streets, also saluting Syriza.

Turkey’s public opinion, as a matter of fact, learned that Syriza has organic relations with two Turkish parties: HDP and the Freedom and Solidarity Party (ODP). The latter was founded in 1996 and it is the real replica of the Syriza in Turkey. It was the coalition of a number of quasi-Marxist far-left parties of 1970s Turkey. It has been in constant contact with those who later formed Syriza. However, the ODP never succeeded to get over 0.1% of the vote in Turkey’s elections.

The HDP is a different story. The core is the Kurdish Peace and Democracy Party (BDP), which is close to the positions of the Kurdistan Workers Party. The BDP, under the instructions of the imprisoned leader Abdullah Ocalan, decided to expand to ally mainly with the Turkish left, and transformed into the HDP to run it as a wider, Kurdish-Turkish pro-democracy leftist party. Its co-chairman, a relatively young and appealing politician, Demirtas, ran as a candidate for presidency in August and got very close to 10% of the votes, very near the national threshold in parliamentary elections. Previously, the Kurdish vote for the BDP and its predecessors was always around 6% to more than 7%.

Demirtas’ appeal, therefore, fueled the hopes of the pro-Kurdish HDP by attracting some Turkish constituency. It may reach the national threshold in the June 2015 elections.

If HDP remains below 10% in June, given Turkey’s complex electoral system, the ruling Justice and Development Party may win enough seats to amend the constitution to Recep Tayyip Erdogan's liking so that he can introduce the executive presidential system he has in his mind.

But, if the HDP reaches the threshold, those hopes for a presidential system with Erdogan will be dashed. The risk was passionately debated and now with Syriza’s victory in Greece, HDP, as its sister party in Turkey is emboldened and encouraged.

HDP’s envoy (of Armenian origin) was among the first to congratulate Alexis Tsipras, the new Greek prime minister on the night of jubilant celebrations in Athens. The moment Demirtas circulated his tweet of congratulation to his “brother” Tsipras, Garo Paylan was shaking his hand at the podium prepared for his victory speech in Athens.

Milliyet columnist Asli Aydintasbas spoke to Tsipras and reported that he was somewhat stunned with the jubilation in Turkey for his electoral victory. He found it “very pleasing and very encouraging.”

The most inspired have been Turkey’s marginalized leftists, who feel it's time for regeneration if not a renaissance. But more than anything else, it has rekindled the hopes of the HDP to attain the 10% national threshold. The HDP, under Demirtas, who is becoming the hope of Turkish democrats wary of Erdogan’s increasing authoritarian tendencies.

Tsipras had started his campaign with Leonard Cohen’s “First We Take Manhattan.”

Demirtas may well begin with, “First in Athens with Syriza, now with the HDP, here in Turkey.”