President Mahmoud Abbas and the Hamas movement welcomed the victory of the Syriza Party in the Greek elections, which promised during its electoral campaign to work on recognizing the Palestinian state. 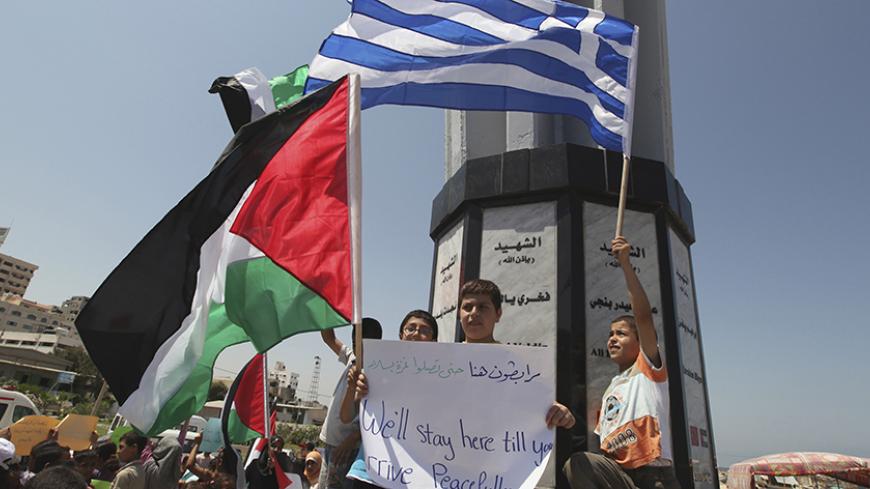 Palestinians hold flags during a rally in support of a Gaza-bound flotilla at the Gaza seaport, July 3, 2011. - REUTERS/Mohammed Salem

The victory of the Greek Syriza Party, which won 149 out of 300 parliamentary seats, has brought major concerns for Israel but was welcomed by the Palestinians. The radical left-wing party scored a decisive victory in the snap elections held Jan. 25 in Greece.

Palestinian President Mahmoud Abbas as well as the left-wing Popular Front for the Liberation of Palestine and the Islamic Hamas movement were among those to congratulate the Greek people with the election results.

The Greek elections were mostly about economic issues. The anti-austerity party has promised to stop the painful policies that have been imposed on Greece by Europe and world leaders. This rebellious spirit will be a major challenge to some of the leaders of the European Union. Germany and the United Kingdom are unhappy with the results of the elections, while French President Francois Hollande was among the first to congratulate the Greek leader citing the friendship that unites France and Greece.

It's easy to understand why Palestinians welcomed the left-wing Greek party's victory, given the party's actions and statements of its leaders that clearly oppose the Israeli occupation. Clause 38 of the political program of the Syriza party opposes cooperation with Israel and supports Palestinian rights. It states: “Abolition of military cooperation with Israel. Support for creation of a Palestinian state within the 1967 borders.”

In 2011, party leader Alexis Tsipras, 40, was among the Greek activists who were scheduled to board a Gaza-bound flotilla called The Audacity of Hope, aimed at breaking Gaza’s siege. The flotilla never left the Greek port having been stopped by the Greek government, most likely under pressure from Israel.

Tsipras was also a vocal opponent to the Israeli war on Gaza last summer during an anti-Israel demonstration in Athens at the time. “Seeing Israel killing children in Palestine is unacceptable. We should unite our voices and forces so as to live in peace, expressing our solidarity to the Palestinian people,” he said.

The images of four Palestinian children killed while playing on a Gaza beach moved Tsipras. “When civilians and children are killed at beaches facing the same sea that borders the European continent, we cannot remain passive, because if this happens on the other side of the Mediterranean today, it can happen on our side tomorrow,'' Tsipras said.

It is not clear how quickly the newly elected prime minister will move in fulfilling his party’s promise to recognize the state of Palestine. In Western Europe, only Sweden has publicly recognized Palestinian statehood.

Tsipras' success sent shock waves to Israel. Leading newspapers lamented the bad news that this success will have for Israeli-Greek relations. Israeli media reported that since 2008 Israel has enjoyed very close ties with Greece. Some Israeli analysts, however, argue that when in power, candidates often tone down their rhetoric.

They point out that the new foreign minister in the Tsipras administration, Nikos Kotzias, is not a member of the prime minister’s party. Before being chosen for the top diplomatic position, Kotzias wrote a blog post calling for “mediation between Palestinians, Israel and Iran.”

While most of the attention of the Greek elections has been on economic issues and the potential of the distancing from Israel, Arab Christians are taking note of the new Greek leader’s position vis-a-vis the powerful Orthodox Church.

Tsipras met with the Greek Orthodox archbishop and asked him not to officiate the swearing-in ceremony. This is the first time that a Greek prime minister holds a civilian rather than a religious ceremony. For Palestinian and Jordanian Christians who are fighting the hegemony of the Greek bishops in the Jerusalem patriarchate the anti-church victory might bring some good news.

Arab Christians have been publicly protesting the current patriarch with signs that read “undeserving.” Attempts to bring Arab leadership in the church hierarchy have been blocked since the 15th century, after the death of the last Arab church leader, Patriarch Atallah in 1492. Greek flags fly over many Orthodox Church properties in the Holy Land, much to the chagrin of exclusive Arab parishes. If the revolt for Arabization of the church continues, Palestinian Christians will find strong support in Athens.

The current head of the Palestinian mission, Marwan Tobasi, headed the Arab Orthodox Conference, which succeeded in 2005 to stop attempts to sell church property to Israel. Many lands in Jerusalem and Bethlehem are owned by the church — often donated in times of war to protect it. The church is officially not allowed to sell land but it can give long-term leases. The current Israeli Knesset, for instance, is built on land that is leased by the church to the State of Israel.

The victory of the Syriza Party has given hope to many Palestinians that global popular changes are being translated to more serious political empowerment. While it is unclear if the Greek victory will result in a speedy recognition of Palestinian statehood in the way the results of the Swedish elections did, the news from Athens can only be described as badly needed good news for the Palestinians.