What do attacks on Turkey's pro-Kurdish party mean?

Simultaneous bombing attacks against the pro-Kurdish People's Democracy Party show that Turkey may be heading toward a wild finish in key June 7 parliamentary elections. 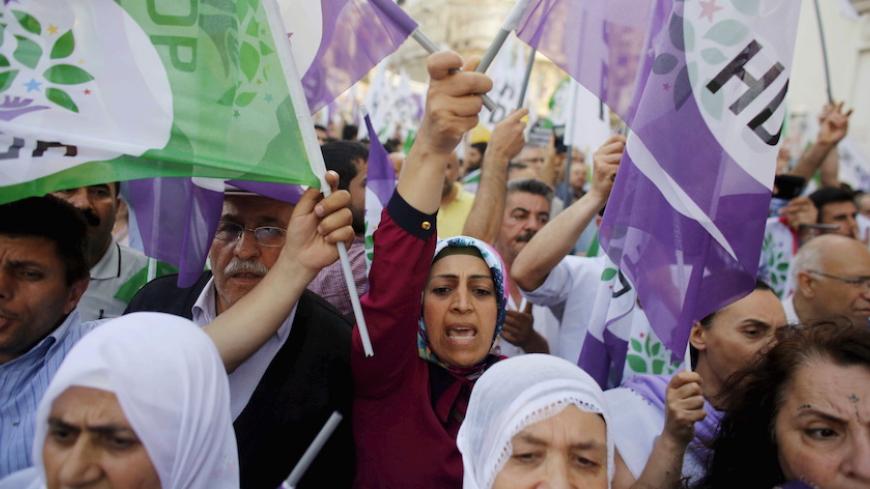 Supporters of the pro-Kurdish People's Democracy Party shout slogans during a protest against attacks on their party offices, in central Istanbul, May 18, 2015. - REUTERS/Murad Sezer

As Turkey's fateful June 7 election approaches, harassment of the pro-Kurdish People's Democracy Party (HDP) — the “wild card” in the elections —  has escalated. At the end of last week, social media reported that 122 attacks had targeted HDP election offices and bureaus in 60 of Turkey's 81 provinces, or three-fourths of the country.

The digital news platform Diken published what it called “The Map of Shame" showing where the HDP has been targeted.

The harassment reached its most dangerous level at the beginning of this week. On May 18, simultaneous bomb attacks hit the party’s bureaus in the Mediterranean cities of Adana and Mersin. Adana is the fourth-largest city in Turkey and Mersin is among the top 10; both have large Kurdish populations.

The bombs devastated HDP offices and wounded three people, one seriously. The Mersin incident miraculously spared the life of the highly popular chairman of the party, Selahattin Demirtas, and other officials as the explosion went off a few minutes before Demirtas' expected arrival. It could therefore be interpreted as an attempt on Demirtas' life.

Demirtas ran against President Recep Tayyip Erdogan during the presidential elections in August and won an unexpected 9.8% of the vote, which emboldened his party to run in the upcoming elections in hopes of surpassing the national election threshold of 10% to get into parliament; the threshold is the highest in any parliamentary democracy in the world.

Since the beginning of the election campaign, Demirtas has been continuously assailed by Erdogan and Prime Minister Ahmet Davutoglu. Erdogan, whenever he appeared in rallies held in Kurdish-populated areas, waved the Kurdish translation of the Quran and alleged that Demirtas is an infidel; Erdogan has been desperately trying to get back the votes of pro-AKP Kurdish religious people who are thought to have shifted their support to Demirtas' HDP in the aftermath of the Kobani resistance in Syria. The Kurds in Turkey, irrespective of their political tendencies, are said to be offended by Erdogan's harsh remarks against the defenders of Kobani. His statements were interpreted as his wish to see Kobani fall to the Islamic State rather than remaining as an epic stronghold of the Kurds.

Davutoglu, too, referring to the leftist credentials of Demirtas, declared that he would not use the first name of the HDP leader anymore because he is the namesake of Saladin Ayyub, who regained Jerusalem from the Crusaders and is thus very dear to Muslims.

The desperate campaign of AKP leaders against the HDP and Demirtas has a rationale. If the HDP passes the 10% threshold in the upcoming elections, it could end the dreams of the current power holders. If the new Turkish parliament has 60 HDP members, it could be impossible for Erdogan to put together the votes he needs to amend the constitution to create a presidential system to his taste. Under such a scenario, it also may not be possible for the AKP to form a single-party government, as has been the case since 2002.

The AKP is firing all its big guns at the HDP and Demirtas in an attempt to push it below the 10% threshold. If the HDP remains below 10%, the AKP will get more than 50 parliament members more than it deserves as a result of the intricacies of the Turkish electoral system. This can give Erdogan the necessary parliamentary votes to achieve his plans for the presidential system.

Prior to the election campaign, there was wide speculation in Turkish intellectual circles that the ruling party and imprisoned Kurdistan Workers Party (PKK) leader Abdullah Ocalan had reached a deal. Accordingly, the Kurds would back Erdogan’s move to a supposedly one-man presidential system in return for setting a timetable for freeing Ocalan.

However, at the outset of the election campaign, Demirtas made a dramatic single-sentence statement and declared that the HDP will never give way to Erdogan to realize his ambitions for a presidential system.

Since, not only Kurds but many urban Turks who do not want to see Erdogan with enhanced and legalized new presidential powers have expressed their desire for the HDP to get over the 10% election threshold, seeing it as the only way to block Erdogan’s ambitions.

The HDP, believed to be indirectly affiliated with the notorious PKK, has paradoxically become a hope for the future of democracy in Turkey. Hence, it has become the “wild card” of the upcoming elections. Whoever visits Turkey nowadays will be confronted with the major question everybody asks each other: “What do you think? Will the HDP get 10% or not?”

Demirtas has galvanized the wrath of the AKP leaders, who are doing their utmost to discredit and undermine him. The smear campaign against him has been such as to jeopardize the "peace process" with the Kurds that has contributed to Turkey’s stability over a two-year period.

Deputy Prime Minister Yalcin Akdogan, an Erdogan confidant who is considered to be in charge of the peace process, recently said, “If the HDP remains below the threshold, it would be super good for the country.” He claimed that the peace process would not be affected if the party is sidelined and accused the HDP of being “the subcontractor and the assassin of the Front of Evil.” For him, the “Front of Evil” is all those domestic and international groups opposed to the AKP and Erdogan's ambitions.

The escalation of harassment against HDP members has occurred against such a background. It seems that those who conducted the anti-Demirtas and anti-HDP campaigns — including Davutoglu and Akdogan — did not anticipate the dangerous levels it could reach, condemning Adana and Mersin to being attacked.

Many worry that election security is not guaranteed and will not be guaranteed on the day of the election. This could mean that the HDP's passing the 10% threshold might not just depend on the electorate, but on officialdom as well. There are worries that there might be a lot of election rigging by AKP leaders to push the HDP below the election threshold.

The widespread belief in the Turkish public is that the government circles — Erdogan, above anybody else — who are closely following the polls are getting increasingly nervous about the HDP's chances. Although some polls claim the HDP is still around 9.8%, most, including the credible ones, agree that the HDP is past the limit. According to those surveys, the HDP is expected to win between 10.5% to 12%.

These figures explain the increasing nervousness on the part of AKP authorities and the increasing harassment against the HDP. As the message is sent to the public that an HDP with a higher profile in the system will be more problematic for the future of the country, it is expected to deter some against voting for it; this could push the HDP down below the national threshold.

The target of all such machinations, Demirtas, has been displaying an unusual serenity. After the Mersin explosion that could have taken his life, he did not cancel his party's rally in the city, and said, “Peace in the country is much more precious than getting elected to the parliament or even than ... life.” He said that for Turkey, June 8 is as important as June 7: “Peace cannot be jeopardized for the sake of gaining votes.” He left his last words for Erdogan, who did not condemn the bombings against the party, saying, “We’ve received the message. And here is our response: We will not let you be the president of the presidential system you wish to be.”

Demirtas is further challenging Erdogan by saying, "We, as the HDP, will transform the lion in your heart to a kitten.”

On the eve of such fateful elections, with such a “wild card” and wild intentions of those in office in Turkey, the country may be heading toward the lawless wilderness.