A Turkish plan to bail out Greece?

After decades of disputes, can Turkey and Greece once again look to each other as allies? 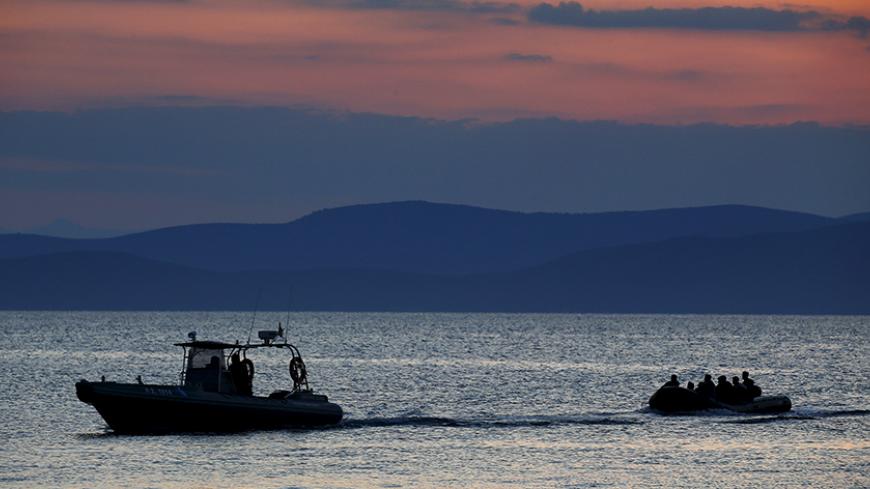 A dinghy with Syrian refugees is towed by a Greek coast guard patrol boat into the port on the Greek island of Kos, following a rescue operation in a part of the Aegean Sea between Turkey and Greece, early May 31, 2015. - REUTERS/Yannis Behrakis

While international attention is focused on Turkey’s Syrian border, the Turkish people are focused on their other border, the one with Greece. They watched closely July 5 as the Greek people voted no to the European bailout program.

The fact that the Turks felt compassion toward their Greek neighbors is ironic given the bitterness of their relations (at times bordering on going to war) in the last decades of the 20th century.

The destinies of these neighboring countries seemingly were sealed together. They both were the recipients of the Marshall Plan in the wake of World War II. They became NATO members simultaneously in 1952. They were the first two countries that signed association agreements with the then European Economic Community (EEC) that came into being by the Treaty of Rome in 1957. Greece signed it in 1961 and Turkey in 1963.

Their entry to the European Union (EU) was expected to be simultaneous, too. However, in 1974, the Cyprus question culminated in Turkish military intervention, which cut the island into Turkish and Greek halves. This destroyed the relationship between the two countries for the next 20 years. A number of problems other than Cyprus surfaced, ranging from disputes over the continental shelf of the Aegean Sea, territorial waters, the Flight Information Region over the Aegean international airspace, etc. Skirmishes between the navies of these NATO allies in Aegean waters and confrontation of their air forces at the brink of dogfights in the Aegean air space became routine.

Greece, which is regarded as the birthplace of democracy, was invited by the EU for membership. Valery Giscard d’Estaing, president of the French Republic and a Hellenophile, pioneered it. As a courtesy, Turkey was asked to apply as well.

Turkey’s center-left leader, Bulent Ecevit, the “conqueror of Cyprus,” turned down the offer because of an infantile leftist understanding that had gripped the Turkish left for more than a decade. The anti-EU motto that had prevailed since the days when the EEC was commonly called the Common Market was still in effect: “They are common, we are the market!”

The Turks believed that the capitalist sharks of the EU would exploit the Turkish market to their benefit.

Turkey turned down the invitation, and Greece joined the EU in 1981 and immediately became the main stumbling block on Turkey’s road to EU integration, if Turkey so wanted. And Turkey did actually want it after sobering from the short-lived period of Ecevit’s premiership.

The 1980s was a decade of ever-growing Greek hostility toward Turkey. The first decade that Greece become an EU-member state was marked by endless competition between two political titans and charismatic figures: Andreas Papandreou of Greece’s Socialist Party (PASOK) and Konstantinos Mitsotakis of the center-right Nea Democratia (New Democracy Party).

There were too many re-run elections during the 1980s, and the anti-Turkey theme during the vigorous election campaigns was an important stepping stone to an electoral victory. Papandreou was more vitriolic in his remarks on Turkey than his rival Mitsotakis. He is the one who coined the concept “Threat from the East” and designed a security policy and a strategy accordingly. Although Papandreou had a reputation of having grudges against the EU, he made good use of EU funds to get the support of rural Greece, which had been incessantly whipped up by the anti-Turkish hysteria.

I was a frequent and privileged visitor to Greece in the 1980s. I was on the campaign trail of both Papandreou and Mitsotakis many times.

My privileged status resulted from receiving the prestigious Abdi Ipekci Award, which is given to those who contribute to “friendship and peace between Greece and Turkey.” The award ceremony was attended by political leaders such as Mitsotakis and Evangelos Averoff. The award was handed to me by the legendary Greek composer Mikis Theodorakis, who had organized a concert in our honor at the Piraeus Municipal Theater.

However, I was denied an entry visa and banned from entering Greece for five years at the end of the 1980s. My “crime” was to follow one of the Greek elections in Western Thrace, the home of Greece’s Turkish minority. The official Greek position was that they were Muslims, not Turks. Any ethnic reference in Greece to the Turks was denied and regarded as dangerous. And I, as someone who was coming from the “East” of Greece, had constituted a “threat” for the unity of the Greek people, despite my credentials of contributing to friendship and peace.

The devastating Turkish earthquake in 1999 saw the Greeks as the first to extend a helping hand to their neighbors on their Eastern flank. In the wake of this catastrophic earthquake, a new generation of political figures altered the nature of the relations between the two countries dramatically. Two foreign ministers, George Papandreou (son of Andreas) and Ismail Cem of Turkey, put their efforts into the resumption of the fraternal relations between Turkey and Greece.

Also, the self-confidence Greece began to feel under savvy Prime Minister Costas Simitis was effective in developing good feelings between the two countries.

Then came the days of Greece’s economic and financial crisis during the first decade and a half of the 2000s. The relations between the Turks and Greeks, paradoxically, was very different than the 1980s, with hordes of Turkish tourists coming “from the East” to the Greek islands in the Aegean and generating a better life for those Greeks in the forgotten corners of a financially beleaguered Greece.

As the owner of a summer house for 30 years across the Greek island of Kos, a few miles away from the Turkish coast, I am one of those thousands of Turks addicted to traveling to the Greek islands every summer.

Two years ago, on board the yacht of a friend, we were sailing toward the harbor of the Greek island of Leros. The small bay was spotted with scores of yachts flying American flags. “Leros seems to be under American invasion,” I said to my friend, joking. “No,” he said, “they are all Turkish yachts. To evade taxes, most of them are registered in Wilmington, Delaware, in the United States, just like my yacht. But Greeks know it, and when they see American flags in the horizon, they are delighted and shout, ‘Turks are coming.’”

There could not be more irony to the “Threat from the East” with the “Turks from the East” coming with US flags and bringing loads of Euros with them.

The engagement of the Turks and Greeks, mostly in the contested zone of the Aegean, boosted Turkish sympathies of Greeks in their difficult days. Syriza’s electoral victory in Greece in January 2015 was hailed by the Turkish society in general. The pro-Kurdish Peoples’ Democratic Party, the rising star of Turkish politics, posed itself as the sister party of Syriza.

The Turkish public opinion felt a sense of solidarity with the Greek people in their saga with their creditors — EU’s Eurozone led by Germany, European Central Bank and the International Monetary Fund (IMF).

The Turkish press, despite being preoccupied by the ongoing political crisis in the wake of the elections, paid exceptional attention to Greece’s referendum on July 5.

On the day of the referendum, the Hurriyet’s headline was “Sizi seviyoruz kardas,” which means “We love you, brother.” That was Greek Prime Minister Alexis Tsipras’ statement for Turkey and the Turks. Brother is “kardes” in Turkish, the last letter is pronounced as “sh.” The Greeks cannot pronounce “sh,” and the Hurriyet printed it the way Tsipras mispronounced it. He made that statement to the Hurriyet reporter he met at the rally in Athens on Saturday where he asked the Greek people to say “Oxi” (No) to the bailout package offered to Greece by the EU.

It is still unknown how the contest between Greece and the EU will unfold. Yet one thing is certain: Pro-Western Turks are very concerned with Greece’s destiny, and they are ready to extend whatever support they may give in order to prevent Greece’s economy from collapsing.

Greece’s $270 billion financial crisis is formidable, and Athens missed a $1.8 billion loan repayment to the IMF. But several Turkish members of parliament are magnanimous enough to make proposals that Turkey should take the burden and let Greece pay it back later in installments.

Greece’s financial crisis is far from being resolved, but in hard times Greece learned that it could rely on the fact that there is no “Threat from the East” exploiting its hardships. On the contrary, “Compassion from the East” is predominant.

Maybe the fates of the two countries can be sealed once again when one day the Turks look toward the West, again.