Trump hints he may be open to 'bigger' Iran deal

US President Donald Trump suggested he might be open to French President Emmanuel Macron’s idea for a bigger deal to address concerns about Iran. 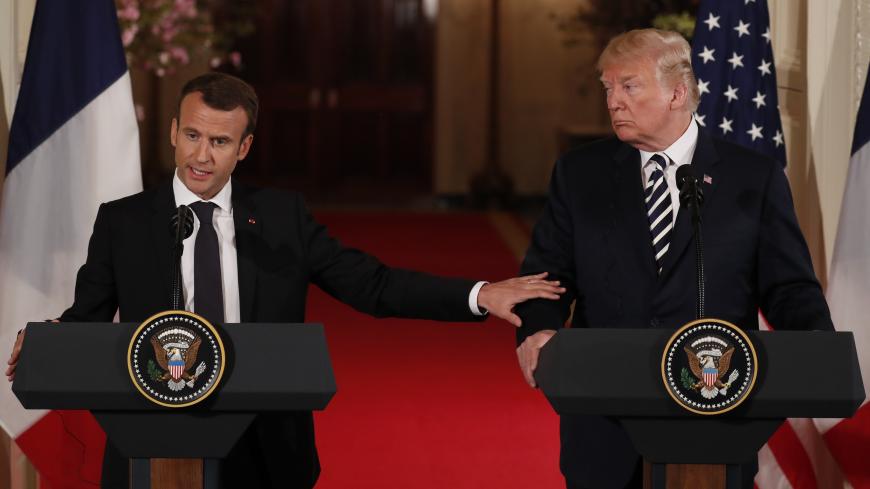 French President Emmanuel Macron reaches out to US President Donald Trump as he speaks during their joint news conference at the White House in Washington, April 24, 2018. - REUTERS/Jonathan Ernst

WASHINGTON — Speaking at a joint press conference with French President Emmanuel Macron, US President Donald Trump suggested he may be open to Macron’s idea for what Trump called a “much bigger” Iran deal that would address concerns about Iran’s ballistic missile program and regional presence.

“I think we will have a very good shot at doing a much bigger … deal,” Trump, standing with Macron at lecterns in the White House East Room, said Tuesday. “We'll know fairly soon.”

Macron said he and Trump had discussed his idea for a framework on Iran that has four pillars. The first pillar would preserve the 2015 Iran nuclear deal to deal with concerns about Iran’s nuclear program until the year 2025. The second would ensure that Iran never gets nuclear weapons after that. The third would address concerns about Iran’s ballistic missile program and proliferation. The fourth pillar would address concerns about Iran’s regional activities and seek longer-term stability in the region, including by finding a political solution to the Syria civil war after the defeat of the so-called Islamic State.

“We therefore wish, from now on, to work on a new deal with Iran,” Macron, speaking through a translator, said. “I therefore would like us to commit to that effect in the weeks and months to come.”

“What we have to work on, obviously, with Iran and the different parties in the region … is to find a fair deal where we can fix the overall situation,” Macron said. “This is the only way to preserve sovereignty in the region and build peace in the very long run. Otherwise, we will have to come back in the region because of new terrorist groups, for sure.”

“We will have to find a way to fix the [Syria] situation from the political point of view,” Macron said. “Which means, to set up a series of agreements, part of this big deal, in order to be sure that Syria tomorrow will be a sovereign country with inclusiveness and free people in a situation to decide for the future. This is very important, and that's our duty.”

Macron acknowledged that he doesn’t know what Trump is going to do on May 12, the next deadline for the United States to issue Iran nuclear deal-related sanctions waivers. Trump vowed in January that he would not renew the sanctions waivers if three European powers, or the E3 — France, Britain and Germany — do not agree to address his concerns about “sunset” provisions in the Iran nuclear deal, Iran’s missile program and support for militant proxy groups in Syria, Lebanon and Yemen.

Talks between the United States and the E3 have resulted in progress in drafting the text of a set of understandings on those issues, diplomats have told Al-Monitor, but it has been unclear to the diplomats involved in the talks what Trump will decide to do.

"What was important and new this morning is that President Trump has agreed to put on the table with France the idea of a new agreement to be proposed and worked on with the Iranians,” a French official said Tuesday.

“Regarding Iran, we have a disagreement regarding the JCPOA [Joint Comprehensive Plan of Action], but I think we are overcoming it by deciding to work toward a deal — an overall deal that will enable us to deal with the nuclear issue but also treat it together with another three issues, which were not being dealt with so far,” Macron said.

Trump did not say what he was going to do on May 12 — whether he would be willing to build on the JCPOA to come to a set of agreements to address the other concerns, as Macron suggested, or would seek a new agreement altogether.

“Nobody knows what I'm going to do on the 12th, although, Mr. President, you have a pretty good idea — but we'll see,” Trump said. “But we'll see also, if I do what some people expect, whether or not it will be possible to do a new deal with solid foundations. Because this is a deal with decayed foundations. It's a bad deal. … It should have never been made, and we're going to see what happens on the 12th.”

“But I will say, if Iran threatens us in any way, they will pay a price like few countries have ever paid,” Trump added. “OK?”

But after Macron referenced the United States, France and the United Kingdom working together on joint strikes over Syria chemical weapons use this month, Trump spoke of the virtue of flexibility — and he said he considers it a true honor to call Macron his friend.

“I think that we have very much in common, I must say,” Trump said. “You know, in life you have to be flexible. And as leaders of countries, you have to show flexibility. And I think we actually get along on many of the subjects we discussed today.”