Iran lashes out at US-French dealmaking

Iran lashes out at Trump and Macron’s floating of the idea of a “new deal” that will address the future of the Iranian nuclear program and other issues. 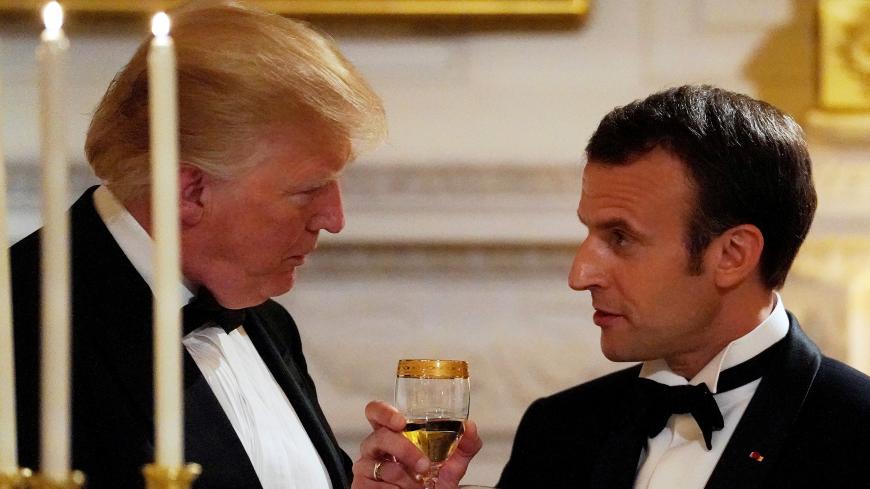 Concurrent with French President Emmanuel Macron's trip to the United States, Iranian President Hassan Rouhani has warned Europe about going over Iran's head to reach a deal with Washington regarding the Joint Comprehensive Plan of Action (JCPOA).

Macron appears to be offering US President Donald Trump a “new deal” to persuade him to remain in the nuclear deal, which was achieved in 2015 between Iran and the P5+1 countries (United States, United Kingdom, France, Russia, China and Germany).

In a joint press conference with Trump on April 24, Macron stated, “Regarding Iran, we have a disagreement regarding the JCPOA. But I think we are overcoming it by deciding to work toward a deal — an overall deal that will enable us to deal with the nuclear issue but also treat it together with [other] … issues, which were not being dealt with so far.” The deal Macron spoke of includes Iran’s ballistic missile program and its regional influence.

In reaction to Macron’s proposal, Rouhani said in a press conference during his trip to the northwestern province of East Azerbaijan on April 25, “At present, the United States is on trial because it hasn't lived up to its commitments, and if Europe wants to satisfy Trump, it better spend out of its own pocket and not Iran's.” He added, “Not a single sentence will be added or removed from the [JCPOA].”

Moreover, in a separate speech on April 25, Rouhani said, “Together with a leader of a European country, [Trump] says: 'We want to decide on an agreement reached by seven parties.' For what? With what right? We have shown our goodwill to the world. We showed the world that [the tenet of] Iranophobia was a lie.”

The secretary of Iran's Supreme National Security Council, Ali Shamkhani, also reacted to a possible agreement between Europe and the United States about the future of the nuclear deal.

In a speech April 25 at the ninth International Meeting of High Representatives for Security Issues in the Russian Black Sea resort town of Sochi, Shamkhani stressed, “Any agreement that Europe and America reach about the future of the JCPOA and the future of Iran’s nuclear program for the period after [the expiry of] the predicted limitations under the JCPOA is invalid and worthless.”

He added, “I assure you that their dreams about Iran will certainly not come true. Renewed talk about the period of the end of limitations on Iran’s peaceful nuclear activities is tantamount to the destruction of the JCPOA as … the normalization of Iran’s nuclear program under the [nuclear] deal is an important part of the commitment that was given to Iran.”

Under the nuclear deal, certain restrictions on Iran's uranium enrichment program will expire in 2025, although the country commits itself under the JCPOA to never develop nuclear weapons and to open its doors to a long-term regime of the most rigid international inspections.