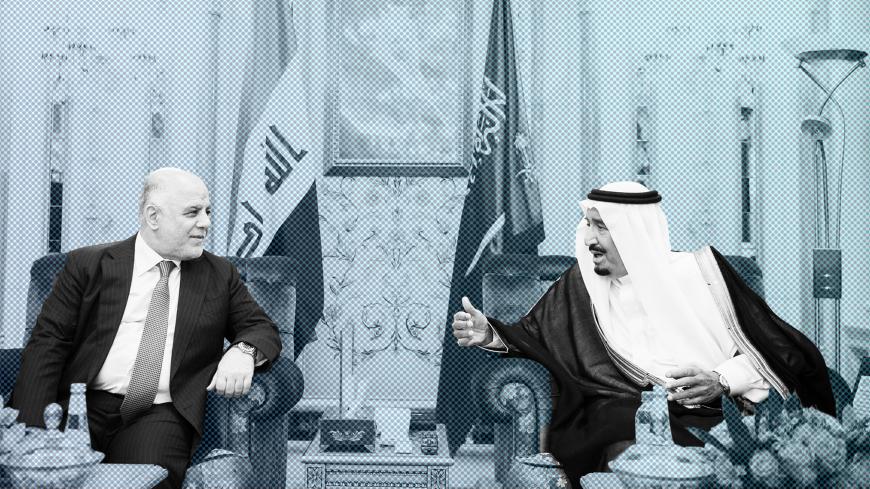 Saudi Arabia is considering investing in 2.5 million acres of agricultural land in Iraq's western province of Anbar, which has suffered both economically and otherwise after the bitter war to regain control of the province from the Islamic State. If such an investment is made, it would be facilitated by the Saudi-Iraqi Coordination Council, which was formed in October.

The Iraqi Ministry of Commerce announced the potential investment in a brief statement to the press April 4, but did not disclose any further details on the matter.

Iraqi-Saudi relations have remarkably improved since mid-2017, particularly after Iraqi Prime Minister Haider al-Abadi visited Riyadh in October. During that visit, an announcement was made on establishing the Saudi-Iraqi Coordination Council, in the presence of Abadi, Saudi King Salman bin Abdul-Aziz Al Saud and then US Secretary of State Rex Tillerson.

The council aims to develop economic relations at all levels between Iraq and Saudi Arabia after nearly three decades of estrangement. It also seeks to open land borders, encourage investments, review the customs cooperation agreement and study the establishment of a trade zone.

The Ministry of Commerce’s media office declined to provide Al-Monitor with any details on the potential Saudi investment in Anbar.

However, Yahya al-Mohammadi, a member of the Anbar provincial council, told Al-Monitor that officials in Anbar were indeed in contact with the Saudi Embassy in Baghdad, adding, “Provincial officials have noticed a Saudi desire to broadly invest in Anbar.”

A Iraqi political source told Al-Monitor on condition of anonymity about the nature of the investment project in Anbar, its economic feasibility, and all related security and political aspects.

The source said the prospective investment will largely be "in the area of Nukhayb, which lies on the borders of the province of Karbala and is also adjacent to the Saudi border.” The project "aims to build fields for breeding calves, as well as producing dairy products and drinking water.” Large dairy companies will likely be established, mimicking a number of successful projects in Saudi Arabia.

The source did not deny the security objectives behind the project. “This area is lacking in security," he said. "It is located on Saudi Arabia's border, and the two countries are trying to turn it into a labor-intensive business center, which brings stability to it rather than it posing a permanent threat to both countries.”

He said that, politically, “Saudi Arabia certainly seeks to expand in Iraq, but will not follow the Iranian example, which occupies the Iraqi market without employing the labor force in Iraq.” Saudi Arabia, he said, "seeks soft dominance in Iraq by creating jobs for Iraqis," which will make its "presence and influence in the political scene acceptable within the Iraqi society."

Nukhayb has long been a disputed area between Anbar and Karbala. Nukhayb is administratively affiliated with Anbar province, but Karbala demands that it be annexed to its administrative borders. Security tension is common there, but the area has been relatively stable for nearly two years now.

Mohammadi denied “an actual start of investment operations in Anbar.” He said, “Saudi Arabia and Iraq only discussed the projects put forward,” noting that “this is due to the security and political instability in Iraq.”

In fact, not many political forces and Shiite factions welcome the idea of Saudi Arabia coming to Iraq and establishing business operations there. This rejection was demonstrated in March, when the media reported an upcoming visit to Iraq by Saudi Crown Prince Mohammed bin Salman and, in response, Shiite factions and parties organized protests in a number of cities in Iraq.

Some Iraqi parliamentarians from Shiite blocs are seeking to pass a law similar to the American Justice Against Sponsors of Terrorism Act to sue Saudi Arabia for allegedly allowing its citizens to enter Iraq and commit acts of terrorism on its territory.

Mohammadi ruled out the possibility that this would intimidate Saudi Arabia and stop it from launching projects in Anbar. “The Iranian-Saudi conflict has a wide impact on the countries of the region," he said, "but Iraq’s neutral policy has been boding well so far, and I hope it continues to achieve what is in the interest of Iraq.”

Addressing whether Saudi Arabia fears for its investments in Iraq from pro-Iranian factions, Ansari said, “Saudi Arabia does not fear anyone and is capable of protecting its interests by all means, be it in the region or anywhere in the world.”

Iraq needs a very balanced policy in dealing with its conflicting neighbors Iran and Saudi Arabia, a fact that ought to be taken into account when either of these two countries wants to invest in Iraq, especially since both Iran and Saudi Arabia believe that investments are also a gateway to influence Iraq's political situation.