President Donald Trump’s pick for secretary of state is in trouble amid a backlash over his administration’s hawkish bent. 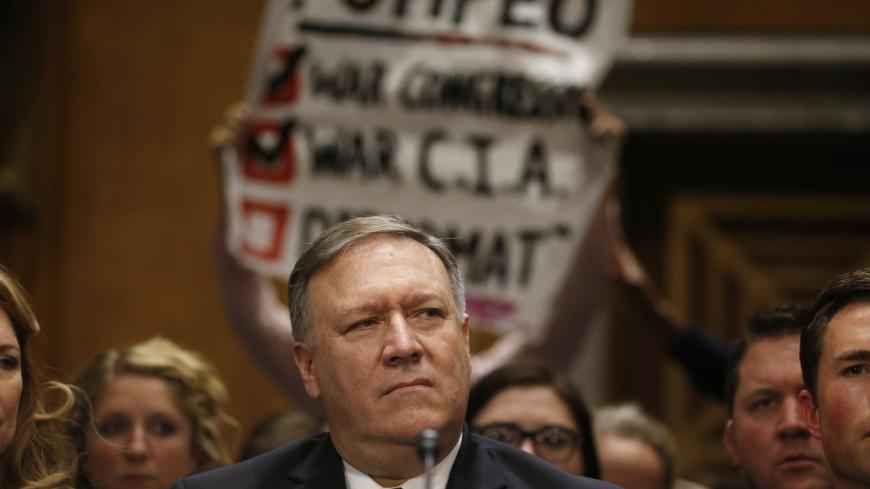 CIA Director Mike Pompeo testifies before a Senate Foreign Relations Committee confirmation hearing on his nomination to be secretary of state, on Capitol Hill in Washington, April 12, 2018. - REUTERS/Leah Millis

President Donald Trump’s pick to lead US diplomacy is in jeopardy because of his bellicose approach toward the Middle East.

CIA Director Mike Pompeo, the nominee for secretary of state, faced a barrage of criticism from Democrats during his Senate hearing today over his hawkish rhetoric on Iran and political Islamist groups. With Trump threatening to bomb Syria and pull out of the nuclear deal with Iran, lawmakers raised concerns that this week's arrival of the equally hawkish national security adviser John Bolton could precipitate US military action in the Middle East and other hot spots.

“A lot of people are paying attention to Syria and they’re asking the fundamental question, are we assembling a war Cabinet of John Bolton, Mike Pompeo?” asked Sen. Jeff Merkley, D-Ore. “People want to know whether or not your views are close enough to Bolton’s in his advocacy of force in virtually every situation.”

Pompeo sought to assuage those concerns while defending Trump’s right to retaliate for Syrian President Bashar al-Assad’s alleged use of chemical weapons without going through Congress. He insisted that as a member of Trump’s Cabinet, he had “watched it fully deliberate about all of those things and I can tell you every day at the forefront of our mind is how we can find solutions … to avoid us having to put a single American in harm’s way.”

And while he has previously advocated for pulling out of the Iran deal — and even bombing the country’s nuclear infrastructure — he left the door open at today’s hearing for the United States staying engaged, even if Trump resumes sanctions next month.

“If there’s no chance that we can fix it, I will recommend to the president that we will do our level best to work with our allies to achieve a better outcome and a better deal, even after May 12,” Pompeo told lawmakers.

Pompeo’s rocky reception in the Senate Foreign Relations Committee could imperil his chances to make it through the Senate, where the Republicans only have a 50-49 edge as Sen. John McCain, R-Ariz., recuperates from cancer treatment. With Sen. Rand Paul, R-Ky., aligned against him, Pompeo needs to woo at least one Democrat to get a favorable recommendation from the committee. Only two Democrats on the panel — Sens. Jeanne Shaheen, D-N.H., and Tim Kaine, D-Va. — voted to make him CIA director last year, and both have said they have concerns about his nomination this time around.

In fact, Al-Monitor has learned that Kaine’s office was the one that booked a Senate room on Monday for a briefing on Pompeo’s “anti-Muslim rhetoric and ties.” At the briefing, advocates denounced Pompeo’s past statement that American Muslims who did not vocally condemn the 2013 Boston Marathon bombings were “potentially complicit.” Sen. Cory Booker, D-N.J., expressed concern over Pompeo's statement at today's hearing.

“Your views do matter,” Booker told Pompeo. “You’re going to be dealing with Muslim states on Muslim issues.”

Booker also noted Pompeo’s ties to organizations widely considered to be Islamophobic, including Frank Gaffney’s Center for Security Policy and ACT for America. By Booker’s count, Pompeo has appeared on Gaffney’s radio show more than 20 times. Gaffney’s nonprofit distributed a letter this week signed by the directors of several other conservative think tanks and organizations praising Pompeo as a well-qualified candidate for the job, specifically citing his “upcoming decision about the future status” of the Iran nuclear deal.

During his three and a half terms as a congressman from Kansas, Pompeo was also one of the original co-sponsors of a bill to designate the entire Muslim Brotherhood organization as a terrorist group. Critics of such a move argue that it fails to distinguish between vastly dissimilar political Islamist groups.

Trump’s decision to tap Bolton as national security adviser has further stoked activists’ concerns, as he shares ties to many of the same groups. In fact, Al-Monitor has discovered that on the same day that Trump announced Bolton’s appointment, a nonprofit was registered in Washington at the same address as Bolton’s now-suspended super PAC. The so-called Institute for a Secure America lists Bolton as a director along with several other officers, including Matthew Freedman and Charles Kupperman, a former Center for Security Policy board member and Boeing vice president.

Pompeo defended his record, promising to “treat persons of each and every faith with the dignity and respect they deserve.” He added that the CIA had “saved countless thousands of Muslim lives” during his 15-month tenure as head of the agency.

Mindful of the uphill battle, Pompeo has met with several of the 14 Democrats who voted for him to become CIA director and face tough re-election battles in states Trump won in 2016. None have so far indicated they would vote for him, and one — Sen. Brian Schatz of Hawaii — announced his opposition in a tweet Wednesday.

“I voted YES on Pompeo for CIA on the theory that he would be the ‘adult in the room.’ I was wrong,” Schatz tweeted. “I am voting NO on Pompeo for Secretary of State because our top diplomat should believe in diplomacy. He has an alarming tendency towards military provocation and brinkmanship.”

Ironically, the last nominee who went to a Senate floor vote without a favorable committee recommendation was Bolton himself. President George W. Bush ended up installing him as ambassador to the UN under a controversial recess appointment in 2005.

Update: April 17, 2018. This article was updated with comment from a former John Bolton spokesperson regarding the status of the nonprofit Institute for a Secure America.