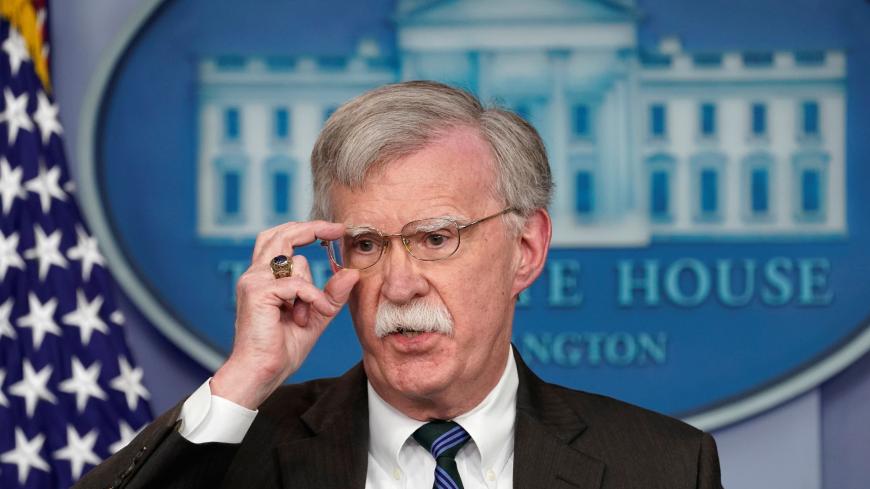 US National security adviser John Bolton asked the Pentagon to prepare options for military strikes against Iran last year, the Wall Street Journal reported Sunday. Bolton’s request came after a mortar attack last year in Baghdad’s Green Zone near the US Embassy in Iraq. The White House attributed the attack to an Iran-backed Shiite militia. It’s unclear if President Donald Trump even knew about Bolton’s request.

Why it matters: The leaks to US media outlets came shortly after Bolton doubled down on his hard-line Iran strategy by elevating Charles Kupperman, a longtime associate, to deputy national security adviser on Friday. Kupperman, a former Boeing and Lockheed Martin executive, previously served on the board for the Center for Security Policy, a far-right think tank advocating for a hawkish Iran policy founded by Islamophobic conspiracy theorist Frank Gaffney.

Institute for a Secure America: Bolton brought Kupperman and Matthew Freedman, another longtime associate, onto the National Security Council last year to vet new hires. As Al-Monitor first reported in April, Bolton, Kupperman and Freedman started a nonprofit — the Institute for a Secure America — the same day that Trump tapped him to head the National Security Council in March 2018. The three men also founded another nonprofit in 2015 — the Foundation for American Security and Freedom — to air ads against the Iran nuclear deal.

Bolton’s spokesman at the time characterized the Institute for a Secure America as an “unformed organization.” The spokesman added that Bolton had resigned before starting work at the White House in April 2018. However, Washington, DC's Department of Consumer and Regulatory Affairs still lists all three men as directors and the organization, which is registered to the same address as Bolton’s now-defunct Super PAC, as still active. Bolton did not list his role with the institute on his financial disclosure form in June 2018, even though federal guidelines require senior government officials to list nonprofit leadership. The White House did not respond to Al-Monitor’s request for comment by deadline.

What’s next: It’s still unclear whether the White House eventually received the Iran strike plans from the Defense Department, even as the Trump administration continues to ratchet up the pressure on Iran. But by making Kupperman his deputy, Bolton has indicated that he intends to double down on his “maximum pressure” campaign against Tehran.

Know more: Kupperman’s promotion comes after the White House hired another hawk, Richard Goldberg, to be director for countering Iranian weapons of mass destruction at the National Security Council, congressional correspondent Bryant Harris reported last week. Al-Monitor is closely tracking the impact of the White House’s pressure campaign on Iran. Read Saeid Jafari’s report on the impact the sanctions have had on Iranian students abroad.

by Murielle KASPRZAK and Joseph SCHMID | AFP | May 26, 2022
END_OF_DOCUMENT_TOKEN_TO_BE_REPLACED