Many of the 500 Palestinians being held without charge in Israel are rejecting their "day in court," which they claim is only used as a platform for Israeli propaganda. 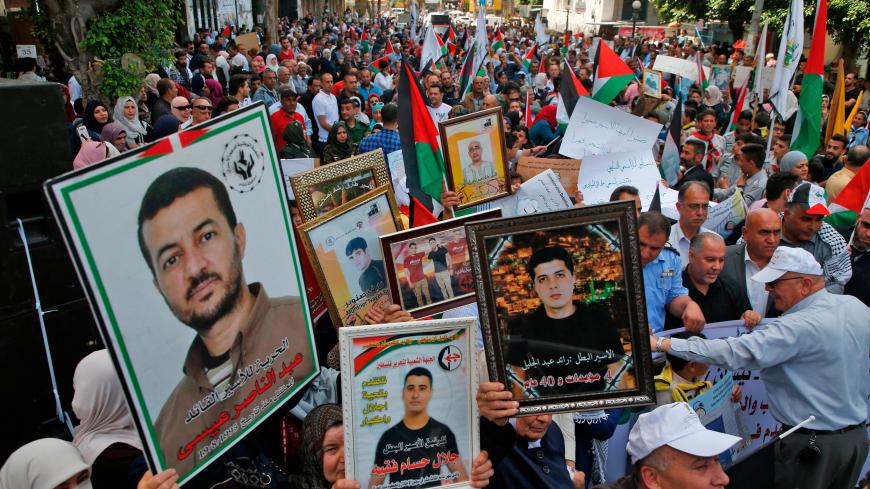 Palestinians hold portraits of relatives held in Israeli prisons as they demand their release during a demonstration to mark Prisoners' Day in Nablus, West Bank, April 17, 2018. - JAAFAR ASHTIYEH/AFP/Getty Images

RAMALLAH, West Bank — The annual Palestinian Prisoners’ Day observed April 17 focused on a boycott of Israeli courts by Palestinians whose lives are on hold while they are jailed indefinitely under administrative detention orders.

“We believe that the key to facing this unjust policy is boycotting the Israeli judicial body, which always tries to justify the ugly occupation. We will not let them promote their lies about their commitment to international law and about the presence of independent judicial supervision," the detainees said in a statement.

Qaddoura Fares, the chairman of the Palestinian Prisoners Club, told Al-Monitor the boycott is a stance rather than a step, and it shouldn't stop as long as even one prisoner remains under administrative detention.

He said, “Detainees will not benefit from stopping the boycott, and it will not hurt them to keep it up. It might even force Israel to cave and eliminate this detention [practice] once and for all."

Addameer Prisoner Support and Human Rights Association director Sahar Francis agrees that the boycott should continue and said that local and international public and official support is crucial. She told Al-Monitor, “Unfortunately, supportive action has not been taken yet, at least not the way it should be, as several issues are distracting the international and local public, like the Gaza Strip events, the return marches and confrontations in the West Bank."

Francis spoke about attempts to foil the boycott with renewed detention orders and threats to force administrative detainees to appear in court and to lodge complaints against lawyers with the bar association if they fail to cooperate. She acknowledged the boycott probably won't be enough to force Israel to halt such detentions entirely, but added, “We are realistic in setting our goal, which is to curb administrative detention."

Some detainees, however, believe the boycott is futile and say they're running out of options. Bilal Diab, who has spent a total of three and a half years in prison, said, “This is not the first time we've boycotted the courts, but each time, the detainees [gave in]."

Diab is free now but has been held in administrative detention numerous times, including once in 2011 when he went on a hunger strike for 78 days and pressured the Israeli authorities to release him. He told Al-Monitor, “This boycott is pointless, as it actually relieves Israel. The best solution is turning to the Supreme Court because this bothers Israel more and would reduce the number of administrative detentions.”

Fouad al-Khafesh, the director of the Ahrar Center for Prisoners Studies, concurred. He told Al-Monitor, “The enormous momentum involved in invoking the Supreme Court exhausts the Israeli security and judicial institutions. It also forces the Israeli public prosecutor to reveal the confidential files of detainees and to specify the charges on which they are detained."

He add, “The boycott would benefit the prisoners if there were support inside and outside. But in the absence of such support, the best that can happen is an agreement on some pending cases related to administrative arrest.”

For now, the confidential files of 500 Palestinian detainees remain stashed away in the drawers of Israeli prisons and prosecutors.