Palestinians in the West Bank are subject to Israeli military courts, which offer them little chance for justice, writes Jillian Kestler-D'Amours. 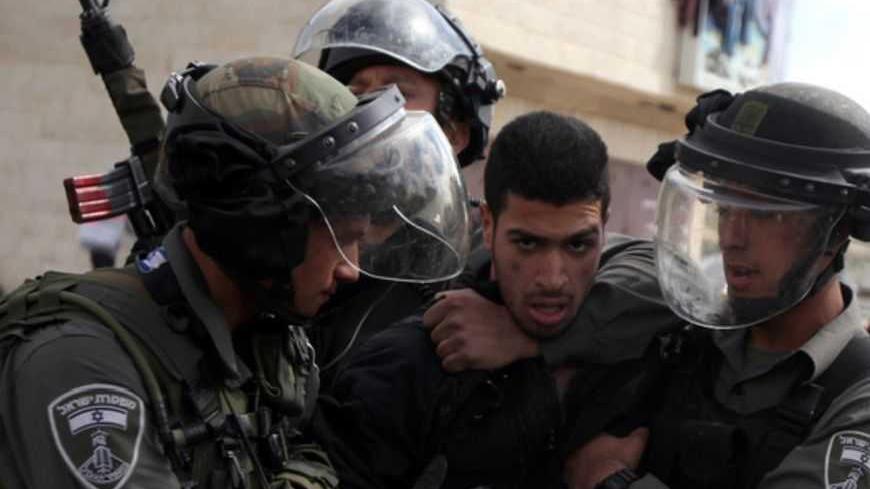 OFER PRISON, West Bank — Dozens of Palestinian men and women are caged in behind a grey metal fence topped with barbed wire. Some pace back and forth. Others sit on benches in silence. A group huddles together, whispering quietly. Each face is painted with a look of concern and uncertainty.

This is Ofer military court, and these men and women are waiting anxiously to see their loved ones, Palestinian detainees who will soon have hearings in the beige trailers serving as courtrooms on this Israeli military base.

“If we review the procedures in these military courts, it’s very hard to say that they follow fair-trial standards,” explained Sahar Francis, director of Addameer, a Ramallah-based organization supporting Palestinian prisoner rights.

Most Palestinian detainees brought to Ofer spend only a few minutes in front of a judge — an Israeli army officer, either on active or reserve duty. Wearing brown Israeli prison uniforms and shackled at their hands and feet, the prisoners' hearings are held entirely in Hebrew, with translations to and from Arabic by Israeli soldiers.

“The translation in these courts is not professional. There’s a problem with evidential procedures and the fact that they rely on secret materials. These are not fair trials,” Francis told Al-Monitor.

“Since the beginning of the occupation in 1967, when Israel immediately founded the military orders, which also established the military courts, they started to define all political activities in the occupied territories as illegal, including political parties, demonstrations, even publishing certain books.”

In recent weeks, people have protested in cities and villages across Palestine in solidarity with the over 4,500 Palestinian prisoners currently held in Israeli prisons. According to Addameer, Israel has detained approximately 800,000 Palestinians — or 20% of the total Palestinian population — since 1967.

The SPO, which serves as the criminal code for the West Bank up to this day, outlines the courts’ jurisdiction, arrest and detention procedures for Palestinian suspects and suggests punishment for crimes.

Israel presently operates two military courts, both of which are located on Israeli military bases in the West Bank: Ofer, near Ramallah, and Salem, near the northern West Bank city of Jenin. Israeli army officers act as both prosecution and judges in these courts.

According to a recent report in Israeli daily Haaretz, Palestinians paid 13 million shekels ($3.5 million) in fines to Israeli military courts — fees incurred after individuals are convicted of an offense — in 2011 alone.

In 2010, however, the United Nations Special Rapporteur on the Independence of Judges and Lawyers found that the “legal foundations and practices of the military justice system [in Israel] do not comply with international standards” and that “the exercise of jurisdiction by a military court over civilians not performing military tasks is normally inconsistent with the fair, impartial and independent administration of justice.”

“Matters which should be under the jurisdiction of a civil court (Palestinian or Israeli) are in many cases dealt with under the Israeli military system — a system that enjoys less independence and impartiality and does not effectively safeguard the individual rights of accused persons and suspects,” Weill found.

“This interference by the military legal system, taking broader territorial control than is authorized by international humanitarian law, is no more legitimate than any other kind of military domination merely because it is affected by a legal system.”

In 2011, Haaretz reported that almost all cases heard by Israeli military courts — 99.74% — resulted in convictions. The military appeals courts also overwhelming sided with Israeli army prosecutors, with 67% of appeals filed by the state accepted, versus only 33% filed by the defense.

Israeli human rights group B'Tselem also reported that of the 835 Palestinian minors that were arrested and tried in military courts between 2005 and 2010 on charges of throwing stones, only one was acquitted.

This reality highlights the widespread challenges attorneys face when trying to defend Palestinians charged within this system.

For many, especially attorneys who hold West Bank-only IDs, the first step of physically accessing Israeli prisons and military courts to speak with their clients is difficult. Military orders are also not made readily available to the lawyers, and transcripts of detainee interrogations are often incomplete and also difficult to access.

“There’s no legal handbook you can buy in a military bookstore. There’s almost no access to the laws or jurisprudence of the military courts,” said Israeli attorney Gaby Lasky, who regularly represents Palestinian detainees, in a report titled, “Defending Palestinian Prisoners.”

Secret evidence is also often used, which makes building a defense nearly impossible. This is especially true in cases of Palestinians held under Israeli administrative-detention orders, which allow Israel to hold Palestinians without charge or trial for indefinite periods and without disclosing any evidence to the defense on “security” grounds.

Unequal application of the law

Even after dozens of Israeli settlers vandalized vehicles on an Israeli military base and assaulted a top Israeli army commander in 2011, the Israeli military opposed a government suggestion that settlers also be tried in the military courts.

Prosecuting Israeli settlers in military courts would, IDF sources argued, “create further political rifts within the army, which they characterized as a strategic problem for Israel's military.”

“If a settler violates the law, or if a settler attacks a Palestinian or kills a Palestinian, they would be subject to the civil system inside Israel and receive all the protections [therein],” explained Addameer’s Sahar Francis.

“The Israelis were using this system and the policy of imprisonment to target hundreds of thousands of Palestinians all these years. This is what makes the cases of the prisoners very important. It needs lots of effort in order to protect [Palestinians] against such violations and grave breaches for the Fourth Geneva Convention.”